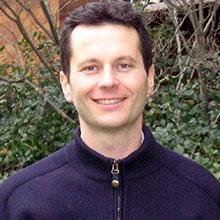 My primary research focus is on fisheries oceanography and marine ecology. I study the causes of temporal and spatial variation of marine populations, as well as the management implications of the factors involved. A substantial fraction of my work revolves around early life stages of fish, as in marine organisms, spatial and temporal variability at the population level is closely linked to events that occur during the very first few months or years of life. I have also worked extensively on the ecology of adult stages, predator-prey trophic interactions in marine ecosystems, and on dispersal and distribution patterns of scyphozoa jellyfish.

I particularly value merging the ecological and quantitative disciplines to study processes that affect the dynamics of marine populations in space and time. Thus, I work with modelers, statisticians, and fisheries biologists from both academic and management institutions to tackle practical problems that interface between ecology and management. I actively search for new methodologies from other disciplines that could be used to address practical problems in fisheries ecology. For example, many of my research investigations have required the development or application of principles from terrestrial ecology.

Below, I give examples of three ongoing projects and their eco-management implications.

Spatial patterns during the pelagic phase of fish early life-history stages are important to quantify the exchange of individuals among different aggregations in a population (i.e., genetic connectivity) and between spawning and juvenile nursery areas (i.e., ontogenetic connectivity). Dispersal and connectivity are particularly interesting topics for temperate and subarctic marine fishes, which the expectation is to have longer larval pelagic duration and less genetic diversity due to greater exchange of individuals subject to extensive passive drifts. However, contrary to these expectations, evidence accumulated to date indicates that even subarctic populations can have a high degree of genetic structure, but that the mechanisms that promote and maintain it are yet to be understood. In a recent study, Ciannelli et al (2010) analyzed the vertical and horizontal distribution of Atlantic cod (Gadus morhua) eggs in relation to small-scale circulation and water column hydrography in a costal location of southern Norway. We documented that cod eggs were found in greater abundance (1) in shallow water layers, which on average flow up the fjord (away from the open ocean), and (2) in the inner portion of the fjord, which is subject to lower current speeds compared to the outer fjord or the mouth of the fjord. Eggs were found to be neutrally buoyant at shallow depths – a trait that also favors local retention, given the local circulation. The same patterns held during two environmentally contrasting years. Our results importantly suggest that the observed population structure of Atlantic cod is favored and maintained by a balance between water circulation, egg characteristics, and reproductive biology of adults, and is robust against variation of hydrographic features.

To spawn, many marine fish species return to their natal site or to a nonnatal but repeated site. This remarkable adaptation allows individuals to increase their fitness by placing the progeny in a seemingly successful location. The selection of a spawning site is the end product of several bio-physical constraints to which species are subject through their life cycle, the most prominent being the survival of the offspring, encounters with potential mates, and temporal consistency of the site’s biophysical attributes. At a regional scale, spawning sites can be characterized by a combination of environmental attributes (e.g., temperature, salinity, geostrophic velocity), and geographic attributes (e.g., proximity to a bank, sill, canyon mouth). Geographically-determined spawning locations are fixed over time, while environmentally-driven locations may be labile. The degree to which species spawning sites are characterized by either fixed or labile attributes may depend on the species life history strategies, thus begetting the question of whether we can make any generalizations across species for how their spawning sites are selected. We have proposed a conceptual framework to link species’ spawning strategies with its life history traits. Specifically, we hypothesize that the home range of the adult stages (i.e., resident vs. migrant species), their social structure (i.e., schooling vs. solitary) and the feeding behavior of the larval stages (piscivory vs. zooplanktivory) are traits that correlate with the degree to which spawning sites are either geographically or environmentally fixed. We have examined case studies from several contrasting species, including Atlantic and Pacific cod (coastal and oceanic subpopulations), Alaska walleye pollock, Pacific sardine, northern anchovy, and three species of Mediterranean tuna. Besides having broad scientific appeal, the spatio-temporal characterization of spawning locations has also ecological and applied implications. In commercial species, for example, the spawning site is often the primary harvest and assessment location. Further, because the spatial distribution of fish is linked to their spawning locations, a characterization of the biophysical attributes of spawning sites provide insight on the lability of a species geographic range.

Species can distribute over space following environmental preferences, to optimize the use of spatially heterogeneous resources, and in relation to their own density, to reduce intraspecific competition. Typically, these two sources of variability have been studied in isolation – an unfortunate circumstance as the two processes very likely interact (i.e., the outcome cannot be attributed to either process in isolation). In a recent study (Ciannelli et al In press) we examined the spatial distribution of Arrowtooth flounder (Atheresthes stomias) in the Bering Sea, and showed that the expected increase in habitat extension during years of high population abundance, is in fact curtailed/enhanced during cold/warm years. The analytical framework developed to address our study gave statistical significance to the synergistic effect of abundance and temperature on arrowtooth flounder distribution, and can be readily applied to other study systems to address similar ecological questions.

33) SwartzmanG., Winter A., Coyle K., Brodeur R, BuckleyT., CiannelliL., HuntH., IanelliJ., and A. Macklin. (2005) Relationship of age-0 pollock abundance and distribution around the Pribilof Islands, to other shelf regions of the eastern Bering Sea. Fisheries Research 74 (1-3): 273-287