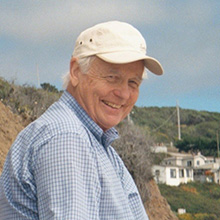 William Lawrence (“Larry”) Gates
1928-2022
Professor W.L. “Larry” Gates passed away in Hamburg, Germany on June 27 at the age of 93. William Lawrence Gates was born in Pasadena, California and received his B.S, M.S., and Ph.D. from the Massachusetts Institute of Technology (MIT), all in meteorology. His first employment outside the university was as a member (and later director) of the Numerical Prediction Project at the Air Force Cambridge Research Center in Massachusetts from 1953 to 1957. He then accepted an appointment as Assistant (and later Associate) Professor in the Department of Meteorology at University of California, Los Angeles (UCLA), where he remained until 1966 when he joined the RAND Corporation in Santa Monica as the Director of their Climate Program. In 1976 he became Professor and Chairman of the Department of Atmospheric Sciences (and founding Director of the Climatic Research Institute) at Oregon State University. Continuing to divide his career between research posts and academia, he returned to California in 1989 as the (founding) Director of the Program for Climate Model Diagnosis and Intercomparison (PCMDI) at the Lawrence Livermore National Laboratory, and later as the Director of the National Institute for Global Environmental Change at the University of California at Davis. Larry Gates is the author or co-author of more than 100 scientific papers and reports, and has been a member of numerous national and international panels, committees and working groups concerned with weather prediction and climate research. See Climate science just lost a visionary pioneer: Larry Gates and Mourning for Larry Gates to learn more. 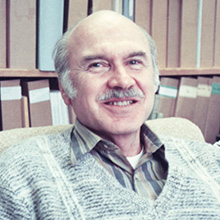 Louis Irwin Gordon
1928-2022
Associate Professor Emeritus Louis Irwin Gordon passed away June 25 at the age of 93. He earned his Ph.D. in Chemical Oceanography and then became an Associate Professor at OSU after an M.S. from Scripps. Lou mentored many students and contributed to the development of improved methods for the analysis of nutrients and gasses in seawater. Professor Emeritus Bob Collier wrote, "On March 11 and again on March 19, 1977, Lou Gordon dove to the seafloor with the submersible ALVIN discovering the Galapagos Hydrothermal vent field. He was part of one of the most important discoveries in the marine sciences (geology, biogeochemistry, hypotheses about the origins of life on earth). At the time, I was a mere graduate student on board, but developed a great respect for Lou – one that would influence my joining of the faculty at OSU as Lou's colleague. I enjoyed working with Lou for the rest of our mutual careers at OSU." Over the course of his career, Lou co-authored 59 publications and received 7959 citations. Senior Faculty Research Assistant Andy Ross further noted, “I worked for him as a sea-going chemist until his final retirement somewhere around 2006. He was always friendly, supportive and sharp as a tack when it came to all forms of chemistry. He was a very exacting individual and always strived to achieve the best accuracy and highest precision in all of our work – along with being a leading-edge thinker. He loved to experiment. He was also an international collaborator, inviting scientists from Israel and Oman to do research in our lab. We sailed multiple times together down in the Antarctic mostly on board R/V Nathaniel B. Palmer in the Ross Sea. He loved the adventure and was always happy to share stories from his younger days. He took his role as King Neptune seriously during our southern ocean crossing ceremonies. He was perfect for the part.” See Louis Irwin Gordon to read more. 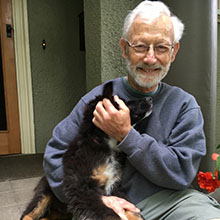 Shaul Levi
1942-2021
Professor Emeritus Shaul Levi with the College of Earth, Ocean and Atmospheric Sciences died December 6, shortly after his diagnosis of leukemia. He was attended by his wife Catherine and his son Boaz when he passed. Levi was born in Haifa, Israel. His parents were refugees from Nazi Germany, fleeing just before deportations to the concentrations camps began. Levi moved with his family to the United States when he was 15 years old. Levi graduated from high school in 1960 and earned a soccer scholarship to University of San Francisco where he played for the USF Dons. He graduated with a degree in physics from USF then attended UC Davis. Levi earned a Ph.D. in geophysics from the University of Washington and did post-doctoral research at the University of Minnesota. In 1977 Levi was hired as an assistant professor in the then College of Oceanography at Oregon State University. He loved Corvallis and enjoyed working at the university. See Shaul Levi to read more. 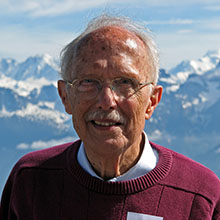 Robert S. Yeats
1931-2021
Robert S. Yeats, Professor Emeritus of Geology, died December 5 at the age of 90. Born in 1931 in Florida, he received a Bachelor’s degree from the University of Florida and Master’s and Ph.D. degrees from the University of Washington. Bob, as he was known to his friends, joined Oregon State University in 1977. He served as chair of the Department of Geology from 1977 to 1985 and retired in 1997. Bob coauthored The Geology of Earthquakes, the only textbook to address earthquake science from a geological perspective. In the late 1980s, Bob and colleagues organized a workshop to explore the seismic hazard posed by the Cascadia subduction zone, well before the threat to the Pacific Northwest was widely recognized. In 2006, Oregon State established the R.S. Yeats Professorship in Earthquake Geology and Active Tectonics to honor Bob's long career and his many contributions to science and society. See Robert S. Yeats to read more. 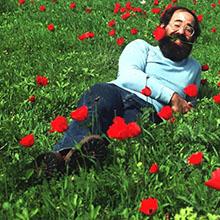 Barry F. Sherr
1944-2021
Professor Emeritus Barry Sherr passed away at the age of 77. Barry was a marine microbiologist in CEOAS from 1990 until his retirement in 2012. Along with Professor Emerita Evelyn (Ev) Sherr, his wife and closest scientific collaborator, Barry led a productive career studying microbial organisms and their contributions to elemental cycles and food webs—both in Oregon’s coastal upwelling system and the Arctic Ocean. During his time at Oregon State, he and Ev participated in several multi-national Arctic projects, including the Arctic Ocean Section (AOS) and the Surface Heat Budget of the Arctic Ocean (SHEBA). He worked closely with Distinguished Professor Emerita Patricia (Pat) Wheeler, as well as many accomplished scientists at Woods Hole Oceanographic Institution, University of Rhode Island, and other institutions. See Barry Fred Sherr to read more. 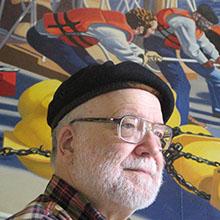 Robert L. “Bob” Smith, physical oceanographer and professor emeritus, passed away at the age of 84. Bob was part of CEOAS since nearly its beginning, as a graduate student and early investigator of coastal upwelling. He, Chris Mooers, Curt Collins and Dale Pillsbury were pioneers in using moored current measurements to study currents over the continental shelf. Bob spent nearly his entire career at OSU, aside from a NATO postdoc at NIO in England and a two-year stint at the Office of Naval Research in Washington D.C. from 1969 to 1971. He was a leader in the NSF-funded Coastal Upwelling Experiment (CUE) in 1972-1973 off Oregon, and follow-on experiments off Northwest Africa and Peru. See Robert L. Smith to read more. 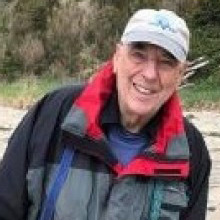 James Robert Pease was born in Halifax, Vermont to Jessie (née Dean) and Merle Pease, and was the middle of three children. He graduated from Turners Falls High School, where he was class vice president, president of the French Club, and played football, receiving injuries resulting in his famously crooked nose. James received his BA in History from the University of Massachusetts at Amherst (UMass) in 1960, and taught high school English in Granby, Massachusetts and Brattleboro, Vermont. He later returned to UMass and obtained an M.S. and then a Ph.D. in Resource Planning in 1970 and 1972, respectively. James and his family moved to Corvallis Oregon in 1972, as James had received a faculty position at Oregon State University. James spent 25 years at OSU and achieved the rank of tenured professor in the Geosciences Department, where he taught graduate-level courses in land use planning and natural resource management, with a particular focus on land use planning for agricultural and timber lands, and environmental impact analytical methodology. See James Pease to read more. 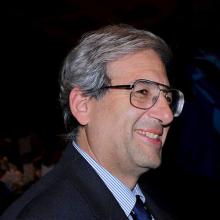 On August 5, 2020, the Earth Sciences community lost a passionate advocate for satellite remote sensing of the Earth. Michael Freilich died peacefully in his home in Kensington, Maryland, at the age of 66 after a gallant nine-month battle with pancreatic cancer. He had retired in February 2019, just nine months before his cancer diagnosis, after a distinguished career working more than 35 years for the National Aeronautics and Space Administration (NASA) and in academia at the College of Earth, Ocean, and Atmospheric Sciences at Oregon State. He will be remembered for his intellect, scientific accomplishments, and deep strategic thinking, as well as for his integrity, wit, and generosity of spirit. See Michael H. Freilich Memorial Fund to read more. 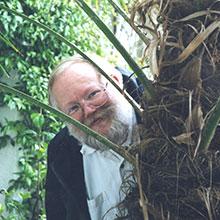 John Stanley passed away quietly after a four-month battle with pancreatic cancer. He was surrounded by family, compassionate help and a fitting assortment of computers, radios and electronic gizmos. John was a long-term core member of CEOAS since 1991, serving as an assistant administrator in computer and camera technology. He was instrumental in developing a suite of optical measurement approaches to observe nearshore phenomena. In addition to his career, John served in the Civil Air Patrol, achieving the positions of Major and Lieutenant Colonel. In ARES, Amateur Radio Emergency Services in Oregon, John helped facilitate communications in search and rescue training and missions. He has assisted in training for Oregon’s local ARRL, American Radio Relay League. John has also served Northwest Hills Community Church in sound and video ministry. See John Stanley to read more. 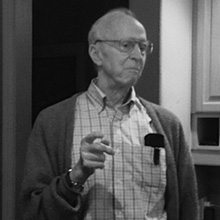 James W. Deardorff
1928-2014
Jim was the middle of three children born in Seattle to Ralph and Mary Deardorff. He was raised in Portland and graduated from Lincoln High School, after which he completed his freshman year at Reed College and then transferred to Stanford to participate in an NROTC scholarship. He spent his fourth year at UCLA studying all the prerequisites for graduate meteorology. After serving 3 years in the Navy he studied graduate meteorology courses at University of Washington, where he received his Ph.D. in 1959. After working on an air-sea interaction project at U of W, he obtained a job at the newly established National Center for Atmospheric Research (NCAR) in Boulder, CO in 1962. In 1978 he left NCAR with his family for the Department of Atmospheric Sciences at Oregon State University, where he was a research professor until taking early retirement in 1986. See James Warner Deardorff to read more.