The National Science Foundation sponsored Ocean Observatories Initiative (OOI) constructed and is now operating a network of science-driven sensor systems to measure the physical, chemical, geological, and biological variables in the ocean and seafloor. Greater knowledge of these variables is vital for improved detection and forecasting of environmental changes and their effects on biodiversity, coastal ecosystems, and climate.

The Pacific Northwest coastal component of OOI, called the Endurance Array, places a series of long-term moorings off the coast of Oregon and Washington. Oregon State University operates and maintains the Endurance Array's surface moorings, profilers with surface expressions, and gliders. The University of Washington maintains the parts of the Endurance Array cabled along the seabed to shore. The network of undersea gliders that OSU programs to survey the near-shore waters. Gliders transmit data from each of their instruments onshore several times a day. OOI's CyberInfrastructure makes data from all Endurance Array instruments available online in near real-time.

The construction of the infrastructure began September 1, 2009 and lasted six years. Then OOI was operated for an additional three years by OSU and the other institutions that constructed it under the same award. Bob Collier was the initial principal investigator of the OSU-OOI group with Jack Barth and Edward Dever as co-PIs. On October 1, 2018, a new consortium that included OSU started a new award to operate OOI for an additional five years. In early 2020 Rutgers University, which was then responsible for the data center, announced they would be leaving the program in September 2021. After a competitive proposal process, OSU was awarded the Cyberinfrastructure contract in September 2020 and the new data center became the system of record ten months later on July 30, 2021. Current operations and maintenance planning is based on a 25-year life span.

The OOI observatories and subsystems include:

Cabled Array: A cabled network of interconnected sites and sensors on the seafloor spanning multiple geological and oceanographic features and processes. The Cabled Array also provides power and bandwidth to the Endurance Array at two locations. It is operated by University of Washington.

Global Arrays: Autonomous moored buoy platforms at two deep water, high-latitude locations (Station Papa and Irminger Sea) are key to capturing large-scale ocean-atmosphere coupling where there has been little or no previous sustained coverage. These are operated by WHOI. Data collection with OOI moorings also continues at the Southern Ocean site OOI had occupied for several years, but this work is no longer funded by OOI. OOI's Global Array in the Argentine Basin was suspended indefinitely in 2018.

CyberInfrastructure (CI): The OOI CI, which is operated by OSU, manages and integrates data collected by the hundreds of instruments deployed across the arrays, linking the marine infrastructure to researchers, students and educators.

OOI In the News 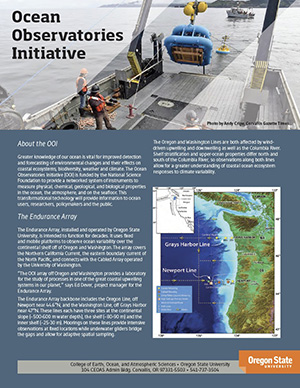