Save water by cutting trees? 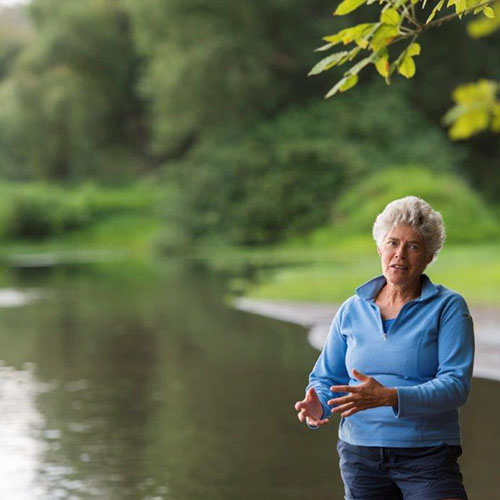 Thirty years ago, Julia Jones had a cartoon of the water cycle hanging in her office. Not the kind you might think of, with rain feeding rivers, trees intercepting rain, and evaporated moisture vaulting into clouds. Her cartoon showed arrows moving in a circle, connecting the words “Floods-Concern-Drought-Apathy.”

Jones, a professor of geography in the College of Earth, Ocean, and Atmospheric Sciences at Oregon State, says the cartoon couldn’t be timelier, in spite of its age.

“A couple of decades ago, the big concerns in our region related to hydrology had to do with floods, extreme high flows and the role of dams and forestry in managing those flows,” she says.

But now the dialog has shifted to water scarcity, which, as predicted by the cartoon, has raised far fewer eyebrows here in the Pacific Northwest.

Jones is seeking to change that. Her research includes a particular facet of water scarcity, namely the near invisible ways that trees and water intersect. Her diverse work in this area includes long-term experiments that ask whether natural forests or managed stands use less water.

In 2008, Jones and colleagues produced a National Academy of Sciences report that outlined the hydrological effects of a changing forest landscape. The report was prompted by a question that some U.S. government agencies were asking: Can you save water by cutting trees? In the face of drought, the question seemed innocent enough. Forests use a lot of water, so thinning thirsty trees could increase water yield.

The NAS report revealed some key points. Among them was that reduced forest cover may increase water yield, but increases are generally short-lived and occur during seasons of water excess rather than scarcity. The report also called for additional research to understand how climate change, forest management and water quantity and quality may interact over longer time scales.

Fortunately, Jones has been on the front lines of conducting long-term ecological studies at the H.J. Andrews Experimental Forest in Oregon. She and graduate student Timothy Perry recently published a paper that examined 60 years of watershed data at both the Andrews and South Umpqua Experimental Forest, comparing water use between old-growth forests and forest plantations. They discovered that although initially there was a short-lived increase in streamflow after old forests were logged, plantation forests beyond the age of 20 years used twice as much summertime water as old-growth forests.

“That implies that in the Pacific Northwest region, as we have converted older forests into intensively managed plantations, we are having an effect on a public good — water in the summertime — and we are still in the apathy part of the water cycle, because there isn’t awareness of this effect,” Jones says.

Exactly why old-growth forests use less water during the hot, dry summers typical of our region is both fascinating and complicated. It may in part have to do with epiphyte communities — the ferns and mosses growing on the trees. These communities can take centuries to develop.

“The old-growth associated epiphytes have a greater capacity to store water and release it more slowly,” Jones says.

An even closer view reveals the little-understood role of endophytic fungi — fungi that live symbiotically with trees, growing inside coniferous needles. Scientists once thought that coniferous trees cannot absorb water through their needles. But these fungi may have the ability to draw in water.

Another mechanism for water retention in the forest is the microclimate created by the canopy itself, which Jones and colleagues investigated in the Andrews. On warm days, sun hits the canopy and heats the air. The air rises, water evaporates and the wind moves the air up the valley and upslope. But, as soon as part of the landscape becomes shaded, the air cools and descends.

“The Andrews is never less than 20% in shade. Even on the hottest days in 2017 when temperatures reached 106 degrees, in the early afternoon, the tall, old-growth trees and steep slopes cast shadows that cooled the air, which flowed downward and carried water vapor back down the valley. There, the water vapor condensed on the tree tops during the night. These processes of cold air drainage are accentuated by the steep topography and the presence of tall trees,” Jones explains.

With growing international recognition of the connections among forests, water and people, Jones is hoping that the needle is moving from “apathy” about drought to “concern.” Her long-term research at the H.J. Andrews is central to raising awareness on the unimagined ways that trees and water intersect.

“After 40 years of funding from NSF, one of the most important lessons of long-term ecological research is the ecology of surprise,” she says. “A colleague of mine describes two different kinds of surprises. One is when a finding challenges a theory. The other is when you discover something that you never could have imagined, and you experience amazement and wonder. At the Andrews, we have a lot of the second kind of surprise. We never could have imagined that a system worked this way, until we started looking at it for a long, long time.”