South Georgia Island is a windswept, remote, rocky island in the middle of the Southern Ocean, about equidistant (1,500 km) from the Falkland Islands and the tip of the Antarctic Peninsula. Seven South Georgia Islands could fit inside the state of Oregon. It is so remote that its government is not located on the island, but instead in offices in the Falkland Islands. Almost every description of the island includes the word “inhospitable.”

In some sense, though, “inhospitable” is a strange word to use to describe South Georgia. It’s true that the human population of the island is tiny: Only a few scientists are there at any given time to staff a research station. But the island is far from uninhabited. It is home to a staggering 1,400 species, more biodiverse, scientists think, than the famed Galapagos Islands. More than 90 percent of the world’s fur seals live here, and half of the world’s elephant seals. It is home to globally important populations of marine birds, including vast penguin colonies. Endemic species abound, including the South Georgia icefish, the South Georgia pipit (a smallish bird) and the South Georgian plunderfish.

Many of the island’s flora and fauna are hanging on at the edge of their geographic distribution, and global climate change is a serious threat. Even small increases in temperature can mean extirpation for some species and in such a haven of the planet’s biodiversity, losses here can be globally important.

Conservation of this special place and the species that live there must begin with knowing what is there, and what is changing. The first order of business, as with many conservation projects, is mapping.

Michael Harte, of Oregon State’s College of Earth, Ocean, and Atmospheric Sciences, is leading a contingent of Oregon State scientists, part of a global team, in cataloguing and mapping the coastal habitats of South Georgia Island. Funded by the Darwin Initiative of the UK government, other project partners include the South Atlantic Environmental Research Institute, the Falkland Islands government and the Government of South Georgia and South Sandwich Islands. The project, which is mapping the Falkland Islands as well, is the first such effort in two decades and the first ever using cutting-edge satellite and drone data. The team will identify habitats and map the location of everything from ice cover to fellfields to kelp forests.

Why map the island in such detail? After all, no one will ever ask Siri to help them navigate to the nearest South Georgia Island Starbucks. Part of the answer is its rich biodiversity. In addition to penguins and seabirds, “there’s an upwelling system there, driven by the Antarctic Convergence, which makes the area really productive,” Harte explains. “And the island is in the heart of the commercially valuable yet ecologically vulnerable Antarctic toothfish and krill fisheries.” Threats to the island abound, as well. Invasive rats, mice and reindeer, which wreaked havoc with endemic species, have all been eradicated in recent years, and identifying and mapping habitats can help evaluate whether sensitive coastal ecosystems, long impacted by these invaders, are rebounding. Other impacts include climate change and cruise ship tourism.

In an era when remote sensing techniques can visualize a single feather on a single penguin’s back, one surprising goal of this project is to purposely use less sophisticated technology for the first maps. The first-pass mapping the team undertook used free medium-resolution data collected by NASA’s Landsat and the European Space Agency’s Sentinel satellites. The Landsat program, the longest-running Earth-imaging satellite program, collects data at 30 m resolution, meaning that one pixel in an image represents a 30m-by-30m square on the ground. Sentinel-2’s imagery is 10 m resolution. (For comparison, the highest-resolution satellite data currently available has a resolution of 0.41 m.)

But this high-resolution data is expensive, while Landsat data is free. Harte and colleagues are trying to demonstrate that remote, under-resourced and technology-deficient locales can still undertake critical mapping projects with only the free data. Low-tech approaches also have the advantage of being more easily adopted by the community, thus sustaining the life of the mapping project and increasing the likelihood that locals will continue the work into the future.

Harte’s doctoral student, Bran Black, carried out much of the image processing and mapping work. In addition to demonstrating the use of freely available data in creating maps, she is also working on a step-by-step handbook that will walk users through the data processing protocols she used to turn the satellite and drone data into usable maps. Most of those analysis tools were created using open-source software meaning they can be freely used by other organizations interested in similar work.

After mapping much of South Georgia Island and the Falkland Islands using the medium-resolution data, the team switched to high-resolution satellite data and aerial drones to re-map certain areas in more detail. But which areas? To identify which locations or habitats were in greatest need of finer-resolution data and how best to use limited financial and personnel resources, the team engaged the people most familiar with the area and its needs—residents, farmers, conservationists and government officials.

Black conducted a series of public workshops to ask these South Georgia and Falklands stakeholders about their mapping needs. They weighed in on the utility of the maps she had already created and asked for more specific studies. Tourism managers wanted to know the impacts on the landscape in highly trafficked areas. Government natural resource administrators wanted to know whether native plants were rebounding after having been chewed on for so long by the now-eradicated reindeer.

Using this feedback, the team went back to work, using high-resolution satellite data (provided under a no-cost grant from Maxmar/DigitalGlobe) and drones (which take images with resolutions of centimeters) to re-map certain areas. A series of scientifically accurate and visually stunning baseline maps was created, to which future maps can be compared to sleuth out change of all kinds.

Analysis of these new data sets highlighted another problem, especially with the drone data: “The drone imagery is overwhelming in its detail. You can drown in it,” Black says. “I had to lower the resolution of the data, because, for one thing, my first attempt at processing it broke my computer.” She likens the high-resolution drone data to attempting to walk out to your car in a parking lot and being slowed down by obsessively observing every leaf on every tree along the way.

So essentially the team had to dumb the data down a little bit, in order to make them usable. “It comes down to how much resolution you actually need,” Harte points out. “Scientists generally love to collect more and more data. But we are asking, what's the value of the information we're collecting? How do we change mapping initiatives from being scientific research projects to practical, widely used Earth observation systems that can be used by almost anybody?”

The goal of using cheaper, lower-tech approaches carried over to the underwater mapping component of the project as well. Geologist Chris Goldfinger, of CEOAS, was the lead on the subtidal mapping. He explains that this part of the project used equipment the locals already had on hand: a small, relatively inexpensive side-scan sonar device made for the consumer rather than the scientific market (Goldfinger refers to it as a “semi-toy”) towed by an 18-foot inflatable boat. The subtidal team sometimes supplemented their surveys with imagery provided by the boat’s fish-finder, which was a good way to differentiate between two species of kelp, although the traces on the fish-finder can’t be saved to any kind of electronic file.

Echoing Harte and Black’s descriptions of the project, Goldfinger commented, “Part of the aim of the project was to go to an underdeveloped country and see what you can do with the tools they have there. Everyone has a fish-finder and a small boat with an outboard motor, and the small side-scan sonar we used can be purchased for about five thousand dollars. So these are tools that small countries and organizations can reasonably be expected to come up with.”

The Government of South Georgia and South Sandwich Islands is very excited about the outcomes of the project thus far. In a report on the project, the government praises the project as a valuable first step: “The … Coastal Habitat Mapping Project has provided a valuable snapshot of what South Georgia looks like today and may provide clues to the stresses it is under, but perhaps even more exciting than this glimpse into the South Georgia of today, is the ability to repeat and expand this work over time, so that [the Sough Georgia government] can begin to understand temporal changes and use this knowledge to inform management decisions to better protect South Georgia.”

With a solid baseline map in place for the island, all involved agree that they’d like to return to watch, and map, what happens at South Georgia over time. But if the project is successful, they won’t have to: using some decidedly low-cost approaches, the locals will be able to do the mapping themselves.

Many people’s familiarity with South Georgia begins and ends with the explorer Ernest Shackleton and his ill-fated Southern Ocean expedition of 1914-17. After becoming trapped in the ice in the Weddell Sea and losing his ship Endurance, Shackleton and a few of his men left the rest of the crew behind and made a daring open-boat journey across 700 nautical miles of frigid and angry ocean to the whaling station at South Georgia. His adventure continued: After landing on the opposite side of the island from the whaling station, he and his accompanying crew mountaineered to the other side, along a treacherous route never tried before. The men were successful, and Shackleton was able to send rescue to the remaining Endurance crew, most of whom had survived. Shackleton returned in 1922 to South Georgia at the start of another Antarctic expedition, suffered a heart attack, and died. He was interred on the island, and visitors can visit his grave today. In case you’re not planning a visit to that neck of the woods, the mapping project has produced a satellite image of his gravesite. 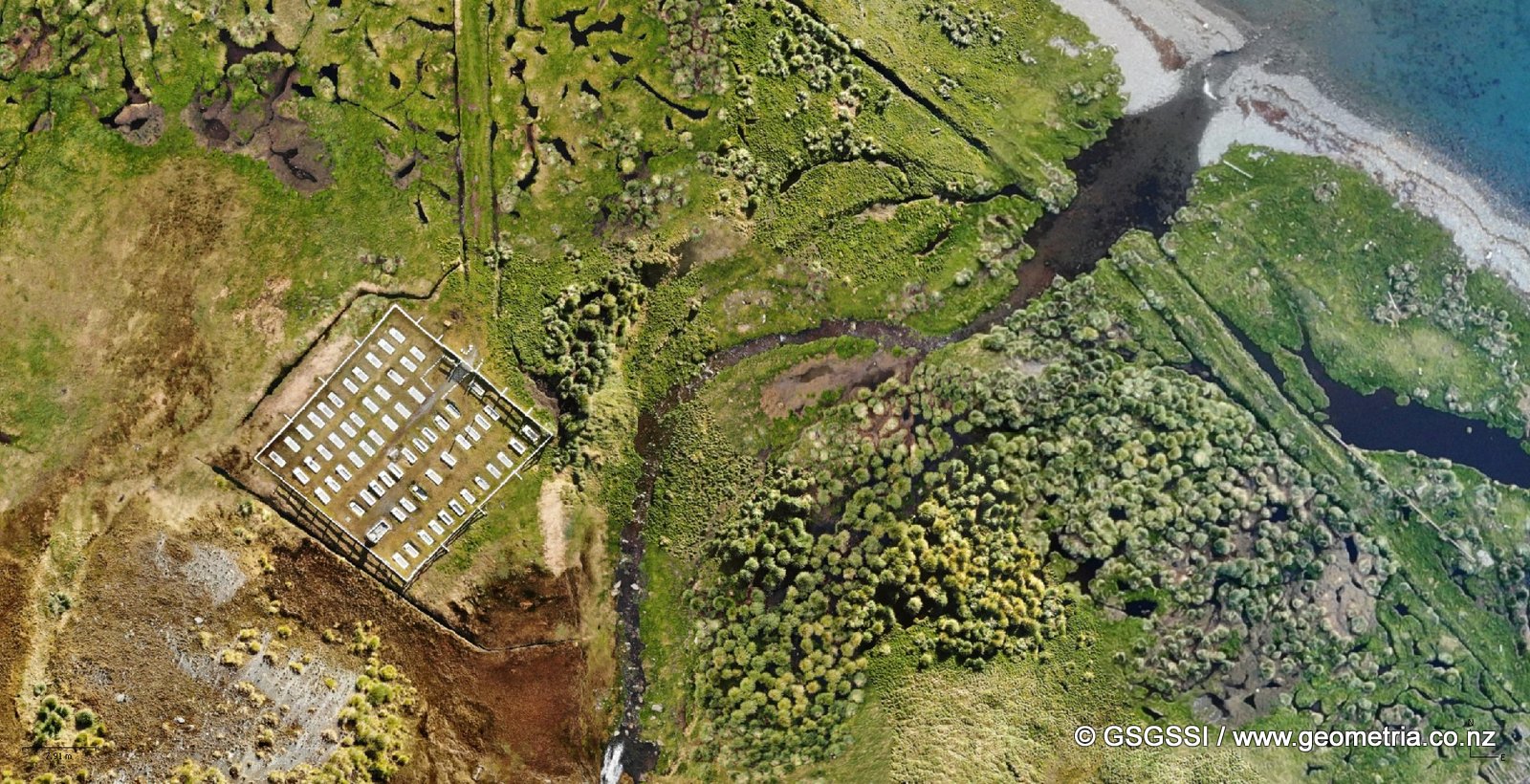 Satellite image of South Georgia Island graveyard. Shackleton’s grave is the one covered in the most shadow. This imagery was collected by Geometria Ltd on behalf of the Government of South Georgia & the South Sandwich Islands, and processed by Neil Golding (SAERI) for the Darwin Initiative (DPLUS065) Coastal Habitat Mapping project. © GSGSSI, 2018