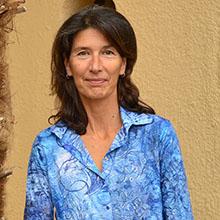 Roberta Marinelli is a Professor in the College of Earth, Ocean, and Atmospheric Sciences at Oregon State University. Currently Marinelli is on leave, serving as the Director of the Office Polar Programs at the National Science Foundation. From September, 2016 until the end of April, 2022, she was Dean of the college.

Previously, Marinelli served as executive director of the Wrigley Institute for Environmental Studies at the University of Southern California, a post she held since 2011. There, she played a leadership role in planning and implementing an expansion of academic and research programs in environmental studies at USC's University Park Campus, and directed the Philip K. Wrigley Marine Science Center on Santa Catalina Island. Marinelli also oversaw the George and Mary Lou Boone Center for Science and Environmental Leadership, a nexus where scientists and policy makers can meet to resolve environmental challenges.

Prior to her arrival at USC, Marinelli was the Director of the Antarctic Organisms and Ecosystems Program in the National Science Foundation's Antarctic Sciences section, where she helped to lead the development of collaborative, interdisciplinary programs across the Foundation, including the International Polar Year, Climate Research Investments, and SEES (Science, Engineering and Education for Sustainability). She was a tenured associate professor on the faculty at the University of Maryland's Center for Environmental Science, and an assistant professor at the Skidaway Institute of Oceanography.

Marinelli received her master's and doctoral degrees in marine science from the University of South Carolina, and her bachelor's degree from Brown University. She is a member of the American Geophysical Union, the Association for the Sciences of Limnology and Oceanography, and The Oceanography Society.

The ecology and biogeochemistry of the seafloor

The interactions between organisms on the seafloor – clams, marine worms, and other fascinating creatures – and the chemical properties of their habitat