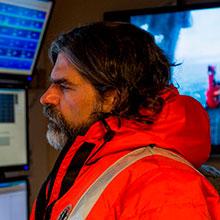 My overall scientific interest is to better understand the cycling of natural organic matter in the earth's surface, mainly in aquatic environments such as oceans, estuaries, rivers, groundwater, and lakes. A key objective of my research is to elucidate the role that organic matter plays on the global biogeochemical cycles of major elements (e.g., carbon, oxygen, nitrogen). Specific areas of my on-going research include:

My group is currently working on investigating the sources, transport and fate of organic matter in coastal environments, including tropical, temperate and Arctic margins. On going field programs include work along the Pacific Northwest Margin of the US, the Bering, Chukchi and Beaufort Seas, and the Gulf of Papua (Papua New Guinea). We are working with collaborators at OSU and other instituitions to understand the fluxes and transformations of organic matter in soils, rivers, estuaries and coastal waters and sediments from these sytems and assess how climatic and oceanographic changes affect their carbon cycle. More information (blogs, photos, videos) of some of our going work can be accessed at these web sites:

I am involved in a variety of professional activities, including serving as editor in scientific journals, leading and participating numerous oceanographic expeditions and being a member of different scientific professional societies.  Below I list some of those experiences and include a short video recorded during the last Oceans Sciences meeting as part of the AGU Narratives Project celebration the centennial of the American Geophysical Union.

My experience as Editor and Editor in Chief includes presentations in a variety of settings on how to publish and review scientific articles. An example of this type of activity and service to the scientific community includes this recent webinar on "Advice on publishing scientific articles - Consejos para publicar articulos cientificos" that we carried out in Spanish for Spanish-speaking authors. The link to this webinar is included below:

The 2020 cruises on RV Oceanus associated with OC 296 - Introduction to Field Oceanography and  OC 496 - Advanced Field Oceanography were cancelled due to the COVID19 pandemic. Check out the video by Emmanuel Goicochea entitled Undergraduates at Sea  as part of his OSU Science Media Fellowship from Oregon State Productions.