W. D. Wilkinson joined the Oregon State University Department of Geology at its inception in 1932 where he taught mineralogy and served as chairman from 1960 until 1968. He initiated and sustained the OSU Geology Summer Field Camp Program for 25 years. "Doc" Wilkinson was not a passive individual. He became a forceful presence in the lives of his students, confronting them with a rough exterior or an understanding heart, as the occasion demanded. His conversations were punctuated occasionally with swear words for emphasis, but his office was always open to students for coffee and discussions of problems both personal and geologic. There are many talented people who would never have become geologists if Doc had not set aside his private ambitions and devoted his efforts to their development. His professional specialty was in guiding "unpromising" and discouraged young people toward highly successful careers and rewarding lives. His skill will be long remembered. 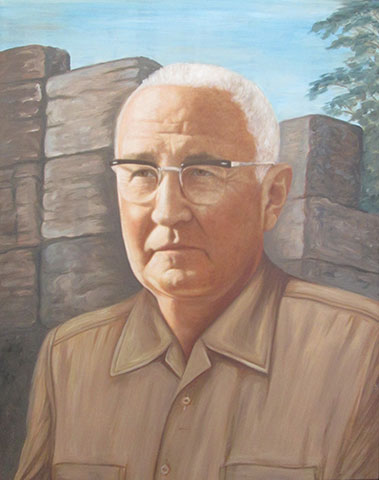 The Oregon State University Geology Summer Field Camp Program has been, at this writing, in operation for eighty years. In 1931, following an attempt by the Oregon legislature to relieve the financial burdens of the great depression, liberal arts were confined to The University of Oregon while sciences and some of the professional schools were moved to O.A.C. in Corvallis. Of course this was an unstable and short-lived condition, but it brought Edwin Hodge, Ira Allison, and Don Wilkinson to the Corvallis campus to replace the School of Mines with a Department of Geology and to establish a curriculum that would include field studies.

Professor Lupher of Washington State University was contracted to teach the first O.S.C. geology summer camp in 1934. Lupher selected Cottonwood Creek on the Mascall Ranch near Picture Gorge as a favorable site for instruction in field geology. Doc Wilkinson assumed responsibility for the summer camp program in 1935 and set up his first camp on Cottonwood creek. He subsequently conducted the summer camp at sites near Paulina until 1939 when the camp was held at an abandoned school house on the Crooked River south of Prineville. The camp was held on the Rogue River in 1940 and 1941. Doc enlisted in the U. S. Army in 1942 and his discharge in 1946 coincided with unprecedented enrollments at O.S.C. stimulated by the post-WW2 G.I. Bill. Those veterans had seen reality beyond their years and were motivated to get on with their lives with the least possible delay. Many were attracted to geology and the field work associated with it. In Wilkinson, they found a mentor who had, while a middle-aged full professor with deferment status, also served in the military. And so they followed him to field camp and pursued MS degrees under his field-based supervision. On the first post-war summer he returned to the Rogue River site but later summer camps were based on the Mascall Ranch.

In 1951 Doc Wilkinson decided to move his camps to the Mitchell area where a greater variety of formational units, rock types, and structural complications was better exposed than at Picture Gorge. Because only 30-minute topographic maps were then available, the first half of each camp session was devoted to production of detailed base maps in which the contours were drawn using plane tables, telescopic alidades, and sighting rods. These early camps were set up at an abandoned farm five miles north of Mitchell where good spring water was available in a grove of shade trees. This site was known as "The Sheep Camp" and was used until the flood of July 13, 1956, which damaged parts of Mitchell and also sent a surge of storm water through the camp. The tents remained standing but sleeping bags, pots and pans, and even the vehicles were soon on their way toward Meyers Canyon.

Several subsequent camps, not subject to flooding, were held in locations made available by local ranch owners. The first of these was in the fork of highways 26 and 207 west of Mitchell where city water was available. In 1963, camp was moved to the Dollarhide property east of Mitchell. A site in the ponderosa forest of the Fitzgerald property on upper Bridge Creek was used from 1971 until 1976. The camp was then transferred to the Clark property near highway 26 which was purchased for the current field station in 1979. O.S.U. President Robert McVicar visited the camp several times and was instrumental in obtaining title to the property. During the next three years, Ed Taylor designed and supervised building construction while Keith Oles generated financial support from many petroleum companies. 1983 saw the completion of our building with kitchen, dinning hall, study room, and restrooms (no more blue lagoons!).

During these years, many faculty were involved in field camp instruction, including Oles, Taylor, Harold Enlows, Robert Lawrence, Alan Niem, Bill Taubeneck, Cy Field, Bob Yeats, John Dilles, Anita Grunder, Sherm Bloomer, and several faculty from Portland State University and Southern Oregon University who participated in joint summer camp programs. More recently, the summer camp instructional activities and improvement of facilities have been supervised with great success by John Dilles, Andrew Meigs, Jeff Lee, and Shan De Silva. Close to one thousand students have received excellent field geology instruction in this 80-year program and it is clear that the Mitchell area has been studied by more geologists than any other locality of comparable size in the state of Oregon.

In 1986 the Oregon State Legislature established a requirement that all summer-term programs in higher education must become self-supporting. Even though summer field camp was required for the undergraduate degree in geology, this removed academic-year financial help and shifted the support of salaries, food, transportation, utility overhead, and instructional materials to student tuition. The program could not have survived and maintained the high quality of field geology instruction that exists today without financial help from Harold Enlows, Wayne Felts, Bill Taubeneck, and many corporations and alumni who have established and contributed to O.S.U. Foundation endowments set up specifically to support the Geology Summer Field Camp Program.