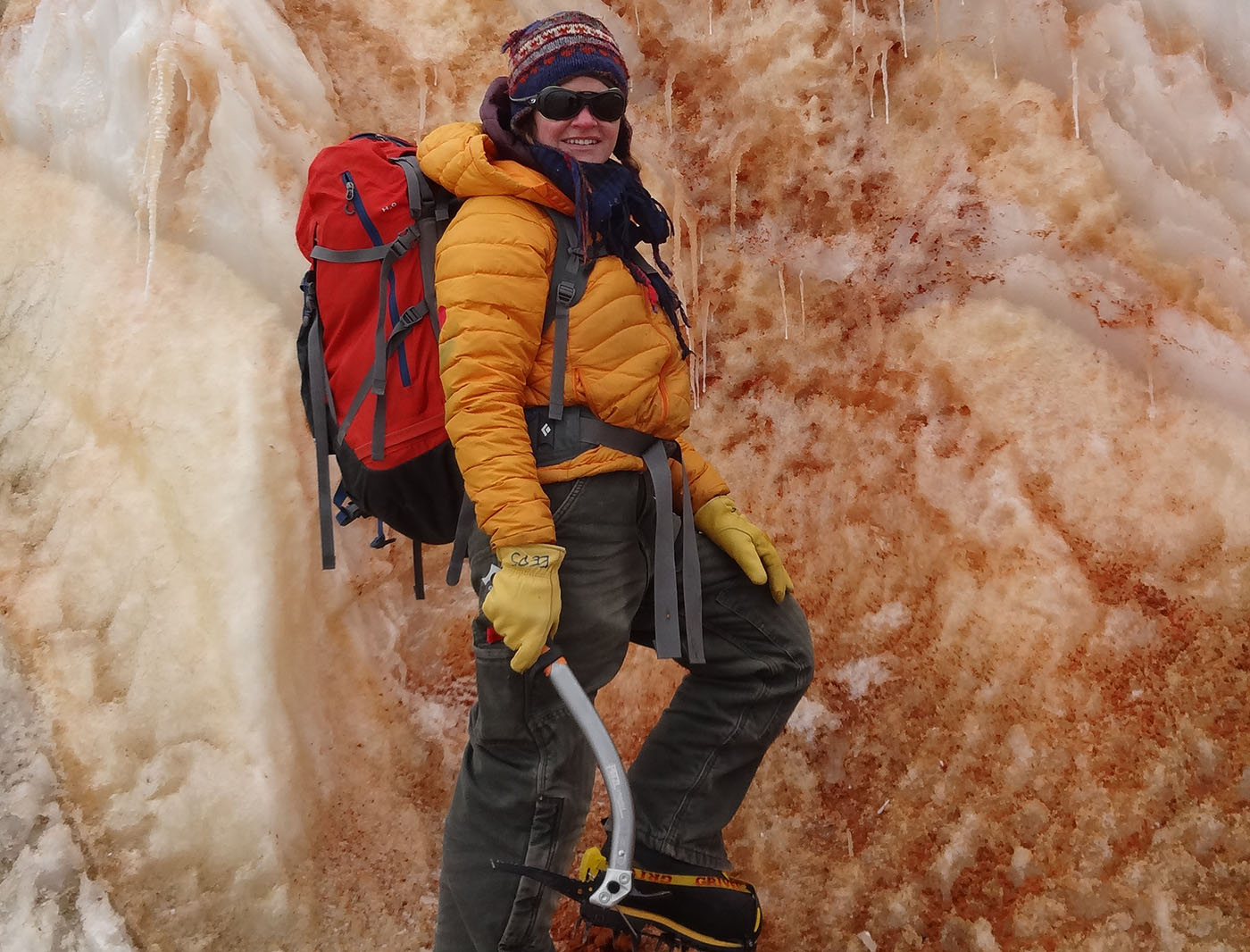 New CEOAS Associate Professor Erin Pettit began her professional life designing and building parts for hybrid electric cars. Now she scales glaciers, examining their dynamic movement in places ranging from the Cascades to the Antarctic. How did she transition from high-tech to high altitudes? What on Earth ties these seemingly disparate fields together?

The answer is mechanical engineering.

Sporting an undergraduate mechanical engineering degree, Pettit was happy to satisfy her long-standing interest in environmental conservation by taking a job building a “green” product. But something wasn’t quite right. Part of the problem was that she was spending too much time indoors.

Luckily, she had some seriously transferable skills. Mechanical engineers use their knowledge of material science, fluid dynamics and heat transfer to figure out what causes things to move, work and break. These principles apply to the natural environment too. So Pettit set out in a new direction, studying glaciers at University of Washington. After recent years on the faculty at the University of Alaska Fairbanks, she arrived at Oregon State in December of 2018.

While some glaciologists focus on the glacier as a sort of “black box,” examining how ice forms and melts and how that balance relates to the climate system, Pettit is more interested in the inner workings of the glacier. “Ice is alive,” Pettit once said in a public talk sponsored by National Geographic. What she meant is that ice moves and changes. It flows, usually slowly, and changes the environment around it even as it is subject to change. She is interested in this movement, the forces that control it, and its consequences.

There is a reason that slow events are referred to as moving at a “glacial” pace: glaciers usually creep rather than sprint, so slowly that their movement is not readily observable without repeat visits to a site, either in person or via imaging technologies. Pettit and her team use both high-tech and low-tech approaches. “We use time-lapse photography – we’ve been doing that forever. We sometimes do something as simple as sticking a stake in the glacier, recording its position with GPS, and then we come back the next year to see if the stake has moved. There’s no reason to go with more complex technology if you can take a measurement with a simple approach,” she explains. She says that her team used to joke that at some sites they studied, it looked like the glacier was undergoing acupuncture.

Satellite technologies have been useful in her work as well. One of her students is examining changes in southeast Alaskan glaciers using data collected by the NASA satellite GRACE, which measures gravity. The more mass a mountain or glacier has, the larger force of gravity it exerts, and so monitoring gravity over time can reveal if a glacier has lost mass.

To look inside the glacier, Pettit is often opportunistic: She uses holes bored deep into the ice by other scientists who take deep cores to examine the composition of the ice and the air bubbles trapped in it. The holes they leave behind offer Pettit a window into the heart of the glacier. She and her students can look at physical deformation of the hole to see if all of the glacier is moving at the same rate, or if glacial layers are moving at different rates.

Recent public awareness of glacier and ice sheet movement is mostly related to the effects of global climate change on polar ice. For example, the media covered a major 2002 Antarctic ice sheet collapse fairly intensely; Pettit has been studying the system’s response to that collapse since then. That collapse appeared to be related to warming in the Antarctic, as have others since. Loss of pieces of Antarctic ice shelves could have dire consequences for sea level rise and other aspects of global change.

Because of this critical role of melting ice sheets in the global climate system, the U.S. National Science Foundation and U.K. Natural Environment Research Council have partnered to undertake an intense study of a place in Antarctica that appears to be a new candidate for ice shelf collapse: the Thwaites Glacier. Their joint International Thwaites Glacier Collaboration has funded nine projects there, and Pettit will serve as lead principal investigator for one. In 2020, she’ll spend three months on the glacier examining how the ocean and atmosphere are affecting glacial thinning.

The movement of glaciers—whether the result of climate change or otherwise—is important to understand, as it impacts landscapes, ecosystems and people. “Glaciers provide water for human communities in many places,” Pettit points out, and adds that the cold streamflow provided by glacial melt in the Pacific Northwest is critical for many salmon populations as well. In addition to meltwater, another product of glacial breakup is icebergs, which can present hazards to ship navigation. Finally, on longer time scales, glaciers create landscapes, both by carving out valleys and simply by melting (the Willamette Valley, for example, was created by floods of glacial meltwater). When they melt and disappear, “glacial rebound” causes areas of continental crust to rise when the great weight of the glacier is lifted.

Pettit’s work at Oregon State is just getting underway, but her track record of research, outreach, and mentoring (see the sidebar about her work with Girls on Ice) is already stellar. She has been a National Geographic Emerging Explorer, a U.S. delegate to the international Scientific Committee on Antarctic Research, a representative for the U.S. Department of State Brazil-U.S. Women in Science Program, and the recipient of a teaching award at University of Alaska. She not only finds more time outdoors now than she did in her electric car days, she is paving the way for girls to follow in her frozen footsteps.

Girls on Ice: Addressing gender equity in field science one glacier at a time

Erin Pettit didn’t climb a glacier until college, but growing up in the Pacific Northwest, she did have a family that played in the great outdoors, providing her an introduction to camping, backpacking and hiking. These formative experiences gave her the skills and confidence she needed to become a field scientist who now organizes and conducts expeditions in some of the most challenging conditions on Earth.

But as a graduate student she knew that not every girl had access to these experiences, which might mean they would never consider a career in something like glaciology.

To help fill that gap, she founded Girls on Ice, a free summer program that takes high school girls on expeditions to scale glaciers and learn outdoor skills and field science in the Cascades, Alaska, Canada and Switzerland. Girls on Ice is now part of the more expansive Inspiring Girls Expeditions, which offers a range of other rugged wilderness experiences: Girls on Rock in Colorado’s Rocky Mountains, Girls on Water in Kachemak Bay, Alaska, and more.

Administration for Inspiring Girls Expeditions has moved to Oregon State with Pettit, who is interested in exploring new programs appropriate to Oregon: Girls in the Forest and Girls on Rivers might fit well, she thinks. The program is funded by a mix of NASA and NSF funding, but private foundations and individuals are a big part of the support to keep the program free and accessible to girls who need it most.

“This program can be life-changing for the students, and also for the instructors,” who are all women, and most are early career scientists and artists, Pettit says. More information about the expeditions, the application process, and ways to get involved can be found on the web site, www.inspiringgirls.org.