Out of this world

How do you test an instrument destined for an icy planetoid far from Earth? Erin Pettit takes it to rather unearthly places.

If you were plucked from your home and placed into a remote glacial landscape, say, Alaska or the Greenland ice sheet, you might think you were on another planet. CEOAS glaciologist Erin Pettit is part of a team that is treating these otherworldly places as exactly that. In an exciting NASA-funded partnership with planetary scientists and engineers from all over the country, Pettit is using glacial landscapes in Alaska and Greenland as “planetary analog sites” to test an instrument that could be deployed in the first mission to land on Europa, the icy moon of Jupiter.

Europa is of particular interest to scientists because underneath its icy shell is a vast ocean containing more water than all of Earth’s oceans combined. The presence of water could mean the presence of life. NASA first plans an orbital spacecraft mission to the moon sometime this decade with a craft dubbed the Europa Clipper, followed by the lander mission later. 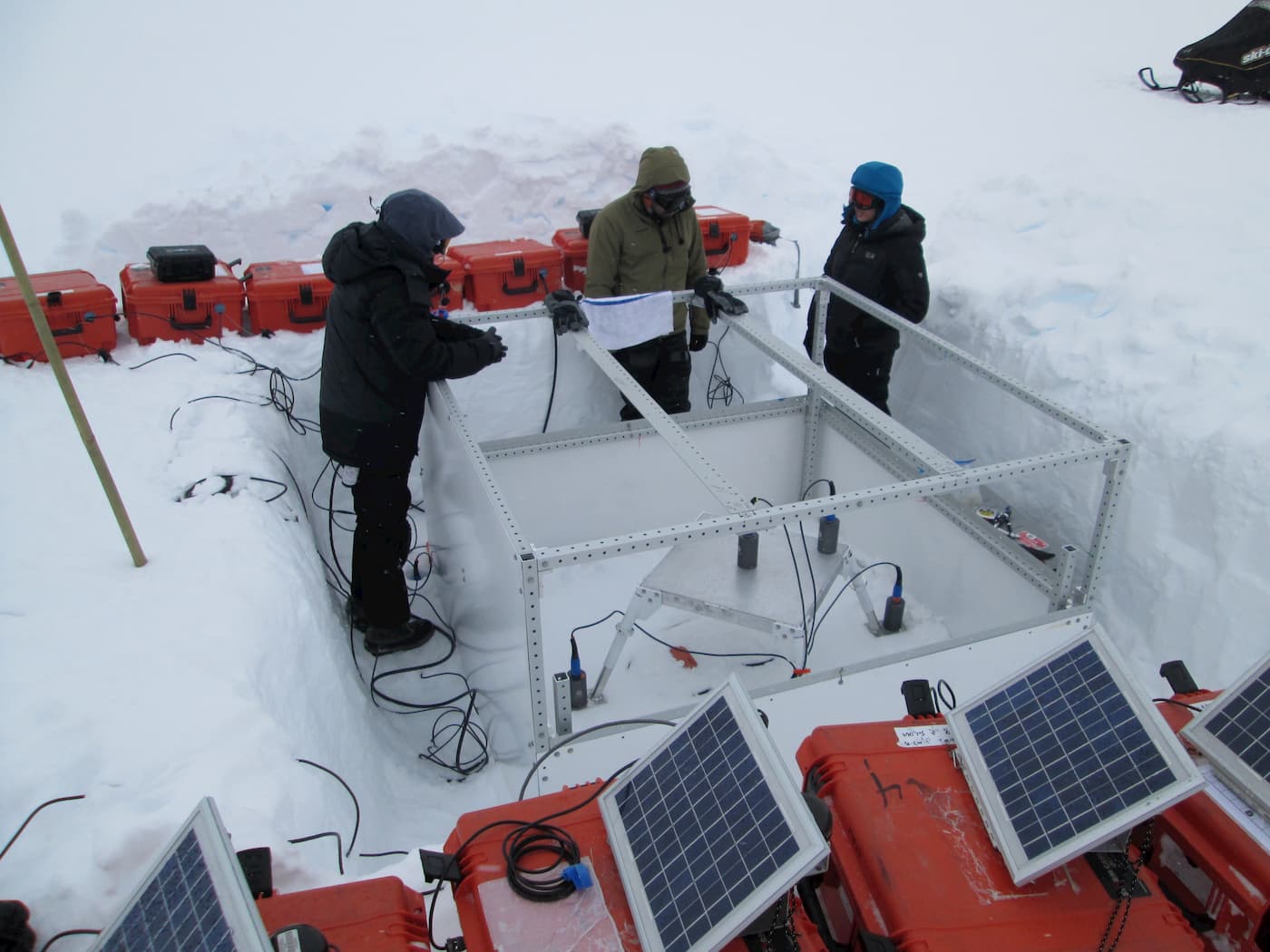 The SIIOS team deploys the instrument in Greenland. Photo by Suz Detweiler

“Studying Europa is in some ways not that different than studying the Earth,” Pettit says. “I like to think of geophysics as examining Christmas presents. The presents are sitting under the tree and you can shake them or sniff them to try to guess what’s inside without opening the box. That’s what we do on planets, including our own – we know what’s going on by observing the planet from the surface, and we have to come up with creative ways to figure out what’s going on inside.”

Pettit and her colleagues believe the best way to determine what’s inside the box called Europa is by using a special seismometer that they developed, called the Seismometer to Investigate Ice and Ocean Structure, or SIIOS. Seismometers are commonly used in geophysical studies of the Earth to measure movements caused by earthquakes and volcanoes. On Europa or other icy planetary bodies, SIIOS could be used to measure “icequakes” as the planet’s surface cracks, and the resulting data can then be used to determine the thickness and structure of Europa’s icy shell, as well as other aspects of the moon’s internal structure.

How on Earth do you start to design and test an instrument meant to be deployed on another planet? It will travel more than 390 million miles through space and arrive on Europa mounted on a lander the size of your kitchen table. Instead of being buried in the ground, as Earth seismometers usually are, this one will need to stay on the lander. On Earth, seismometers need to be carefully adjusted to be parallel or perpendicular to the force of gravity, but this one will have to function wherever and however it lands. It will be exposed to crazily cold temperatures and bombarded by radiation, as Europa has no protective atmosphere. And it will have to dispatch the data it collects back to Earth over a connection speed the equivalent of a dial-up modem.

The scientific team has no idea what to expect in terms of data return, so interpretation will be a challenge as well. Instead of an array of sensors, as is usually deployed on Earth, “We’ll have one seismometer and no idea what the sources will look like,” Pettit says. “It could be hissing from a geyser, it could be big earthquake-like sounds from fracturing ice, or if the ice surface is softer, we might not get much signal at all.”

The SIIOS team started with a rugged seismometer developed for use on Earth by a Texas-based company called Silicon Audio. The SIIOS team has been working with engineers from the company to adapt it for deployment in the far reaches of space. Their sensor uses lasers to take seismic measurements, which helps compensate if the instrument is tilted with respect to the gravitational field, and it is also already fairly resistant to the effects of radiation.

The team first put SIIOS through its paces in 2017 at the Gulkana Glacier in Alaska. They deployed an array of reliable seismometers that had regularly been used in Earth science applications before, and compared the readings from those instruments with readings taken with the Europa-designed instrument. The team simulated geological noise by hitting a metal plate with a sledgehammer and watched to see how the instruments would respond (the instruments also recorded actual earthquakes that took place from Mexico to New Zealand during their field campaign). They experimented with a method of compressing data by turning it into jpeg files – “A picture is worth a thousand words,” as Pettit says. SIIOS rose to the challenge in Alaska, returning data comparable to the regular instruments, but the team knew they needed to push their instrument harder.

The following year the team took SIIOS to a site on the Greenland ice sheet, where the temperature was colder than Alaska and a subglacial lake could better simulate Europa’s ocean under the ice. Again, SIIOS performed admirably, and while the team learned a lot, they encountered an unexpected challenge: snow. It might seem like snow is a given in a glacial landscape, but in recent years climate change has minimized snow at the site. “We estimated we’d have a meter of snow melt at our sites but instead we ended up getting two meters of snowfall. The snow covered our solar panels and reduced our power, but we did get a good dataset,” Pettit said.

The team does not yet know if SIIOS will be chosen for inclusion in the Europa lander. Pettit believes that at least one other team is working on a seismometer concept, and of course NASA has the final say as to which instruments will be included. The team will continue testing and refining while awaiting a decision. Pettit, for one, is happy that SIIOS testing also allows her to continue to explore distant sites on her favorite planet: Earth.