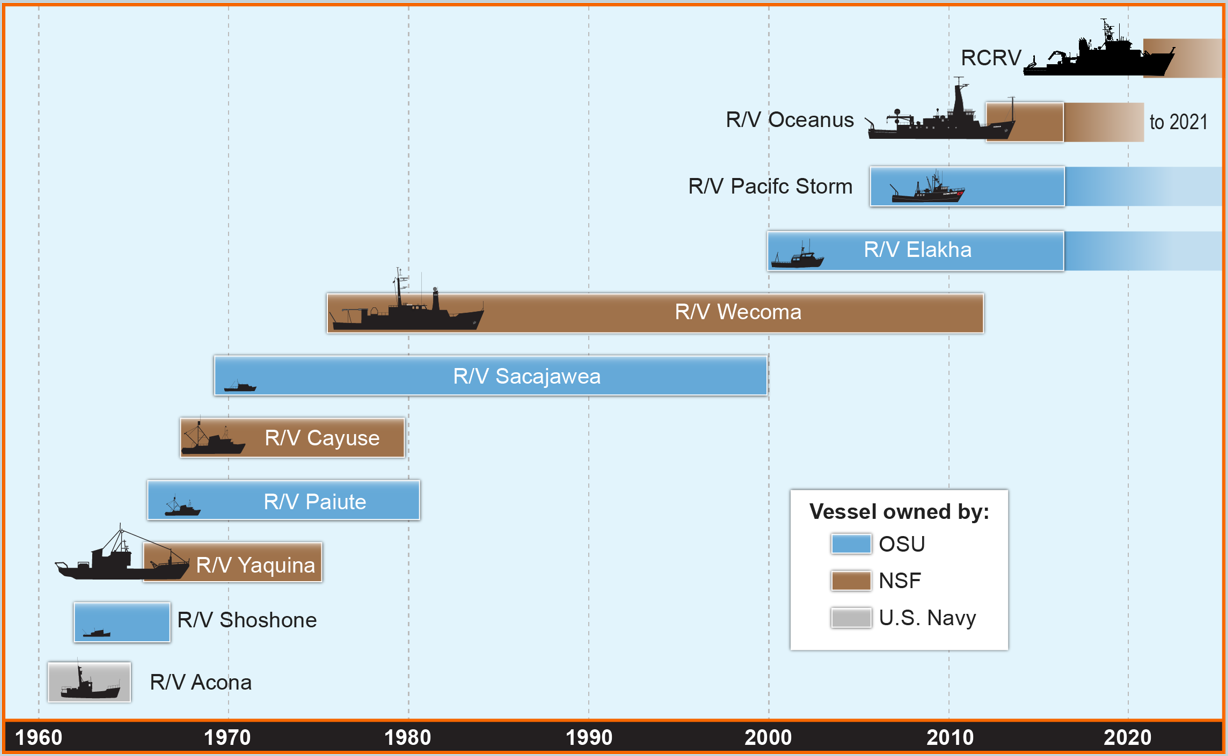 The National Science Foundation has notified Oregon State University that it will be the lead institution on a project to finalize the design and coordinate the construction of as many as three new coastal research vessels to bolster the marine science research capabilities of the United States.

OSU initially will receive nearly $3 million to coordinate the design phase of the project – and if funds are appropriated for all three vessels, the total grant is projected to reach $290 million over 10 years. The final number constructed, and the geographic positioning of these vessels, will be determined by the National Science Foundation based on geographic scientific requirements and availability of funding.

If all three vessels are built, it is likely that one would be positioned on the East Coast, West Coast and Gulf Coast, officials say.

A project team led by Oregon State‘s College of Earth, Ocean, and Atmospheric Sciences will finalize the design for the 175-foot long, technically enhanced Regional Class ships, select a shipyard, oversee construction, and coordinate the system integration, testing, commissioning and acceptance, and transition to operations.

“These will be floating, multi-use laboratories that are flexible and can be adapted for different scientific purposes, yet are more seaworthy and environmentally ’green‘ than previous research vessels,” said Mark Abbott, dean of the OSU College of Earth, Ocean, and Atmospheric Sciences. “These ships will be used to address critical issues related to climate change, ocean circulation, natural hazards, human health, and marine ecosystems.”

OSU vice president for research Rick Spinrad, who previously directed research programs for the U.S. Navy and the National Oceanic and Atmospheric Administration (NOAA), said the new vessels would “revitalize and transform” coastal ocean science in the United States.

“Many of the most pressing issues facing our oceans are in these coastal regions, including acidification, hypoxia, tsunami prediction, declining fisheries, and harmful algal blooms,” Spinrad said. “Because of their flexibility, these new vessels will attract a broad range of users and will become ideal platforms to training early-career scientists and mariners.”

The project had the support of Oregon Gov. John Kitzhaber‘s Office, noted OSU President Ed Ray, who said the university will benefit from the process long before the first ship hits the water in 2019 or 2020.

“What is really unique about this project is that it will involve faculty from engineering and business, who will join their oceanography colleagues on the design and construction elements – and provide unbelievable training opportunities for OSU undergraduate and graduate students interested in project management, marine technology and marine science,” Ray pointed out.

The successful OSU proposal was submitted to the National Science Foundation by Clare Reimers, an oceanography professor, and Demian Bailey, the university‘s marine superintendent. As part of that submission, OSU proposed to be the operator of the first vessel. Additional operating institutions will be determined once the total number of vessels to be built is known.

The university now operates the R/V Oceanus, an older research vessel scheduled for retirement about the time the new research vessels will become available.

“The National Science Foundation hasn‘t authorized a multi-ship project since the 1970s,” Bailey said, “and these are likely the only ships scheduled by NSF to be built during the next decade – so this is a big deal. The endurance and size of the new ships will be similar to that of Oceanus and (former OSU vessel) Wecoma but they will be much more efficient and have far greater scientific capacity and flexibility.”

Bailey said the new vessels will have advanced dynamic positioning that will help them stay in place in the rugged Pacific Ocean. That is a benefit for launching and retrieving gliders and other autonomous or remotely operated vehicles, conducting precise seafloor mapping, and retrieving moorings and other instrumentation. They also will be much quieter, which will help researchers who use acoustics to study everything from endangered whales to undersea earthquakes and volcanoes.

Reimers said the first phase of the 10-year project will begin in early 2013 with the finalization of the vessel design. A concept design is already in place and the OSU project team will partner with two regional firms – The Glosten Associates in Seattle, Wash., and Science Applications International Corporation in Oregon City – to meet naval architecture, marine design and systems engineering requirements.

“These new vessels will allow scientists at sea to conduct state-of-the-art scientific research from the atmosphere above into the seafloor below our coastal oceans,” Reimers said. “Broader impacts will also be possible because these ships will be equipped with modern telecommunications technologies and sensors to be able to transmit a rich variety of observations to scientists, educators and the public ashore.”

“These research ships will keep the United States in the forefront of coastal ocean science,” Wyden said. “The selection of Oregon State University to design these vessels represents an important investment in our nation‘s research infrastructure and adds to the state‘s already-growing reputation as a center for marine research and the place that will train the next generation of ocean scientists.”

Fellow Senator Jeff Merkley (D-Ore.) described the announcement as “great news for both Oregon State University and the state of Oregon.”

“Oregon State is on the cutting edge for marine research and it is only fitting that they have received the honor of designing these new research ships,” Merkley said. “I am excited that we will be developing top-notch research into the health of our oceans and the effects of climate change through this targeted investment right here in Oregon.”