Biology and literature alike are riddled with references to size, often prizing the largest and adoring the smallest. Think, “Bigger is better,” “Small but mighty,” or “That’s one small step for man, one giant leap for mankind.” But rarely is there mention of another scale: the modest medium.

To be fair, it’s hard to admire something for its medium-ness, its quality of being in between. But, a recent study led by Oregon State oceanographer Laurie Juranek stands as a scientific ode to mid-sized organisms, in this case phytoplankton. These unicellular oceanic plants soak up atmospheric carbon dioxide, produce oxygen and form the basis of the marine food web. The middle-sized phytoplankton in particular — called nanoplankton — may play a bigger role in ocean productivity than previously thought. But like an oft-overlooked middle child, nanoplankton have historically been unaccounted for in global carbon cycle models, limiting our ability to understand and predict future ocean health.

“These medium-sized cells are overlooked,” says Juranek, an associate professor in the College of Earth, Ocean, and Atmospheric Sciences who studies how ocean ecosystems are responding to environmental change. “They are not like the small and large guys, which are typically the only ones parameterized in our models. So, our models might be missing the Goldilocks optimum and getting spatial patterns of productivity and biological carbon uptake wrong at times." 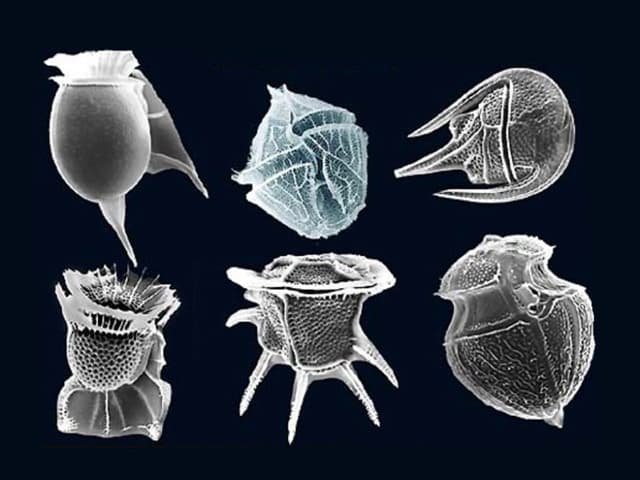 Microscopic image of several types of dinoflagellates. Some dinoflagellates are middle sized, or nanoplankton, which may play a bigger role in ocean productivity than previously thought. Credit: fickleandfreckled,CC BY 2.0

Juranek never set out to study nanoplankton. They first caught her eye as a graduate student while on a cruise in a highly productive region of the North Pacific called the transition zone chlorophyll front. First described nearly 20 years ago, the front is a dynamic ocean feature characterized by swirling blooms of phytoplankton that can be seen from space. During the cruise, Juranek and her colleagues discovered unexpected pulses of productivity. “We had just a few data points that suggested a peak of productivity,” she says.

These pulses could not be explained using prevailing paradigms, which assume that the most productive ocean ecosystems are dominated by the biggest plankton (microplankton), and the least productive by the smallest (picoplankton). Juranek’s measurements should have indicated a high biomass of large phytoplankton, but they didn’t.

Could this big-small binary be missing the happy medium?

Juranek dug into that question during three more recent scientific cruises to the transition zone chlorophyll front, working alongside her “scientific bestie” and former Oregon State researcher, Angel White (now at the University of Hawaiʻi). Their intent was to gather observational data of nanoplankton and understand their unique contribution to carbon cycling.

Juranek and White used a number of high-resolution observational approaches that gave them a more precise glimpse of plankton size than is afforded by standard methods. “To determine phytoplankton size previously, we had to make loose associations between pigments that are characteristic of something bigger, like a diatom, versus something smaller,” Juranek says. “But it was not precise and only hints at ‘who’ is actually there.”

Rather than relying on pigment as a proxy for size, Juranek and White looked directly at phytoplankton using a high-resolution instrument called an imaging flow cytobot. The instrument constantly sips ocean water while aboard a research vessel and takes portraits of particles that pass in front of its camera. Using image recognition, the instrument identifies individual species, essentially amassing a database of plankton mugshots. Instead of the sporadic data points Juranek collected as a graduate student, she now had thousands.

“These new imaging technologies are really advancing our understanding of who’s there. And my piece of the puzzle is, how much production is happening in these systems,” she says.

The types of nanoplankton that Juranek and White sampled were stunningly diverse. They included coccolithophores — armored organisms that look strikingly like a snowball — and dinoflagellates — some plant-like and others called mixotrophs that employ a hybrid survival strategy by acting like both a plant and animal.

With each cruise, Juranek noticed distinct “wiggles” in her data, suggesting a pulse of productivity. When she compared her data to White’s, she found a strong correspondence.

“We found that these areas with high productivity seemed to have high biomass of medium-sized cells,” Juranek says. “The patterns in the biomass and productivity matched remarkably well. We almost didn’t believe it.”

Buoyed by her findings, Juranek plans to go on a fourth cruise in November of 2021, this time heading south toward the equator. Her quest will be to further tease apart the contribution of mid-sized phytoplankton to ocean productivity. Understanding this relationship will be critical to evaluating how climate change may impact the carbon cycle and ocean ecosystems in the future.

But don’t expect biology and literature to suddenly break from their big-small love affair. Juranek may have to be patient before the rest of us catch up to the idea that medium matters.