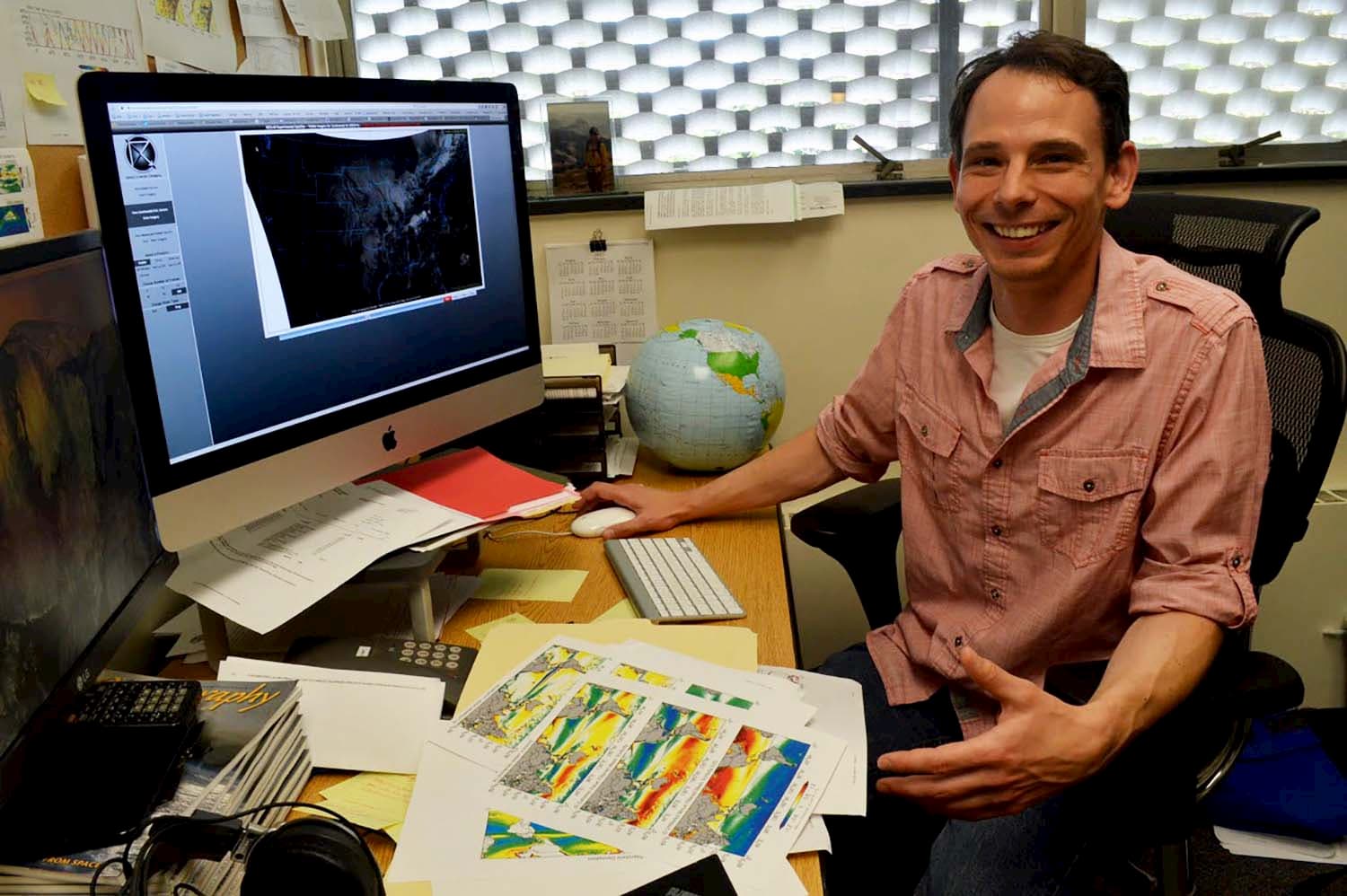 As a child in South Dakota, Larry O'Neill used to watch thunderstorms roil over the Black Hills. His bedroom window faced west, providing a front-row seat to the region's fickle weather. He was so fascinated by it that when it was his turn for T.V., he often picked the weather channel over cartoons.

"In June it could be 80 degrees and have thunderstorms. Two days later, it would get down to 35 or 40 degrees," he says.

Some childhood fascinations fade away. Others, like convective clouds rising over mountains, build into a powerful force. For O'Neill, his curiosity about the weather took the path of the latter, growing from intense interest to professional pursuit.

O'Neill is now an assistant professor with the College of Earth, Ocean, and Atmospheric Sciences at Oregon State, where he takes a detailed scientific look at storms. He is particularly interested in storms within the Gulf Stream, a current of warm water that moderates the climate of the U.S. East Coast and western Europe by transporting tropical heat from the Caribbean to the North Atlantic. The Gulf Stream is a formidable current: each second, it moves a volume of water greater than all the world's rivers combined. Early European voyages to the Americas likely took advantage of this commanding current by hitching a ride back home to make the trip faster.

Also notable is the Gulf Stream's propensity to facilitate the development of storms. The prevailing thought is that the temperature contrast between the current's warm water and the cooler surface air temperature causes winds to converge. The convergence creates upward motion into the atmosphere that eventually leads to clouds and rain.

O'Neill says it's important to understand what causes this upward motion. Otherwise, our weather and climate models could be wrong. Both short- and long-term predictions that help us anticipate everything from ocean conditions, to hazards, to growing seasons could be off the mark.

With a new paper in queue, O'Neill is challenging the prevailing theory that ocean temperature is responsible for upward motion and rain.

"It turns out that this idea isn't necessarily correct," he says. "What causes the upward motion is actually storm systems. The storms cause the air to converge over the Gulf Stream, not just the temperature."

But how does he know that?

O'Neill had a hunch that Gulf Stream storms hadn't been given their proper due. Modelers would average out storms over time, essentially dulling their effect within the Gulf Stream. Picture it like a sound engineer taking all the loud and quiet parts of a rock concert and averaging the sound levels. Concert-goers would hear the entire show played at a sustained volume, without the peaks and valleys of the dramatic guitar riffs or somber ballads.

To understand the true effect of storms within the Gulf Stream, O’Neill applied something called an extreme value filter. He essentially filtered out a few strong storms from the model and looked at the relatively calmer days in between. The idea, which came to him in a dream, allowed him to test whether the relationship between storms and upward motion still held even when these large storms were taken out of the equation. It didn’t.

"I only took out a few observations, and it completely changed the answer. It was easy to code. It didn't take long. And when I saw it, I realized this is pretty clear cut," he says, adding, "I've been barking up this tree a long time. How the ocean influences the weather in the Gulf Stream has long confounded researchers, since commonly accepted ideas do not often translate here. One reason for the Gulf Stream's uniqueness may be the strong storms that have an outsized influence on wind and rain measurements."

O'Neill's work highlights the need for climate and weather models to correctly simulate storm generation over the Gulf Stream. It will help forecasters and scientists make a better distinction between human-caused climate change and natural variability. His extreme value filter could be applied to other climate and weather phenomenon — including the unusually warm mass of water off the West Coast called The Blob. He and his graduate student Briana Phillips are already looking at how early season storms dissipated The Blob's heat during the last few winters, providing greater understanding of how the air and sea interact.