Freeze frame: A student’s snapshot of the MOSAiC expedition

Editor’s note: CEOAS Ph.D. student Daniel Watkins and his advisor, Associate Professor Jenny Hutchings, participated in the epic, multinational MOSAiC expedition this year, the largest study of the Arctic environment ever. Daniel provided this first-person snapshot of his experience with MOSAiC.

We stand with our backs to the hangar as we watch the Russian helicopter crew ready the massive Mi-8 helicopter for takeoff. The horizon is barely discernible, a smudge of gray against gray. Nearly 1,500 lbs of scientific gear has been loaded inside the helicopter; we are waiting only for take-off clearance from the bridge. After half an hour, a crew member motions to us that it is time to board. We shuffle across the ship’s snowy helicopter deck and climb inside, one after another. There is barely enough room for the ten of us to sit along the maroon faux-leather benches lining the helicopter interior.

I’m here in the central Arctic to help with set-up for MOSAiC—the Multidisciplinary drifting Observatory for the Study of the Arctic Climate. MOSAiC is a massive multinational effort, the largest expedition ever mounted to study the Arctic environment. At last count, 20 nations have contributed people, funding, and equipment to the expedition, 16 of which are represented among the nearly two hundred scientists, support staff, and crew with me aboard the research vessel Akademik Fedorov . The centerpiece of the MOSAiC expedition is a heavily instrumented base camp surrounding the German icebreaker Polarstern, which will be frozen into the ice and drift with the current for (we hope) an entire year. The measurements to be taken at the base camp run the gamut from fish and plankton counts to four-times-daily weather balloon launches. Those of us aboard the Fedorov are charged with the installation of the MOSAiC Distributed Network (DN), a system of autonomous instruments that will surround the ship. The goal of the DN is to bridge the gap between the Arctic-wide but low-resolution measurements taken by satellite observations and the single-point, high-resolution measurements taken at the base camp. This will help determine whether the measurements at the base camp are representative of the region, and it will make it possible to observe climatically important sea ice motion that is too large to see from the ship, but too small or too rapid to be visible in satellite imagery. 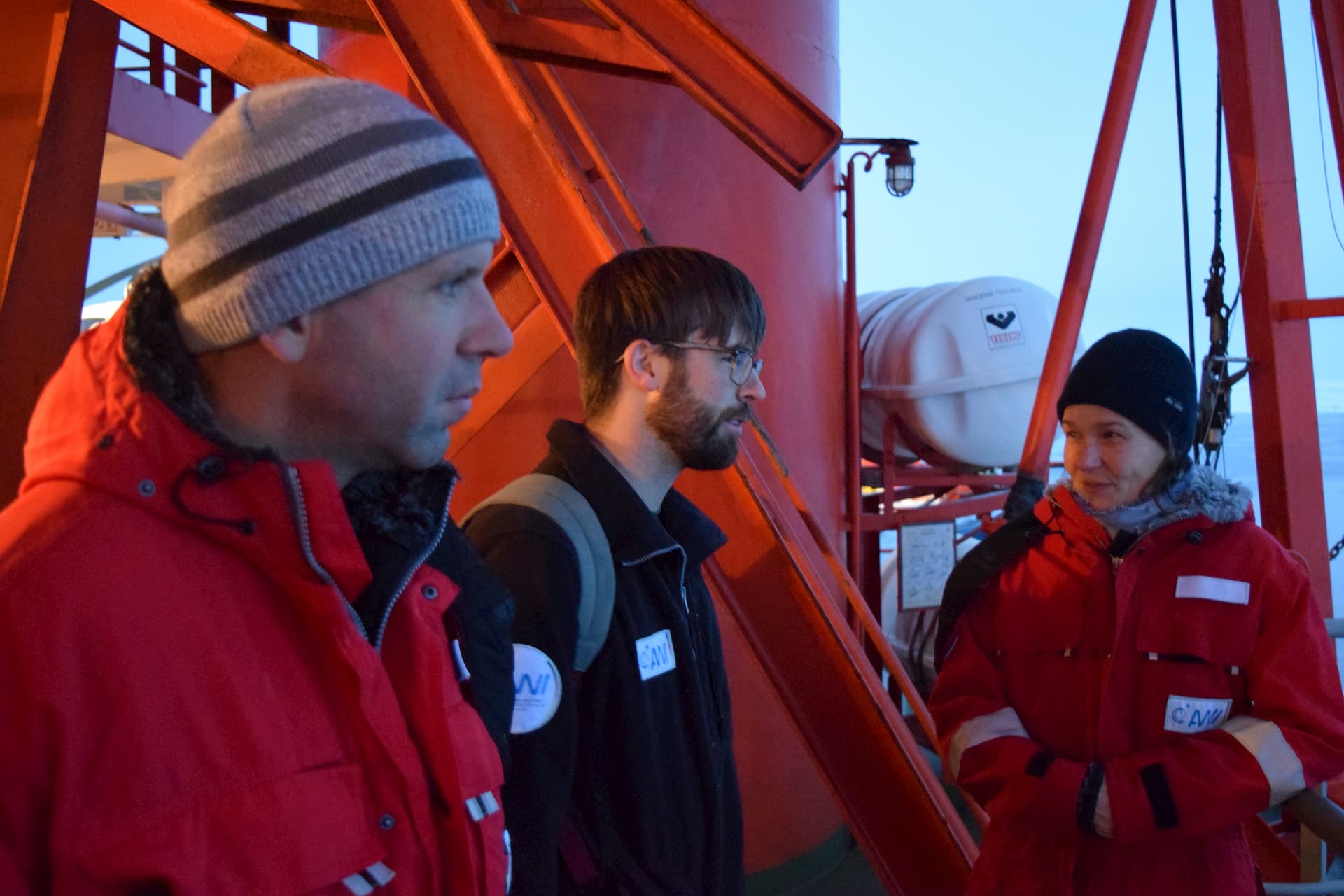 I search my coat pockets and find a pair of foam earplugs. Engine noise can easily reach 100 dB inside, loud enough to cause hearing damage over the course of the three-hour flight. The helicopter vibrates as the blades begin to spin. We sit in anticipation for ten minutes as the rotor accelerates to flight speed. With a nearly imperceptible jump, we are airborne. Craning our necks to see through the small circular windows, we watch as the ship, our home for the past three weeks, shrinks and then disappears into the distance, a speck of red in a sea of white.

Around us, the ocean is entirely ice-covered, but it isn’t just a solid mass of white. Rather, we are surrounded by a mosaic of ice fragments comprising many shades and sizes. In newly opened leads (cracks in the ice), damped waves and patches of slush mark the presence of frazil, the first stage of sea ice growth. Nearby, what looks like matte-black water is a thin layer of nilas, a still-elastic intermediate stage between frazil and brittle, more familiar-looking gray and white ice. I see a few thicker, deformed floes, with strange circular pockmarks that are probably frozen-over melt ponds from the previous summer. I could stare at the ice for hours (and on the ship, I do—well, maybe not hours, since it’s so cold, but for solid fifteen minute chunks at least!).

Early this morning, I met with Vasily Smolyanitsky in the corner of the galley where a lone satellite modem provides limited internet access. Vasily and colleagues at the Arctic and Antarctic Research Institute in St. Petersburg, Russia, have been tracking floes in this location for months, in collaboration with expedition leaders at the Alfred Wegener Institute in Germany and colleagues around the world. Vasily indicates a few near-circular smudges of darker gray on today’s satellite imagery. Satellite radar imagery of sea ice can be ambiguous, but there is a good chance that those smudges represent pieces of year-old ice and thus are promising candidates for placing equipment. I enter the coordinates into my computer. Although the icy seascape appears peaceful and unmoving, it is drifting at about 1 kilometer an hour on average.

This makes it challenging to find a location even with GPS: not only do we need to know the GPS coordinates of the candidate sites, we need to estimate the sea ice drift velocity. The few buoys we placed in the previous three days have already proven their worth. From the last few hourly buoy location reports, we estimate the drift speed and direction and write down a list of waypoints for the pilots.

My advisor, CEOAS Associate Professor Dr. Jennifer Hutchings, has been working with colleagues around the world for the past few years to develop a plan for the DN that will allow simultaneous measurement of sea ice, ocean and atmospheric motion at a variety of spatial scales. My job is to adapt Dr. Hutching’s map to the current ice conditions as best as I can. I’m responsible for the “P-sites,” about 40 small buoys that simply report their position. In concert, these buoy positions allow measurement of the deformation of sea ice as it is alternately torn apart, smashed together, and twisted by ever-changing Arctic winds. The only real difficulty with this step is getting these buoys to the location: They are small, and just need to be placed on a piece of ice slightly bigger than the surrounding ice to minimize the chance of being swallowed in a pressure ridge where slabs of ice collide. More difficult are the M and L sites (M for medium and L for large), which will hold equipment from multiple research groups. Specific requirements for size and ice thickness guide location of the M and L sites; because the ice in the region is unseasonably thin, finding suitable M and L sites has been a real challenge.

I follow our flight path on a GPS-enabled tablet. Nearing the first candidate site, the flight path curves as the pilots circle the floe. Tomasz (one of the AARI ice analysts) leans into the cabin and confers with the pilots. They agree the site looks promising. The mechanic goes to the door, clips his safety harness to a wire dangling from the ceiling, opens the door, and throws an old tire out the door. I’m confused by this at first. I look out the window to watch the helicopter land, and I am surprised at how little time it takes. What I thought were large hummocks and hillocks in the snow are actually tiny ripples. Without a point of reference it’s almost impossible to tell the distance between the helicopter and the snow. The tire is a low-tech and highly effective method of letting the pilots know exactly where the snow surface is. Vasily and Tomasz grab their tools (a hand drill with a long auger and a measuring stick) and climb down the short ladder onto the snow-covered ice. The blades keep spinning, because without testing the ice thickness it is impossible to tell whether it is thick enough to support the full weight of the helicopter.

After measuring the thickness at a few locations surrounding the helicopter, Vasily and Tomasz report back. Although the ice appears uniform from above, the bottom of the ice is lumpy and pockmarked, varying from 4 feet thick to only a foot thick. Although it’s hard to tell from where we are, the pilots estimate that the floe is about half a kilometer across. It’s not big enough for an L site, but it might work for an M site. The analysts confer briefly with the M-site team, and they decide that although the site isn’t perfect, they can make it work. We inform the pilots, who open the back hatch of the helicopter, and we pile out into the snow. Crates pile up on the ice and soon the helicopter is nearly empty. The M-site team huddles down against the rush of wind as the helicopter takes flight. They’ll work at the site for the next three hours, drilling holes in the ice, assembling buoys and long chains of instruments that will dangle 100 meters into the ocean below. 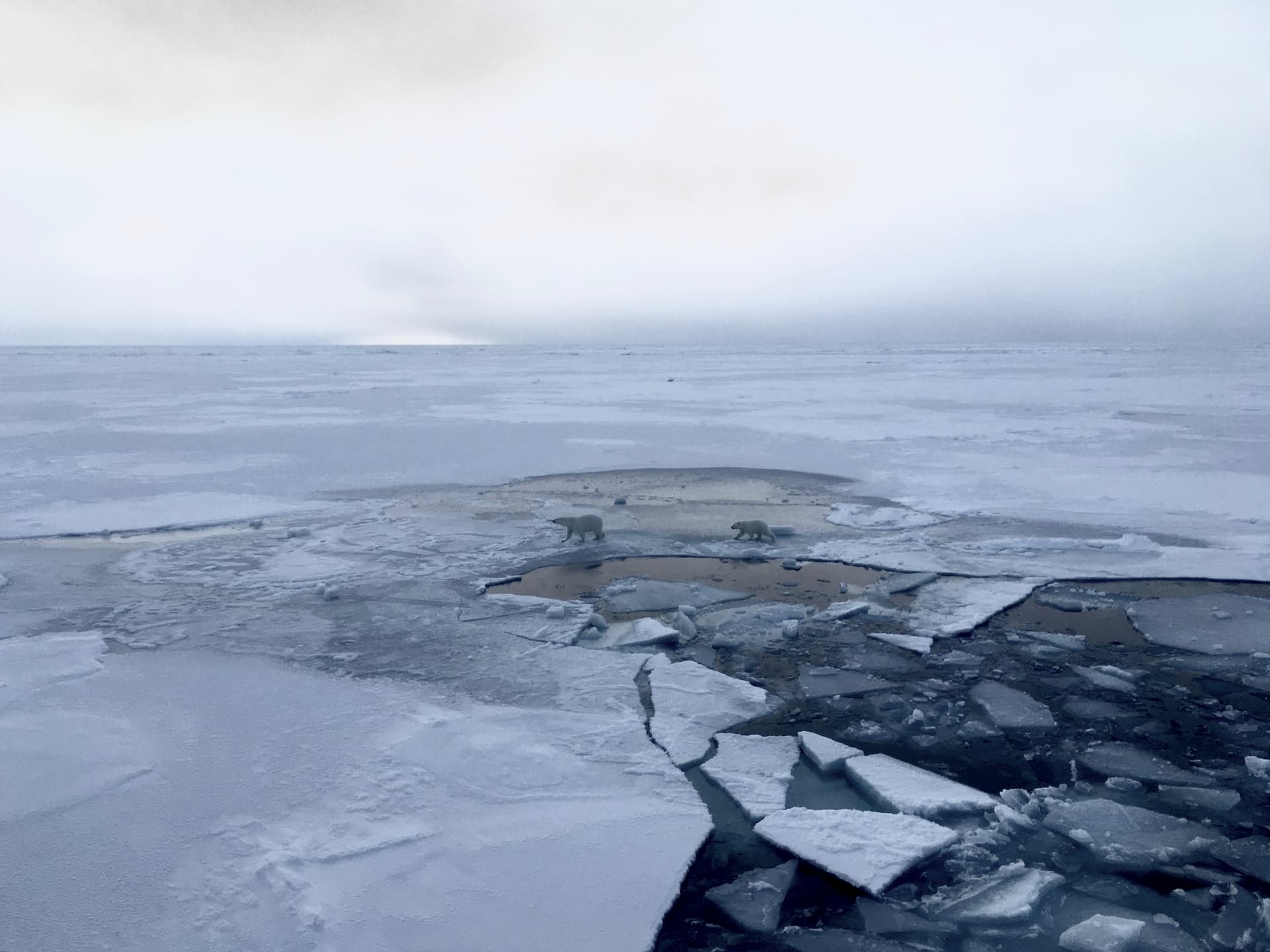 With an M-site chosen, we can now focus on deploying the GPS buoys. Tomasz’ job is done, so he pulls over a duffel bag full of emergency clothing and relaxes into it. Vasily stares out the window and occasionally takes notes. After 15 minutes we arrive at what will be the outer limit of the DN. The mechanic motions Vasily over to the cabin, and then he turns to me to check if we’re in the right place. I give him a thumbs-up and he relays the message. The pilots gently lower the helicopter to the ice. The mechanic places a two-step ladder at the threshold and signals that it’s time for me to place the buoy. I carry the buoy to the door, turn around, and I awkwardly back down the ladder onto the snow-covered ice. Vasily hands me a buoy. I walk a few paces away from the helicopter and place the buoy, double-checking that I’ve activated it.

I look around at the icy seascape. It’s strange, standing here. All that breaks up the flat white surface are soft hummocks, no higher than a few feet tall, where drifting snow has piled against pressure ridges. Underneath me is 4,000 meters of near-freezing seawater; the nearest land is close to 350 miles away. This is the domain of polar bears, seals, char, and white whales; evolution has left me poorly equipped for this harsh environment. I take a photo of the buoy to document the deployment, retrace my steps, then climb back inside the helicopter, where it is warm enough that I need to take off my jacket.