Western North America, Pieter Share loves you despite your faults. In fact, he loves you because of your faults – the ones in the Earth’s surface, caused by tectonic plate movements.

Characterization of these cracks in the Earth’s crust can save lives. Because most large earthquakes originate at major faults, like California’s infamous San Andreas Fault, the more we know about these massive cracks, the closer we get to a complete understanding of earthquake dynamics.

Share, a new CEOAS assistant professor of geophysics, has used a wide range of techniques to study fault zones in South Africa and California, from the surface of the Earth to the depths of industrial mines, and beyond. He started by using the tools of geophysics as a master’s student at the Dublin Institute for Advanced Studies. Although his research group was based in Ireland, he worked on a project closer to his native South Africa: He used electromagnetic techniques to search for past tectonic activity in some of southern Africa’s oldest rocks.

How can measuring electromagnetic signals, accomplished using what are called magnetotelluric methods in geophysics, help reveal characteristics of rocks? “Most rocks don't conduct electricity very well. But some do: As soon as you start adding any type of conductive component, like a metallic compound, graphite or mineral-rich fluids, that rock becomes more conductive,” Share says.

That conductivity data can provide information about the types of rocks underfoot, sometimes deep underfoot, and even tell scientists whether there is or has been tectonic activity at a site.

Share explains: “A fault zone is a region where earthquakes have damaged and broken up the rock. Once the rock is broken, there’s the opportunity for conductive fluids to percolate though the crust from deep down and fill all those little cracks and fractures in the rock.”

So, the high conductivity means presence of interconnected conductive materials, which in turn can mean tectonic activity has allowed those materials to intrude into the rock, Share says. His master’s project involved using these techniques to piece together an underground map and tectonic history of the southern African subcontinent.

After his master’s, Share worked for a mining company in South Africa, conducting geophysical surveys in very deep gold and platinum mines. These massive tunnels into the ground offered Share the opportunity to study some amazing geology. “The mines extended three to four kilometers down into the Earth, so you can imagine that rocks behave very differently at those depth than at the surface,” he says. “Because earthquakes often originate deep in the Earth, we don’t often get the chance to work close to an earthquake’s source.”

Part of Share’s research in the mine used geophysical tools such as a type of ground-penetrating radar to assist with mining exploration and planning. In addition to being of academic interest, he explains that collecting geophysical data in mines is also important for hazard reduction: “When mining operations start removing rock deep in the Earth, the Earth is going to try and close up that gap because it's got all this heavy rock above it. And then you get seismic activity, which needs to be monitored because we don't want the rock to collapse onto people working in the mine.” 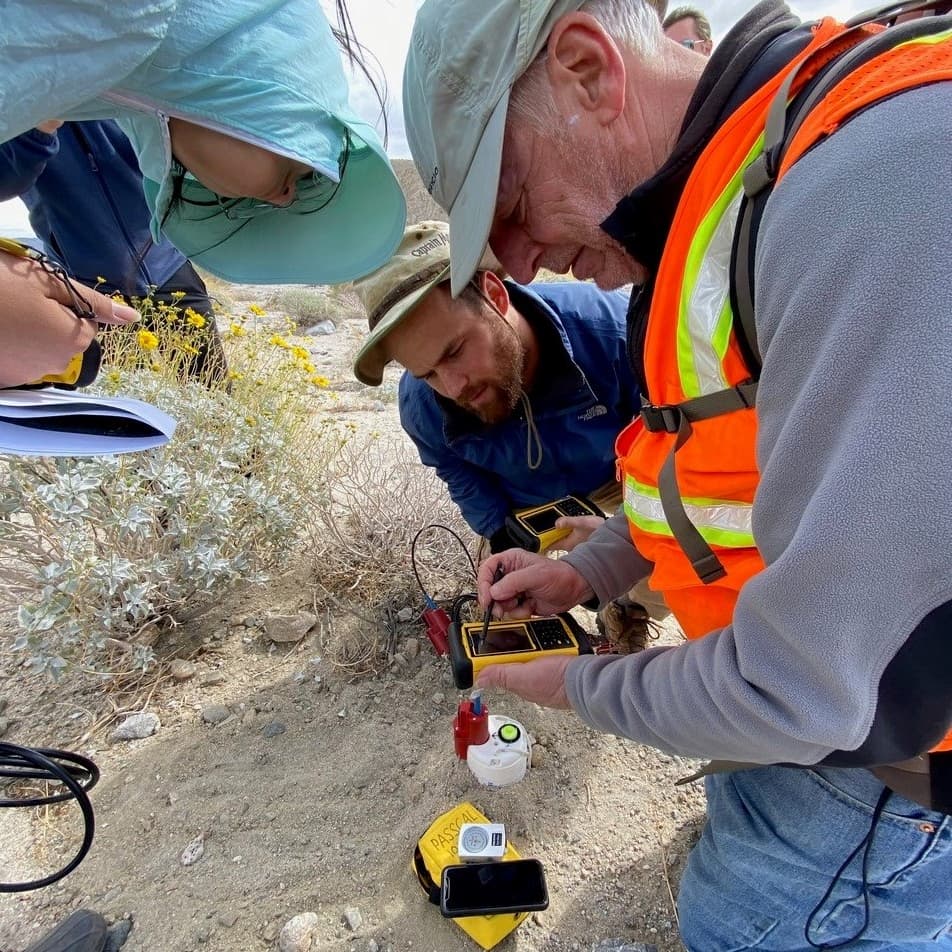 When Share came to the U.S. to pursue a Ph.D. at the University of Southern California, he used different tools to examine faults: those of seismology. This approach uses instruments called seismometers, usually deployed in arrays of multiple instruments, to measure the shaking of the Earth, from major earthquakes to tiny shudders. He came to USC to study the large fault zones along the U.S. West Coast, including the San Andreas and San Jacinto faults.

Share added a lot to the library of knowledge about this well-studied fault system. For example, using arrays of extremely sensitive seismometers, he was able to collect new data about the San Jacinto fault, determining that the rocks moving past each other on either side of the fault have quite different compositions and that the internal structure of a fault zone, the heart of the fault, can be quite variable from site to site.

“When an earthquake takes place there, because of the difference in properties of the rocks on either side of the fault, most of the shaking, or the most impulsive high amplitude shaking, at least, will take place in a preferred direction. That's quite important for earthquake awareness and hazard estimation,” Share points out.

Share continued using seismic tools to characterize the West Coast fault zones as a post-doc at the Scripps Institution of Oceanography. One surprising discovery he and colleagues made during this time was an unorthodox seismic signal in southern California that could help in the quest for earthquake monitoring. They noted that the regular transits of nearby freight trains made enough of a seismic racket to be detected by their instruments many tens of kilometers away.

“We could use these signals from the freight trains to image the Earth in a very different way,” Share says. “We have this massive energy source that runs more than ten times a day, at just the proper distance from our area of interest along the San Jacinto fault. So, we could use these repetitive signals to image fault zone structure and also monitor how that structure changes in real time.”

Previous research suggests that prior to an earthquake, the speed of seismic signals might change around a fault zone. So, theoretically, it would be possible to monitor for impending earthquakes by emitting seismic signals and monitoring their speed around faults. But this approach is not feasible if humans have to provide the nearly constant seismic signals. Using existing signals, like freight trains, might work, and could someday lead to the holy grail of seismic and tectonic science: developing a method that helps forecast earthquakes. Share and his colleagues will continue this promising work for multiple years in California and potentially beyond.

If using one of these techniques to study faults is good, Share figures, using multiple techniques simultaneously might be better. Now that Share has arrived at Oregon State, he is excited at the prospect of working at the northern end of the American West Coast. “I’d like to use a combination of these geophysical and seismic tools to get a more holistic understanding of the entire plate boundary that includes several major faults. Generally, people do not specialize in combining results from several different techniques, and I'm really trying to bring them together effectively,” he says.

“I have a passion for synthesizing these very different pieces of information,” he continues, “and I think that approach holds the key to achieving a holistic understanding of what the Earth is made of and how it's going to behave in the future.”