Imagine being a scientist who studies the fossilized remains of long-dead organisms in order to learn about the Earth at the time when those animals were alive. Now imagine that you can study those same organisms live, right now, in your lab. While this scenario sounds a little like “Jurassic Park,” the critters involved are much smaller than velociraptors, and much less dangerous to humans.

CEOAS Assistant Professor Jennifer Fehrenbacher studies foraminifera, forams for short, which are single-celled marine organisms the size of a grain of sand that create calcium-based shells. Elements in the surrounding seawater are incorporated into the shells as they grow, preserving a record of various aspects of that environment. When the forams die and sink to the ocean bottom, the shells can remain in the sediment for millennia, providing a record of climate and ocean conditions that scientists can read, even millions of years later. Among other things, Fehrenbacher examines the amount of magnesium in the fossilized shells to reconstruct ancient ocean temperatures. 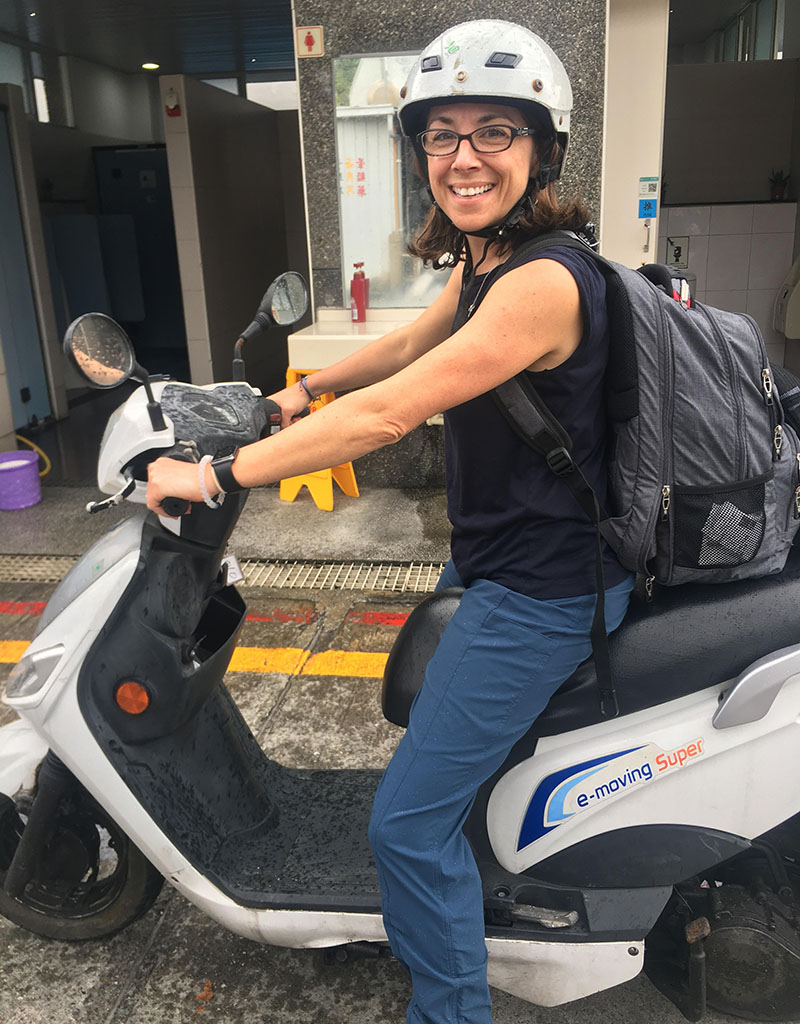 What role do forams play in the modern ocean? What eats them? How do they grow?

Ecological understanding of living forams is limited, she added. While scientists know a bit about what forams eat, other aspects of how they fit into the food web and the ecosystem are poorly understood.

Some of these answers can be found by keeping forams alive in culture, that is, in the lab. Studies of the living forams can also provide insight into the shell-building processes that lead to the levels of elements and isotopes scientists observe in the fossils. In order to learn more about how certain species of forams incorporate magnesium into their shells, Fehrenbacher has become an expert in culturing them.

In the summer of 2019, she and two of her graduate students had the opportunity to collect and culture forams at the Green Island Marine Research Station, a fairly new facility on a small island off the coast of Taiwan. Fehrenbacher was both a teacher and learner on this international expedition: She was invited to impart expertise on raising forams in the lab to the research team, and she used the opportunity to collect and learn about tropical, deeper-dwelling species she had not worked with before.

“The deep-dwellers are, frankly, weird,” Fehrenbacher commented. “They have more trace metal variability in their shells than other species, higher barium and manganese, and I think we can learn a lot about that variability if we raise them in culture.”

For the international Green Island research team, days were long. They often rose at 5:00 a.m., checked on the status of lab work, and then headed out on their small chartered boat into the South China Sea in search of their tiny quarry. Forams were collected using two methods, both labor-intensive. Spinose forams, those with long spindly spines, were collected by SCUBA divers one at a time in jars.

Yes, the divers collected single-celled organisms one at a time.

Fehrenbacher explained, “If we caught these species in nets, the spines would break, and it’s difficult for them to regrow the spines.”

The non-spinose forams, which live deeper in the water, were collected using a net towed behind the boat, as plankton usually are, but with one small, muscle-building twist – the nets had to be hauled back on board by hand, as the small boat they were using was not equipped with a winch.

Back at the lab, forams were sorted and placed in appropriate lab containers so that various research projects could get underway. Each individual foram is held in its own tiny tank. Why separate them like that?

“They often find each other,” Fehrenbacher said, ominously, “and one always wins. You end up with one live foram and the rest are dead.” (Maybe they are a little more like velociraptors than originally implied.)

Part of the goal of the expedition was simply to learn how to keep these species alive in captivity (no one has managed to get these particular species to reproduce in the lab, so keeping them alive for long enough to use in experiments is the goal). Feeding them was an adventure. Each foram was fed a piece of a young brine shrimp (sometimes known as sea monkeys) about every other day, but the prey had to be pipetted directly onto the critters’ rhizopodia, a sticky web-like network that surrounds the shells. Then, in slow motion, the prey is pulled toward their shell and ultimately consumed. Each successful feeding was cause for mini-celebrations among the scientists.

Each scientist on the expedition had their own research focus. Fehrenbacher and her student, Theresa Fritz-Endres, were interested in whether non-spinose deep-dwelling forams accurately record trace metal concentrations in the seawater around them. Kelsey Lane, the other CEOAS student on the trip, is interested in the microbiome of some species. While many species of forams harbor algal symbionts inside their shells, some do not; Lane wondered if these species have bacterial symbionts instead. She is using state-of-the-art imaging technology and DNA analyses to find out.

There were plenty of challenges for the team while on Green Island. The days were exhausting. A filmmaker that accompanied them lost an expensive drone when it crashed into the ocean and sank (“We gave it to Neptune,” Fehrenbacher said). Fehrenbacher, an arachnophobe, was dismayed at how many spiders lurked in places like laboratory drawers. A barium spike (seawater containing a known amount of barium in which to raise the forams) didn’t seem to work as planned. But the scientific rewards more than made up for these trials.

The research team is brimming with ideas for what they’d like to do differently next time, so Fehrenbacher is working hard to ensure that there is a “next time.” If she procures the appropriate funding, she and her students will return to Green Island and continue their quest for live forams. These living cells will serve as a sort of Rosetta Stone to help scientists translate what they find encrypted in fossilized foram shells, revealing many of the secrets of Earth’s past.