For the last 2.6 million years (the Quaternary period), the Earth has bounced between two main climate states – glacial periods, commonly known as ice ages, when frigid temperatures trigger the spread of continental ice sheets; and interglacials, when the ice sheets retreat and give way to a milder climate, like what we enjoy today.

But what if there was a third state? One that took place more than half a billion years ago, a frigid state lasting tens of millions of years and prompting a marine biological collapse (as there was no known life on land) more prolonged than the meteorite that wiped out the dinosaurs. Geologist Jessica “JC” Creveling at the College of Earth, Ocean, and Atmospheric Sciences has been studying the Snowball Earth hypothesis, which posits that our planet was once completely encased in ice. This cryogenic catastrophe would have killed off most early microscopic organisms and halted key biogeochemical cycles.

While our planet is currently cruising in the opposite direction of a Snowball Earth (let’s call it the Sweater Earth), Creveling said understanding the spectrum of Earth’s climate state gives us a fuller picture of our history and the surprising tenacity of life.

“We are in no way concerned that we’re heading towards a Snowball Earth event,” said Creveling. “But this is an opportunity to ask: what is the most extreme glacial state that the Earth is capable of? From a geological perspective, it makes you realize the Earth is really good at recovering from all kinds of things.” 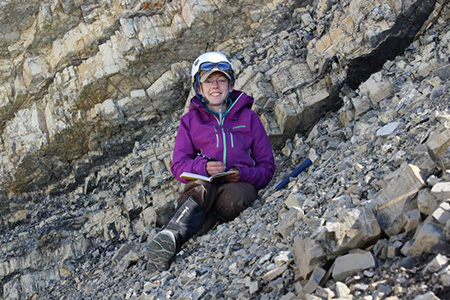 Scientists first suspected the existence of a Snowball Earth when they discovered glacial debris at sea level in the tropics, meaning ice once happily existed at the planet’s warm midriff. At that time, roughly 720-635 million years ago, continents clustered at the equator. These continents were breaking up from a single land mass, the supercontinent Rodinia, exposing them to ocean moisture and allowing rainfall hitting rocks to pull heat-trapping carbon dioxide (CO2) out of the air and store it in ocean sediment. As a result, the planet cooled. Sea ice formed at the poles and reflected radiation back to the atmosphere (called the albedo effect), further plummeting temperatures. Chemical weathering on the equatorial continents continued to remove carbon dioxide from the atmosphere, exacerbating the cooling induced by the reflection of solar radiation from polar sea ice. A runaway freeze eventually encased the planet in ice.

But Creveling was puzzled by something. If water covered the world following Snowball ice melt, why aren’t continents that were recently glaciated underwater today? Arctic Canada, for instance, was glaciated as recently as ~10,000-6,000 years ago, and yet is not submerged. In fact, GPS data reveal that Arctic Canada is actually rising, in essence rebounding after sloughing off the weight of an ice sheet that melted thousands of years ago.

“I always describe it as a mattress. You’re sitting on a bed, you stand up, it comes right back up. The time scale is much bigger with continents. In this instance it’s thousands of years, but the idea is the same,” Creveling said.

Creveling began to wonder, what was different about the post-glacial rebound following Snowball Earth? “How do we reconcile getting sea-level rise everywhere during Snowball Earth with what we see today?” she wondered.

Because there is no GPS data to measure continental rebound from 635 million years ago, Creveling put together a numerical model to simulate the aftermath of Snowball Earth melt. The model revealed that the sheer volume of ice melting on every continent overwhelmed the rebound, in essence overcoming the “mattress bounce” of the continents.

“Let’s think about North America with a Snowball ice sheet on it. North America’s ice sheet would melt and contribute to sea-level rise. Even though it would want to rebound, every other continent was also melting. So, that global melt would totally overwhelm North America’s rebound, and sea level would rise.”

Creveling said the most revealing part of her model was further confirmation of the Snowball Earth hypothesis. The physics of rebounding continents couldn’t have changed – just the conditions. She hopes to continue her research by visiting a site with geologic evidence of our former ice world and obtaining valuable observational data.

“One takeaway of this project is that the world is capable of wondrous and wacky things,” said Creveling. “We’ve only observed a subset of those things.”