In the footprints of clouds: Simon de Szoeke hunts for atmospheric cold pools

Cold, invisible phantoms creep over the surface of the tropical ocean, contributing to the formation of towering clouds and influencing local and global weather patterns. CEOAS atmospheric scientist Simon de Szoeke tracks them from the deck of a ship, like some atmospheric science version of the show “Ghost Hunters.”

The phantoms he chases are cold pools, puddles of cold air several hundred meters deep at the very bottom of the atmospheric boundary layer. Cold pools are found over land and sea, but de Szoeke has found that over the tropical ocean they play a particularly important role in the atmospheric heat budget.

De Szoeke likens these cold pools to “footprints” of convection. Over the tropical ocean, convection occurs as warm, moist air rises. As the air rises water droplets condense into clouds, warming the air and driving convection further upward. Cloud droplets can coalesce into larger drops that fall as rain. Rain evaporates and cools the air through which it falls, creating cold downdrafts that land and form extensive puddles of cold air—cold pools—that spread out on the ocean’s surface. 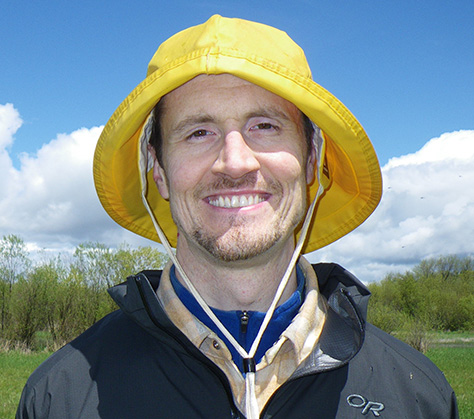 In a study with colleagues at the Pacific Northwest National Laboratory, de Szoeke discovered that, contrary to previous assumptions, cold pools near the surface of the tropical ocean are more likely than previously thought to organize towering clouds. The tallest clouds tend to grow best, the research shows, at the edge of intersecting cold pools. The cold pools corral newly developed clouds, increasing the probability that the concentrated moisture will cause the clouds to grow deeper.

Current climate models don’t seem to do justice to the important role of these atmospheric puddles, and many questions remain about their role in tropical and global climate and weather. To fill some of these gaps and gather additional critical data on the subject, de Szoeke went hunting for cold pools in summer 2011 on a research cruise in the equatorial Indian Ocean.

De Szoeke and collaborators installed instruments on the deck of the R/V Roger Revelle to measure temperature, moisture and other parameters at the bottom of the boundary layer. They watched while the vertical radar and other equipment collected data.

“You can actually see the cold pools from the ship,” de Szoeke marveled. “Over the ocean they form gusts at the front, so you can see a difference in wave structure on the ocean’s surface, with more whitecapping.”

This work to understand the role of cold pools on the bank of heat in the boundary layer and their influence on subsequent convection will contribute to refinement of climate and weather models. The tropical heat budget is important for forecasting rain in the tropics, formation of winter storms across latitudes and other large-scale processes that affect our lives and livelihoods. More insights will result from new observations de Szoeke and colleagues will make at sea this summer. He’d like to get a better grip on the ages of the cold pools he observes, for example, as well as refine models of the role of cold pools in heat exchange in the boundary layer.