Keeping an eye on the Arctic

Two CEOAS faculty members have helped to establish a new Long Term Environmental Monitoring site at a series of lagoons on the edge of the Beaufort Sea.

In the tiny (population: 200-ish) village of Kaktovik on the Beaufort Sea, well above the Arctic Circle, polar bears know a lot about seasonal cycles and local ecology.

Without fail, they show up in town just in time for whaling season in late August, when the permitted subsistence harvest of three whales takes place. The carcasses are piled on a spit of land, on top of the bones of whales harvested in years before, and the bears gorge themselves on scraps.

Scientists like CEOAS’s Byron Crump and Yvette Spitz would like to get as good as polar bears at understanding the ecology of Kaktovik and other locations on the Beaufort Sea, particularly in the series of shallow lagoons along the shore. These lagoons are a type of estuary, where freshwater from rivers and groundwater meets the salty expanse of the Beaufort Sea and the Arctic Ocean beyond. These productive ecosystems provide food, livelihoods and more to the communities on their shores. They are also changing, as ice seasons are shorter, permafrost is melting in places, and coastal erosion affects both the land and the water.

In order to understand the changes taking place there, the National Science Foundation approved a proposal in 2017 to add the Beaufort Lagoons ecosystem to its network of Long-Term Ecological Research (LTER) sites. The LTER program provides support for long-term monitoring of ecologically sensitive or significant sites, more than two dozen of them to date. Some LTER sites have been monitored for 40 years, providing invaluable data and a scientific finger on the pulse of these unique places. Crump and Spitz are members of the scientific team that submitted the LTER proposal and will lead aspects of the research effort at the site.

The Beaufort Lagoons Ecosystem LTER will monitor stations in three lagoons spread across more than 300 miles, with operations centers near the towns of Kaktovik, Deadhorse on Prudhoe Bay and Utqiagvik (formerly called Barrow). The overarching goal of the research program is to study how changes in shoreline erosion and freshwater inflows to the coastal ocean over seasonal, annual and longer timeframes influence nearshore food webs.

“The lagoons are special because they serve as a connection between the land and the ocean. We want to know how they transform organic matter that comes from the tundra. Are they a buffer, or is it more complex than that?” Spitz says.

One reason scientists are interested in the lagoons is that they are changing dramatically. “Like other lagoons, the Beaufort Lagoons are tied to what happens on land, and the land is changing with climate change and permafrost thaw,” Crump explains. “I see the lagoons as the ‘first responders’ to stress in the marine ecosystem.” 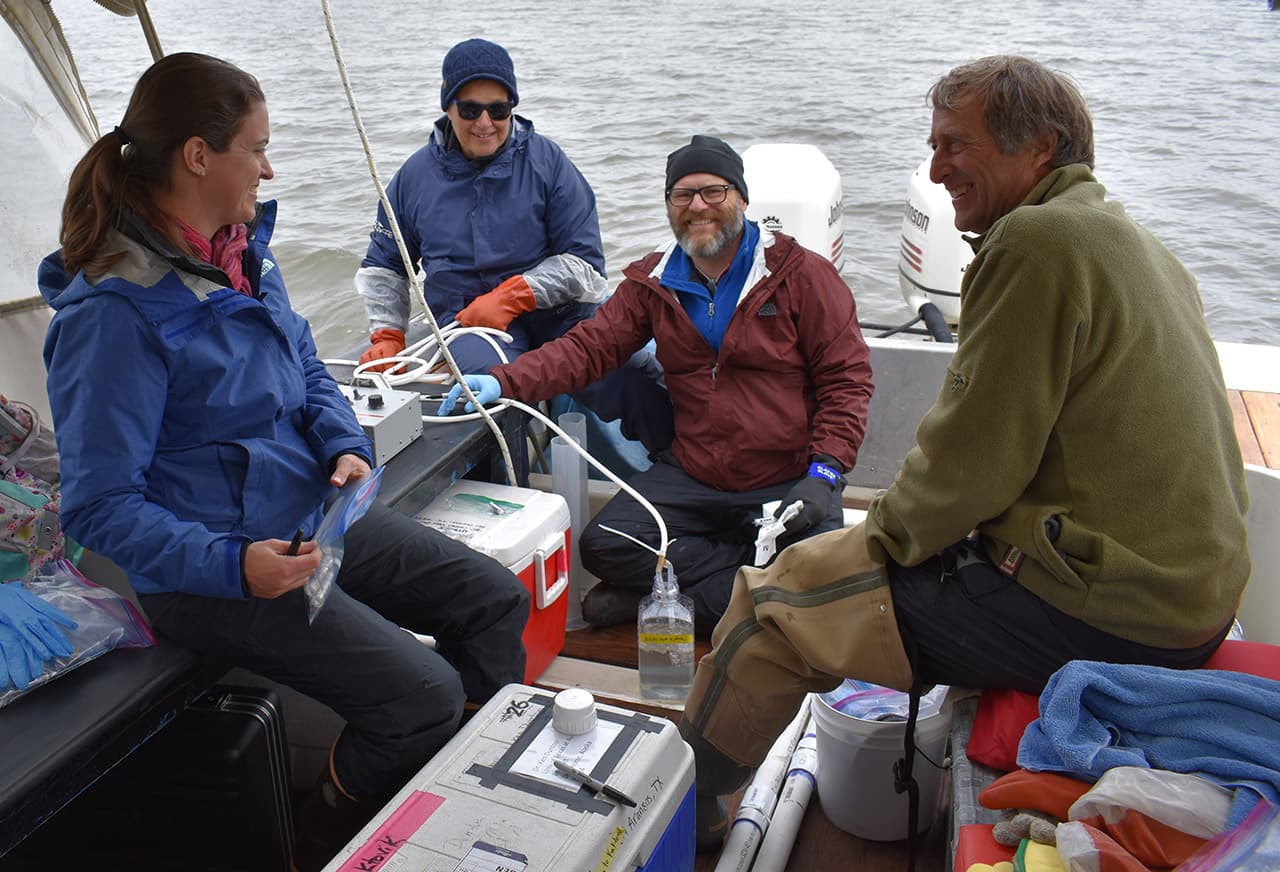 Crump and Spitz traveled to the area for the first time in summer 2018 to participate in reconnaissance work, choosing precise sampling locations to collect water samples and sediment cores, and generally working out logistics. They identified two shallow and two deep sites in each of the three lagoons, in order to compare those sites that freeze all the way to the bottom in winter to those that experience ice cover over unfrozen water below; the differential ice cover could affect nutrient cycles and food webs. Site choice is important to ensure that all necessary samples can be collected. For example, in order to take sediment cores, sediments at a given site need to be fairly uniform, unpunctuated by shells and rocks that would prevent collections of intact cores.

The field work continues this winter, with “winter” defined by the researchers as April, when there is typically still total ice cover on the lagoons but the weather has improved enough for field work. Crump, a microbial ecologist, will be responsible for studying the microbial community in the lagoons. In addition to determining which bacteria and other microbes are there, he will use a cutting-edge technique to examine microbial function: he will survey microbial messenger RNA (mRNA) in water samples, which provides insight into which genes the microbes are expressing. Rather than simply knowing which microbes are present at a given site, this technique reveals what they are actually doing. Understanding microbial activity will give scientists important insights into what’s happening at the base of the food web, which supports a diverse spectrum of marine life in the lagoons.

In addition to microbial ecology, the team of investigators will characterize the lower trophic levels in the lagoons, from nutrient levels to benthic communities, by collecting samples in winter, spring and summer at all sites. Some will be processed in lab facilities in the Alaskan towns and some will be shipped to labs of the many investigators working on the project, from Texas to Massachusetts to Oregon.

What to do with all this data? It is Yvette Spitz’s job to integrate it all into an ecosystem model describing how carbon moves through the lagoon ecosystems. She will couple the food web/sediment biogeochemistry model, one she developed for another system and will customize for the lagoons, with a pre-existing physical model in order to examine how currents, tides, and other physical factors affect the food web. She was glad to get to go to the field sites and see them for herself, so she has a first-hand understanding of sampling conditions and challenges. “It’s small but a very complex system to model,” Spitz notes. “I can already see that because the lagoons are so small, atmospheric forcing will be important on small scales.”

In addition to the core scientific team, LTERs aim to attract additional outside researchers who know that they can access basic data and infrastructure at these sites. For example, Crump is currently working on a proposal with a bird ecologist to explore whether microbial-based food webs provide food subsidies for birds in the lagoons.

Just as every journey begins with a single step, every long-term monitoring program begins with its first set of samples. With that mission accomplished, Crump, Spitz and their colleagues have begun the hard work of establishing an observatory for these imperiled, but important, lagoons. They look forward to returning for years to come, and maybe even overlapping with those smart polar bears some day.