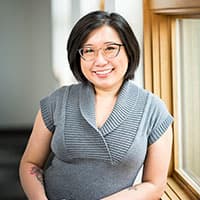 Katey Meyers is driven by curiosity. To her, there was never a question about completing a degree in science. The question was, what field? To fund her education, she joined the U.S. Air Force and began taking Ecampus classes while enlisted. While stationed in Korea, she had opportunities to connect with NASA scientists and realized climate science was the right fit.

After eight years in the military, Katey became a full-time student at Oregon State University. This summer she will be interning with the Lawrence Livermore National Lab in California. When she graduates, she hopes to join the “Hurricane Hunters”: the 53rd Weather Reconnaissance Squadron, an Air Force unit dedicated to studying and researching hurricanes. 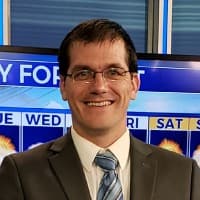 Ken Slama has wanted to be a meteorologist since fifth grade, when a local meteorologist’s presentation left him “infatuated with weather.” Even after high school, and after launching a career and starting a family, the idea persisted. Almost ten years after that presentation, Ken began pursuing his dream.

The first in his family to go to college, Ken earned his associate’s degree at Rogue Community College in Grants Pass then transferred to Oregon State. He is thriving at CEOAS, engaging actively in the many experiences available to students passionate about weather and climate science, such as the American Meteorological Society chapter and KBVR TV weather segments. He completed an internship with Portland’s KOIN 6 news as the station’s first weather intern and came away confident that “this is what I want to do.”

Being a climate science student has been an extremely positive experience, Ken said. “Labels don’t matter here. There’s a real sense of camaraderie.” 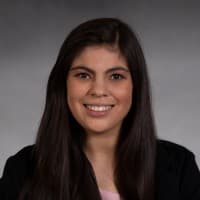 April Vogt began her journey at Portland Community College and the University of Hawai’i Manoa, where, in 2014, she began developing T.W.E.E.T. — that is, Totable Weather Engagement and Enhancement Technology: a micro SD card that can turn any smart phone into a miniature weather station, capable of processing near real-time data.

She later transferred to CEOAS, where her research focuses on tornado genesis and cold air funnels in the Pacific Northwest. She continues to work on T.W.E.E.T., now patented, which eventually could greatly enhance forecasting — for example, increasing tornado warning time from 15 minutes to 3-4 hours.

When she graduates, April will become the first in her family to earn a college degree. Without scholarships, she said, “I wouldn’t be here now.” Many students struggle to make ends meet, she observed. Financial support that allows them to focus on their studies will ultimately benefit society. 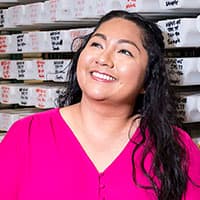 For Saray Valdez-Hernandez, who recently graduated, what started as an interest in meteorology has transformed into a passion for delving deep into the climate of the past, a field of science known as paleoclimatology. Financial support allowed her to participate in research including a study using an ocean sediment core containing 20,000-year-old microfossils. As a strong advocate for making higher education accessible, Saray is grateful that the Washington Scholarship will help many students like her explore their interests and get the most out of their college experience.

Saray began her Oregon State journey with help from the College Assistant Migrant Program, which supports students from migrant and seasonal farmworker backgrounds during their first year of college. She later returned to the program as a mentor and then became a CEOAS student ambassador, relishing the opportunity to tell prospective students about everything Oregon State has to offer.