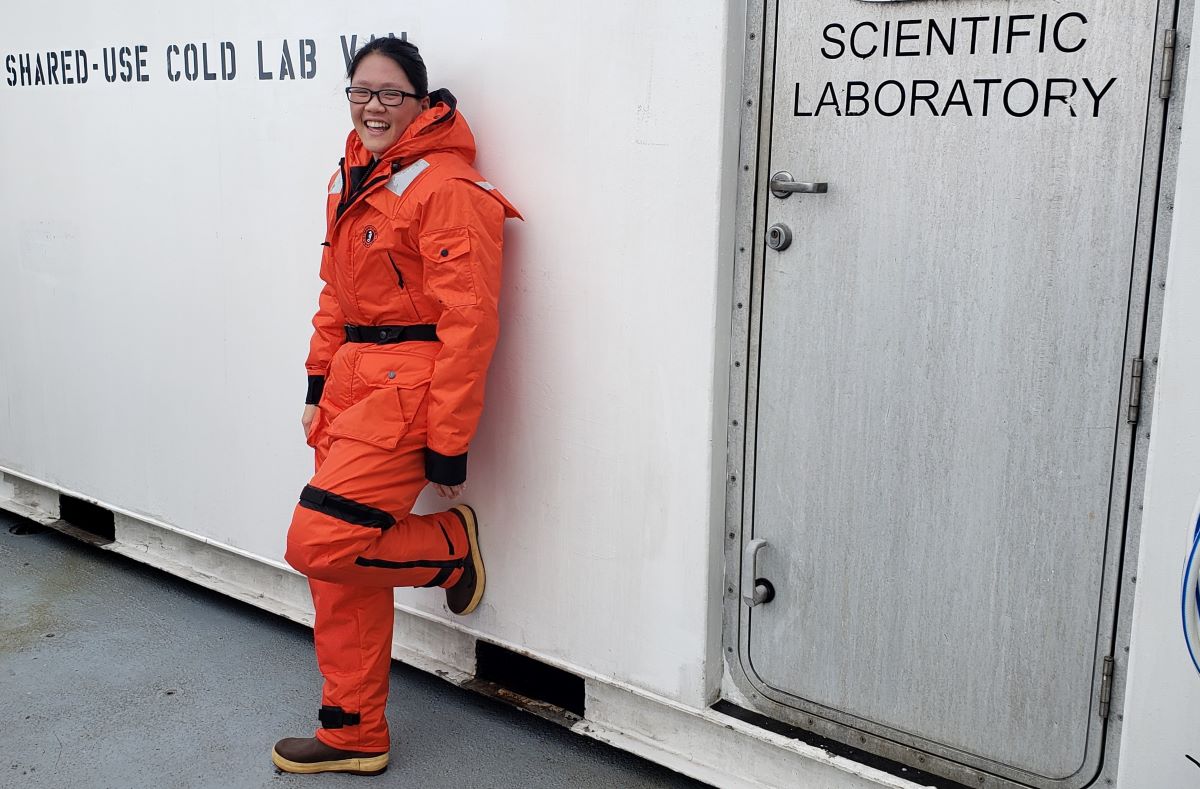 Michelle Nguyen had an early fascination for marine science and water in general. But there was only one problem. She lived in Dallas, Texas, about 300 miles away from the nearest ocean. So, she did what any kid with an obsession for the ocean would do: she started SCUBA diving at age seven and dove feverishly into swim lessons. She relished family vacations to beaches and visits to the aquarium.

“I really enjoyed watching any and all ocean documentaries and going to the aquarium. I’d drag my parents through the aquarium and would refuse to leave until we saw EVERY EXHIBIT,” she recalls.

Not surprisingly, Nguyen made a straight shot into marine biology during her undergraduate studies at Texas A&M University at Galveston. A first-generation Vietnamese American and first-generation college student, Nguyen knew she was on the right path. A course in oceanography her first year introduced her to the far-reaching impacts of climate change on ocean ecosystems. She was inspired to study phytoplankton in a research laboratory her sophomore year, specifically how the Deepwater Horizon oil spill may have impacted the physiology of these small organisms so vital to the marine food web.

“This course opened my eyes to the large-scale processes that drive the small-scale organismal responses,” Nguyen says. “I loved having the ‘big-picture’ perspective. I thought, ‘what better way to study ocean ecosystems than to gain a better understanding of the base of the food web?’”

Nguyen also participated in the Research Experiences for Undergraduates program, an NSF-funded opportunity where undergraduates work in research programs of a host institution. Nguyen spent the summer before her senior year at the University of Maryland Center for Environmental Science - Horn Point Laboratory, conducting an oyster larvae starvation tolerance study.

The experience, she says, solidified her passion for research and marine invertebrates. It also attracted her to Oregon State University for graduate school. She is now working with George Waldbusser, an ocean ecologist in the College of Earth, Ocean, and Atmospheric Sciences who has conducted several studies on how ocean acidification impacts growth and shell-building of oysters in their early life stages. Working with Waldbusser was a huge draw, as was the friendly atmosphere when she visited campus.

“During my visiting weekend, I was so impressed by the cooperative vibe of the faculty. The work being conducted here is so incredibly collaborative, and CEOAS is able to hold its own as one of the top oceanographic institutions in the nation,” she says.

While Nguyen was geared up to continue working with oysters, Waldbusser offered a new and exciting opportunity to study Oregon pink shrimp through a project funded by Oregon Sea Grant in collaboration with Oregon Department of Fish and Wildlife. Nguyen jumped at the chance. Despite being the second highest grossing fishery in the state of Oregon (Dungeness crab being the first), very little is known about their growth and development. In fact, the last Oregon State student to conduct laboratory research on pink shrimp larvae was in 1975, so Nguyen has the opportunity to fill in some critical knowledge gaps that could bolster our understanding of how ocean ecosystems are changing and support a critical commercial fishery as well.

Through both lab and field work, Nguyen is specifically examining how ocean acidification and warming ocean temperatures may affect the physiology of Oregon pink shrimp in their early life stages, a critical time for growth and development. An experiment by Waldbusser the year prior to Nguyen’s arrival showed that there was a 17% decrease in the larval growth rate under the lowest pH conditions, compared to the elevated pH.

“In other words, the shrimp were smaller under more acidified conditions,” Nguyen says.

Nguyen will be taking the research a step further, not only examining how the growth and respiration of larvae respond under pH stress but also in combination with temperature stress. In the lab, Waldbusser’s group exposed pink shrimp larvae to a dozen different pH and temperature combinations to simulate current and future ocean conditions. While Nguyen is still measuring samples, she has already identified some sensitivities. In general, the effects of pH were amplified in slightly elevated temperatures relative to cooler temperatures. In the warmest temperature, very few larvae survived the entire experiment.

In addition to her shrimp work, Nguyen was involved in another study, funded by the State of Oregon and in collaboration with ODFW, focused on Dungeness crab and shrimp larvae (although the science party did not catch any shrimp in the nets).  This study took her to the open ocean aboard R/V Oceanus where she observed crab swimming behavior under acidified conditions. The rough seas proved difficult and hindered some of her scientific plans, but Nguyen still appreciated the experience.

“The ocean was so turbulent the first few days that we couldn’t actually deploy any nets or instruments. The rough conditions also led to some nice character-building seasickness,” she says. “I couldn't keep a single ounce of food or water down either. It was nice to try to keep busy with tasks around the ship, but as soon as the activity stopped, the world seemed to spin out of control again.”

The waters eventually calmed, and Nguyen got her sea legs. And while she can laugh about the experience now, she did have a moment of doubt about her capacity to do oceanographic research. “I'd be lying if I said there wasn't at least a brief moment onboard where I was reconsidering my career choices. However, this was such a memorable experience. I wasn't doing much laughing while onboard, but now I have a truly hilarious and unforgettable cruise experience to look back on!”

Waldbusser says that Nguyen’s resiliency and ability to go outside her comfort level is a key indicator of future research success.

“Michelle is truly remarkable in her ability to throw herself into a situation, be uncomfortable, have some doubts, but then ultimately figure out what she needs to do to move forward and work hard at it,” says Waldbusser. “She has really proven herself this past year.”

Safe and sound on land, Nguyen has a busy year ahead toward completing her master’s, with more data analysis, sample processing and writing on the agenda. But she is unphased by the work, happy to live out her childhood passion and contribute knowledge toward understanding and protecting marine ecosystems.

“Climate change and ocean acidification are complex multi-stressors, and the magnitude of their effects in the future remains largely unknown. This work will allow us to better understand and forecast what we can expect in the future,” she says. “I can’t wait to see how much I am able to learn in the next year or so. Oregon State and its faculty are truly something special, and I am so incredibly grateful that I have the opportunity to learn and work here.”