The Ocean Observatories Initiative is a global system of instruments deployed to monitor the world’s oceans, keeping an unblinking electronic eye on everything from water temperature to oxygen levels to zooplankton communities. Recently, one component of the OOI located just off Oregon’s shore, a buoy in the assemblage of instruments called the Endurance Array, picked up a signal of a decidedly terrestrial phenomenon: The devastating forest fires that swept across Oregon in early September of 2020.

The Endurance Array’s Oregon Shelf Surface Mooring, located 10 nautical miles west of Newport, was enveloped by wildfire smoke carried on unusual east winds, turning coastal skies an eerie reddish brown. While the buoy’s instruments are mostly aimed at monitoring the ocean below, meteorological and atmospheric measurements are taken, too, and so the arrival of the plume was captured by multiple instruments. 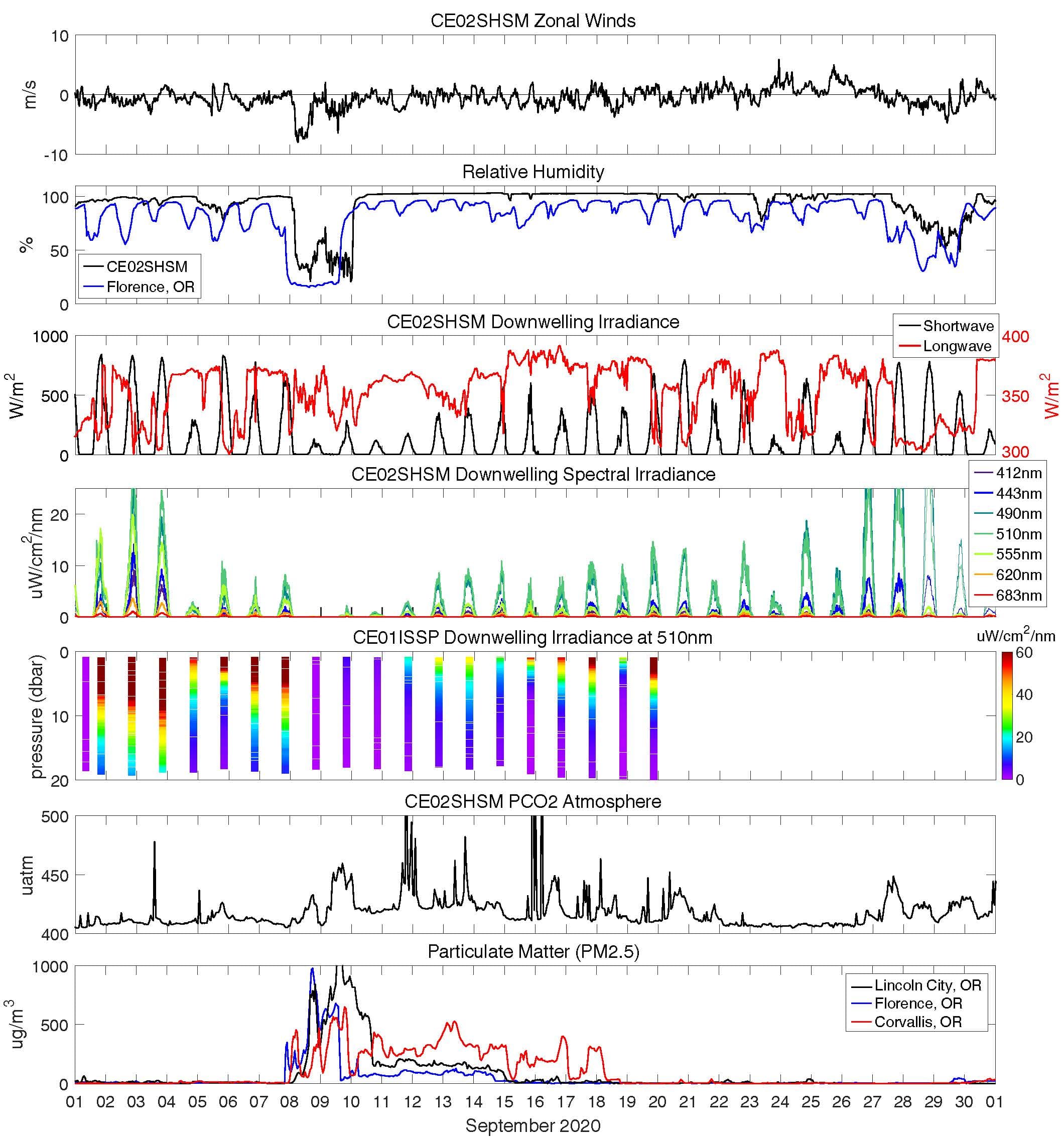 Data from the Endurance Array indicating the presence of wildfire smoke. Graph by Craig Risien. For a deeper dive, see the OOI data explorer.

“Every Monday, Chris Wingard, one of the OOI technicians, does a deep dive into the data and looks at every instrument to see if the data values they are collecting are reasonable,” explains Jonathan Fram, the OOI Endurance Array project manager. “Chris took a look a few days after those early September fires started and first noticed that the relative humidity was extremely low, at levels unheard of out there. And then he looked at everything else.” In fact, the relative humidity levels (<18%) were the lowest ever measured by the instrument, first deployed in April 2015.

Other notable anomalous measurements included reduced sunlight in the air above the instrument and reduced light penetrating the water’s surface, especially in some wavelengths. The most eye-opening result, Fram says, was the remarkable increase in carbon dioxide in the air, which was about double normal values. Burning trees release CO2, so the direction of the change was not surprising, but the magnitude of change was. All of these signals persisted for a few days to a week.

Fram and his team have not yet analyzed data on presence of zooplankton in the water column, but he is interested to see whether these microscopic animals reacted to the decrease in sunlight caused by the smoke. Many zooplankton species migrate to the surface at night, and, as the OOI instruments noted, they were fooled by the August 2017 solar eclipse into undertaking that migration during the day as the sun disappeared.

The whole OOI team was intrigued by these data. “Climate change has always been a science driver for OOI, but I never imagined we would see effects from terrestrial events like these fires. It's very sobering to think that the amount of sunlight and carbon dioxide entering the ocean's surface is being impacted over millions of square kilometers for weeks at a time,” said Ed Dever, principal investigator for the Endurance Array.

It is certainly worthwhile to ask whether these anomalies are ecologically significant; there is some evidence that wildfire may have a range of detectable impacts on marine ecosystems, including in Santa Barbara and Fidalgo Bay, Wash. The role of OOI in such interdisciplinary work is to provide those data. “I just want to let people know that these data are freely available, so if you're the type of scientist who would like to understand the implications of something like this, please use it – we’re happy to help facilitate that kind of work,” Fram says. OOI is working on a new website and data portal that will make it easier than ever to acquire data from the program.

While the potential for a fascinating and important ecological story based on these data is tantalizing, Fram is careful to point out that the real story of the 2020 Oregon wildfires was the tremendous and traumatic loss of life and property. If these fires are to recur, however, and most indications are that they are likely to, it will be important to understand the implications for all ecosystems. The OOI stands ready to help.

For more information about the Ocean Observatories Initiative, and the Endurance Array in particular, see oceanobservatories.org/array/coastal-endurance/.