Getting their Sea Legs

In gale-force conditions, three CEOAS REU students tough it out on board R/V Oceanus

Within days of arriving at Oregon State University in mid-June, a trio of intrepid summer undergraduate students plunged headfirst into the literal ups and downs of ship-board oceanographic research on a three-day research cruise off the Oregon coast. It would probably be insensitive to say that the experience taught them to "sink or swim," given that the "sink" option didn't seem so far-fetched.

The three women embarked on the cruise aboard Oceanus, a research vessel operated by the College of Earth, Ocean, and Atmospheric Sciences (CEOAS). Alongside graduate students and other researchers, the students braved gale-force winds and high seas to collect sediment cores for their summer research projects. As the ship pitched and rolled, so did their stomachs, but they helped with all aspects of core collection while learning about the challenges of life at sea.

The students, Alyson Churchill, Iris Romo and Angelica Robles, were supported by a grant to OSU from the National Science Foundation’s Research Experience for Undergraduates (REU) program. REU is a paid ten-week internship program in which students conduct original research under the tutelage of faculty advisors at research facilities around the country. Oregon State University hosted 29 marine sciences REU students this summer, split between campus CEOAS labs and the Hatfield Marine Science Center in Newport.

"These ladies did a fantastic job. They dove into the deep end and were super-productive even through the rough conditions. They were ready to work," said Maureen Walczak, CEOAS post-doc and organizer of the cruise.

The cruise was designed specifically to give the REU students the opportunity to independently conduct the entire research project: collecting samples (in this case, sediment cores) analyzing their contents for clues to the geologic past, and developing conclusions. With only ten weeks to complete a project, it is sometimes more efficient to provide these summer students with previously collected samples, but it is much more instructive for them to participate in field collections when possible.

"We were there from start to finish, from labeling the empty coring tube to seeing them get sent down to slicing them open," explained Churchill, a rising senior studying geology at Colby College in Maine. In addition to gaining an understanding of how to collect marine sediment cores, Churchill learned that an important aspect of this work is that "you really have to work together and trust each other" on the ship.

The objective of the cruise was to collect cores containing sediments deposited during the window of time when the Missoula Floods occurred – cataclysmic deluges that tore through the Columbia Gorge at the end of the last ice age, between approximately 15,000-20,000 years ago. The sheer force of those careening waters carried huge volumes of terrestrial sediments down the Columbia and deposited them in the ocean.

Despite the sea state, the cruise was a success, bringing back 11 cores, 5 of which were jumbo piston cores ranging in length from around 8 to 11 meters, probably among the longest cores of that type ever taken from Oceanus, according to Walczak. 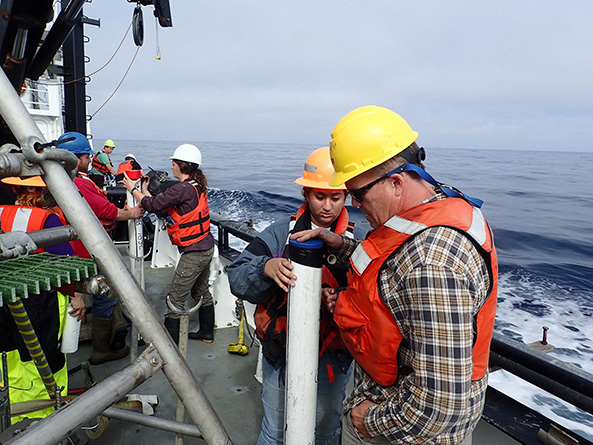 Preliminary examination of the cores suggested that the Missoula Floods window was captured, providing ample fodder for all three student projects. Churchill worked with Walczak, Associate Professor Anders Carlson, and CEOAS graduate student Heather Bervid to use OSU's state-of-the-art x-ray fluorescence scanner to examine the chemistry of the sediments in the cores in order to determine where, exactly, they came from. They were looking for evidence of the Missoula Floods by comparing these chemical signatures to the well-documented signatures of the rocks of the Columbia Basin.

Portland State University geology student Iris Romo used a different approach to search for evidence of the Missoula Floods in the cores: she looked for high concentrations of freshwater diatoms, a type of phytoplankton that would only show up in the cores in high numbers if the massive floods flushed them downriver and out to sea. Romo was trained in this technique by Cristina Lopes, a former student of CEOAS's Alan Mix and now a post-doc at the Portuguese Institute for Sea and Atmosphere.

Angelica Robles embarked on her senior year at the University of Puerto Rico this fall; she is studying environmental sciences with a minor in geography. This summer she searched for evidence in the cores of shifts in regional wave climate. Higher wave and current energy can move sediments with larger grain sizes, which might be reflected in the grain sizes in the cores. Her project built on prior research by CEOAS researchers using NOAA buoy data demonstrating that wave heights in the region have been increasing since the mid 1970s. She worked with Walczak and Associate Professor Joseph Stoner to try to determine if this recent increase in wave energy is an unusual feature of modern climate or part of a longer cycle or trend.

Pulling the Cruise Together

The Oceanus cruise was Walczak's brainchild: with support from co-PIs Stoner, Mix, and Carlson she obtained a grant well over a year ago from a state fund to support research vessel time for projects with a strong educational component. To support the core collection piece of the cruise, she obtained discretionary funding from CEOAS Dean Roberta Marinelli and from funds donated by Ken and Donna Barrow, long-time supporters of student research and student ship time at OSU.

The cores collected will drive future research projects for years to come. "The research questions raised by these cores go far beyond what these students can do in ten weeks," Walczak stated. "There are a number of doctoral projects' worth of work to be done on them."

Perhaps some of that work will be done in the future by these three ambitious undergraduates if they return to OSU as graduate students.