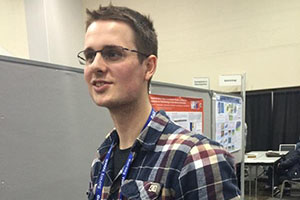 As a child, Ryon Merrick floated marshes and poked around tide pools at Wood Neck Beach in Massachusetts. His early exposure to such a dynamic ecosystem sparked an interest in physics, which allowed him to make sense of the ever-changing landscape using equations. But it wasn't until Oregon State's new undergraduate Climate Science option that Merrick began to apply his love of physics to a fascinating focus of people, climate change, adaptability and communications. Merrick is now the first graduate of the Climate Science program and has his sights set on a career in climate communications. We caught up with Merrick to learn more about his time at Oregon State and future plans.

Where did you grow up?

I grew up in Falmouth, Massachusetts, about a 15-minute drive from the Woods Hole Oceanographic Institute (WHOI). The town was a fascinating nexus of scientific thought. Between WHOI, the Marine Biological Laboratory, the Woods Hole Research Center and the NOAA center, there was an abundance of incredible work being done at all times. My father was an employee with NOAA, so I often found myself in social circles alongside amazing scientists. Growing up in this environment was akin to marinating in the culture of science while also having constant access to the beaches, wetlands and beautiful forests that feed my natural interests.

Why did you choose Oregon State?

I was born in Seattle, and so I've always felt a pull to return to the Pacific Northwest. My interest in OSU in particular had to do with the programs in ocean science, fish and wildlife and earth science. Oregon State has been an incredible location to study and has provided ample opportunity to build an interdisciplinary focus in all of these programs, as well as ones I did not see coming (anthropology).

What has been the most useful or inspiring aspect of the program?

I believe climate will not manifest itself in a single avenue of research. Rather, it will manifest its impacts differently in each discipline. For this reason I believe it must be approached from an interdisciplinary perspective, and the Climate Science program has allowed me to do just that. It has also allowed me to study our planet's climate history, projections of the future, geology, oceanography and ecology. Personally, I believe the interdisciplinary nature of climate extends beyond these more quantitative sciences to the social sciences as well. Classes such as U.S. Energy Policy, Community Values and Natural Resources and the Ethnographic Field School program, where I did interview-based field research on renewable energy development, gave me the opportunity to experience climate topics in its application to human populations.

What would you tell a prospective student who is interested in this option? What should she or he do to prepare?

Enlarge your toolbox at every given opportunity. A climate scientist needs to be more than an excellent programmer or mathematician; he or she needs to be a competent communicator. Also, be sure to learn a programming language–you're going to need it.

Besides the Climate Science option, you have minors in physics and anthropology. Do you see a future career that brings these disciplines together?

As I look at the current discussions of climate change, and at my own future career, I cannot help but see significant deficiencies in how we approach communicating climate science and the impacts of climate change. I want to take my backgrounds in physics and climate science and combine them with my fascination in anthropology to work as a communicator, bridging the gap between academic research and the human populations already facing impacts. I believe mobilizing populations to effectively interact with climate change will take both well-focused climate models with accurate predictions, and people on the ground applying this knowledge to adaptation strategies.

I am fortunate to already see this vague idea taking shape. Now, working at the Woods Hole Research Center, I am having the chance to assess the economic, environmental, social and health effects of climate regulation and legislation. This interdisciplinary work is possible because of my varied background.

Tell us about your research with Assistant Professor Jennifer Hutchings.

Jenny and I performed the first analysis of basal melt onset using Ice Mass Buoy (IMB) data from the Arctic to better understand sea ice dynamics. Previous research has looked at the timing for surface melt, but my project was the first to review the timing of the melt season by looking at the base of sea ice. This project has allowed me to use my programming training to create software, which can be used by other groups to analyze IMB data. It also exposed me to the process of conducting and publishing research. I am now working to create a manuscript from this work and intend to submit it for publication by the end of the summer.

You presented your research among many esteemed scientists at the 2015 American Geophysical Union annual meeting. What was that like?

Being able to present a poster at my first conference was an incredible experience. Not only did I get to deepen my knowledge of my research through conversation and discussion, I also got the chance to see hundreds of other projects and hear about people's fascinations and interests. The variety of disciplines present was baffling, and the entire experience was very enriching. I hope to attend as many of these sorts of events as possible in my future!

It's been an honor to see this program develop, and I feel honored to be earning this degree. I am glad to see a discipline so willing to step away from the common pathway of developing a singular focus. The availability of the climate science curriculum here at OSU has kept me engaged and has let me follow my scientific fascination.