Message in a Map

In January 2010, a powerful magnitude-7 earthquake rumbled under Haiti. It killed more than 150,000 people and displaced hundreds of thousands of survivors. Amid the devastation, a fleet of volunteers across the globe sprang into action to create a comprehensive crisis map. These concerned citizens used OpenStreetMap to crowdsource and produce the most detailed roadmap of Haiti ever produced, in just a matter of days. Overlaid on the map were live tweets and texts from Port-au-Prince, acting like digital rescue flares for the distressed. As a result, scores of lives were saved.

Hazard mapping is nothing new. But the speed and manner at which the Haiti map came together — crowdsourced by digital humanitarians from across the world — represented a new kind of crisis map. People were mapping Haiti without ever stepping foot in it.

"That would have been an impossible task for professionals," says Bo Zhao, a newly hired assistant professor of geography in the College of Earth, Ocean, and Atmospheric Sciences. "Because of this, people have begun to rethink the power of the citizen scientist."

Zhao uses the Haiti crisis as an example of how location-aware data and dynamic mapping have changed the world. Digital maps that capture our landscapes, our social media identities and our gaming impulses have proliferated. As both researcher and teacher, Zhao explores how interactive mapping can serve as a new medium to convey vital information about our society and even ourselves. 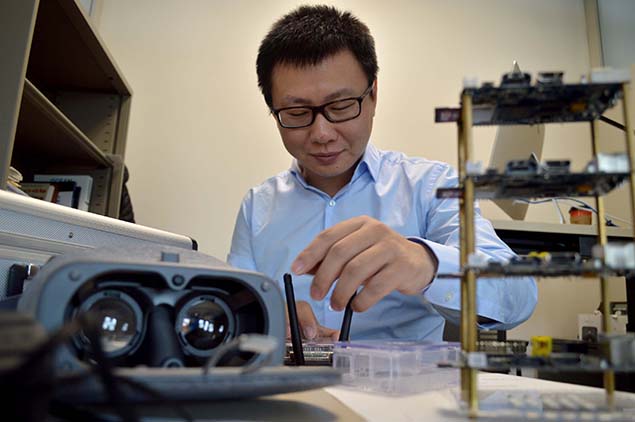 Bo Zhao with one of the virtual reality headsets that will soon be part of a new course where students collect, map, and interact with geospatial data.

"Maps are still trending and in transition," Zhao says, "But they are vectors of storytelling, generating greater knowledge based on citizen contributions."

Since arriving at Oregon State, Zhao is already using maps to tell some interesting tales. In one project, he mapped the gay community in China — a community still considered taboo in that country. Using location data from a social media application, his map displayed where gay people congregated in Beijing, and at what times. With greater awareness of this community, including where members go and when, public health facilities can optimize their resources, services and support.

On another front, Zhao is investigating a concept called location spoofing, where users intentionally mask their true geographic locations. Most buzz about geo-spoofing centers on the sinister: nefarious hackers counterfeiting the navigation of a ship and taking control. But Zhao offers that location spoofing can also protect our geo-privacy.

He cites the Dakota Access Pipeline protests that have pitted indigenous communities and their allies against the federal government over a proposed underground oil pipeline near the Standing Rock Sioux Reservation. Protest sympathizers on Facebook falsely "checked in" to Standing Rock to protect the identity of the real protestors.

"One major argument I make is, geography is usually seen as rational. But maps can lie. There can be intentional noise. But this lie isn't always a bad thing. Those spoofings are made to protect someone's geo-privacy," he says.

Zhao is also taking digital maps to the classroom, urging his students to tell their own unique story through this vivid medium.

"One thing I tell my students is, think about a map as a way to communicate with your audience," he says. "Some will be your peers, your future employer or even the public. For example, if a map is designed for the public, a social media component will attract more individuals to read this map, and a detailed usage instruction is necessary for amateurs. If designed as a showcase to a future employer, it is better to link the map with the source code on GitHub. In essence, how will you reflect the map to better communicate with them?"

In helping students answer that question, Zhao recently received a Learning Innovation Grant for a course that will pair field data, modeling and virtual reality. Students will eventually collect spatial data in the field with drones. Then, they will map the virtual environment before interacting with it using virtual reality headsets. Students could, for example, interact with an erupting volcano and gain a close-up view of natural disasters.

It sounds futuristic. But Zhao's aim is to bring together data, the environment and people under one domain, allowing students to collect and interact with geospatial information and discover perhaps a new message in a map.

"Dynamic maps are emerging as a trendy way to communicate with the pubic, or whoever your audience is. That is something I'd really like to teach the students," Zhao says.