Some people have a passion project, a hobby or side venture that excites and inspires them, something they do solely for their own satisfaction. For CEOAS Ph.D. student Ellen Lamont, everything she does is a passion project. She is passionate about mountains, about international travel, and about science outreach. Now that she has been awarded a prestigious 2018 Fulbright scholarship, she will be able to combine all three, conducting research and outreach in India on the forces that created and continue to shape the Himalayas.

Lamont is one of six Oregon State students awarded Fulbrights this year. These students are among over 1,900 U.S. citizens who will study, conduct research and teach abroad for the 2018-2019 academic year through the Fulbright U.S. Student Program. Recipients of Fulbright awards are selected on the basis of academic and professional achievement as well as record of service and leadership potential in their respective fields.

Lamont is beyond excited about the opportunity that awaits her in the Himalayas.

“If I’m going to study mountains, I figured I might as well start with the crème de la crème of mountains, where it’s complicated and crazy and impressive and majestic!” she declared, passion on full display.

Lamont’s path to the Fulbright required perseverance. A daughter of a mechanic and a school cafeteria worker in western Pennsylvania, she was a first-generation college student. While her family was supportive of her quest for education, she had to navigate these first steps by herself. “I didn’t really know anything about college,” she explained. “I knew people went but it was a pretty abstract concept. I don’t think I went to high school with more than a handful of classmates who went to college.”

She began at Kent State University in Ohio, where she went on her very first geology field trip. “We looked at glacial deposits – that’s all that northern Ohio has – and I was amazed that there is a force powerful enough to move boulders! It blew my mind,” she recalled. She quickly learned that field geology would be the perfect discipline where she could combine her passion for science with her passion for being outdoors. 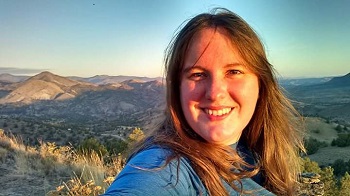 Continuing her undergraduate studies at Indiana University of Pennsylvania, she served as a field assistant on a research project in Taiwan, where she fell in love with both travel and the geology of active mountain ranges. For her master’s degree, she continued the Taiwan work at the University of Connecticut.

Onward to graduate school at Oregon State, where she is working with CEOAS geologist Andrew Meigs. Her Fulbright will support a collaboration with the Wadia Institute of Himalayan Geology to sample and map geologic faults in the sub-Himalayan foothills of India.

Her project will address a long-standing debate among mountain geologists: Which force is more important in forming mountains, climate (precipitation, erosion) or tectonics (processes that deform the Earth’s crust)?

“Of course it’s not necessarily one or the other, but the discussion centers on whether one is dominant, or how the two are balanced,” Lamont explained. “The debate hasn’t progressed in the past 20 years.”

She and Meigs believe that the key to moving the debate forward lies in the foreland of mountain ranges formed by the buildup of material where tectonic plates collide, like the Himalayas. Most work on mountain formation has focused on characterizing faults and timelines in the hinterland, the area behind the mountain wedge. Lamont believes that the debate stagnates in the hinterland and the foreland is where the solution lies.

“We think we can look at the foreland in a new way,” Lamont explained. “What we want to know is, when did the foreland grow, and how was growth divided among individual faults? When did the faults develop, in what order, and how do they vary spatially?”

This timeline can then be compared to what is observed in the hinterland. “If we see that the foreland has been developing more recently than the hinterland, we’ll know that tectonics is likely the dominant force. If it’s the other way around, climate is likely dominant,” Lamont said.

Lamont’s Fulbright project will include an outreach component, which she hopes will inspire school children to be interested in travel, geology and Earth sciences in general. She will maintain a blog and YouTube channel while in India, with other components to follow when she returns.

“Outreach is so important to me, because it was such a huge part of my own story,” Lamont said. She is particularly interested in reaching underrepresented and marginalized groups, including potential first-gen students.

Lamont will leave for India in mid-August, and stay for nine months. She’s been reading everything she can about India, trying to paint a nuanced picture of the country for herself before she gets there. She doesn’t yet know where she will be living, what the field site will be like, or really anything about her daily life there.

Lamont said with a smile, “Part of the fun is not really knowing.”