Rivers have inspired the musings of many a writer, from Heraclites on the ever-changing nature of streams, to David James Duncan on the finicky art of fly fishing. Even gloomy Edgar Allan Poe celebrated the power of streams, comparing a flowing river to the beauty of a young woman.

But few writers have tackled a perhaps grittier subject: How do rivers work? Why do they run where they do, how can they flood one year and dry out the next, and how do we predict their behavior? These and other questions are the subject of a trade book by Sean Fleming, a courtesy professor and alumnus of the College of Earth, Ocean, and Atmospheric Sciences at Oregon State University. His Where the River Flows (2017, Princeton University Press) takes readers to rivers across the globe, where he explores answers to his own queries.

“There are a lot of books about water resources or trips down the river, and they are fantastic. But there’s no popular science book out there about rivers themselves,” Fleming says. “The larger goal was to explain a little bit about how they work.”

Fleming, a geophysicist and data scientist, is perhaps more qualified than a poet or nature writer to deliver on that goal. Besides two master’s degrees from Oregon State and a Ph.D. from the University of British Columbia, Fleming has two decades of applied science experience. He’s run his own data science consultancy, led a government R&D unit, and conducted research in glacier science, hydrology, climatology, and statistics and machine learning. The underpinnings of his diverse work are the elegant equations that govern many natural systems, including rivers. 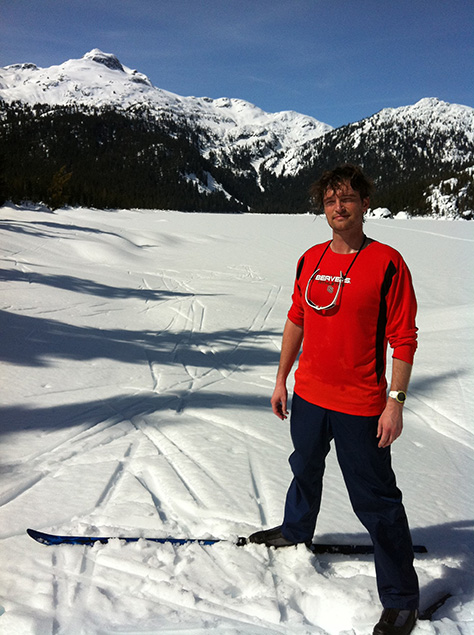 His book decodes those mathematical symbols for readers, waltzing them into the unknown world of moving water and revealing subtle but far-reaching and sometimes-surprising connections. He writes that rivers are like stock markets, with cycles of boom and bust, and with some of the same underlying math. He dedicates a chapter to the connection between rivers and outer space, such as the use of satellite imagery to track seasonal snowpack and make forecasts of water supplies. And he explores the implications of information theory – the foundation of our modern technological society – like how it can provide a way to understand relationships between weather, water and ecosystems.

“Think of the onset of autumn rains that raise river levels and in turn trigger salmon runs,” Fleming says. “You can mathematically represent that as a flow of information from the sky, to rivers, to ecosystems. In essence, clouds talk to fish, using rivers like a fiberoptic internet cable.”

Though the book is a work of popular science, Fleming also writes about people and their relationship to water. In Dutch society, for example, you can trace a centuries-long history of how the climate has changed, how river flows have changed in conjunction, and how that triggered the invention and adaptation of engineered and social systems. “That may teach us valuable lessons about what anthropogenic climate change has in store for rivers and related things like water supplies, flooding, and erosion and sedimentation, and how we might adapt,” he says.

One chapter poses a fascinating idea, that rivers have memories. But can rivers really recollect things?

“Though seemingly whimsical, the notion of memory is common in statistical time series analysis and environmental applications of machine learning. In the case of river flows, we use ‘memory’ as a sort of a trick for computationally capturing some really intricate and complicated physical water storage processes in a watershed. You’ve got soil moisture, ground water, wetlands, lakes and so forth, all of which are buffers, kind of like bank accounts,” he says. “They delay the onset of flooding. They’re also the reason streams keep flowing even weeks after it’s rained or the snowpack is gone. It’s memory in the sense of what happens now is related to what happened immediately before, and it can help form a basis for flood forecasting.”

Fleming also explores fundamentals, such as why rivers flow where they do. Sometimes they are told where to flow, such as where tectonic plates collide to create mountains and low points, or where glaciers cut out a valley. But sometimes rivers choose their own path, jumping channels or breaking off a meander bend.

Fleming’s humanizing of rivers is intentional. Ascribing human traits to rivers makes them relatable and inspires us to think about our world in new ways. Even Heraclites, Duncan and Poe would get a kick out of it. But unlike those lyrical writers, Fleming ensures that his abstractions and metaphors are grounded in sound science.

“It’s no accident that rivers are often ascribed human characteristics. Consider the description of the Mississippi as ‘Old Man River,’ for example, or even the more literal case of three rivers in New Zealand which were just given legal personhood there,” he says. “Each river has a personality, as it were – and that personality can be viewed through the lens of physics.”

Science Pub Talk: May 14, 2018: Sean Fleming, College of Earth, Ocean, and Atmospheric Sciences. The Boom and Bust Cycles of Rivers