Field work and Friendship: Geology students maintain connections and learning through the pandemic

For decades, Oregon State's Geology Field Camp has immersed students in the great outdoors, rock hammer in hand. The camp survived the aftermath of the Great Depression, WWII and university budget cuts. But in 2020, field camp courses faced their biggest challenge yet: COVID-19, which sent backpacks and tents into storage closets. Fortunately, a small group of geology students — all with unique backgrounds — kept alive the deep spirit of learning in place. They found creative and safe ways to go afield, forging a kinship that began with rocks but extended well beyond geology.

Beth Coleman, Raven Devaney, Ann Olesh, Kale’a Pawlak-Kjolhaug and Lauren Sankovitch met in GEO 295, a two-week field camp at a research field station outside of Bishop, California. It was September of 2019, before the world went wonky, and many students were getting their first taste of collecting geologic field data.

“This was my very first OSU class,” Sankovitch says. “I knew no one.”

Sankovitch has, in her own words, a non-traditional background: Her last job before starting at Oregon State was as a comic book editor. While she amassed impressive experiences with Marvel and other powerhouse publishers, she was completely new to field geology.

“There was a lot of learning on the fly and trying not to be completely overwhelmed,” she says.

The long days of making geologic maps, finding fault lines and describing rocks required collaboration and problem-solving. It was the perfect opportunity for the students to build a cohort and understand the importance of diverse approaches.

Sankovitch and the other four women forged an important bond, starting with this first field experience. 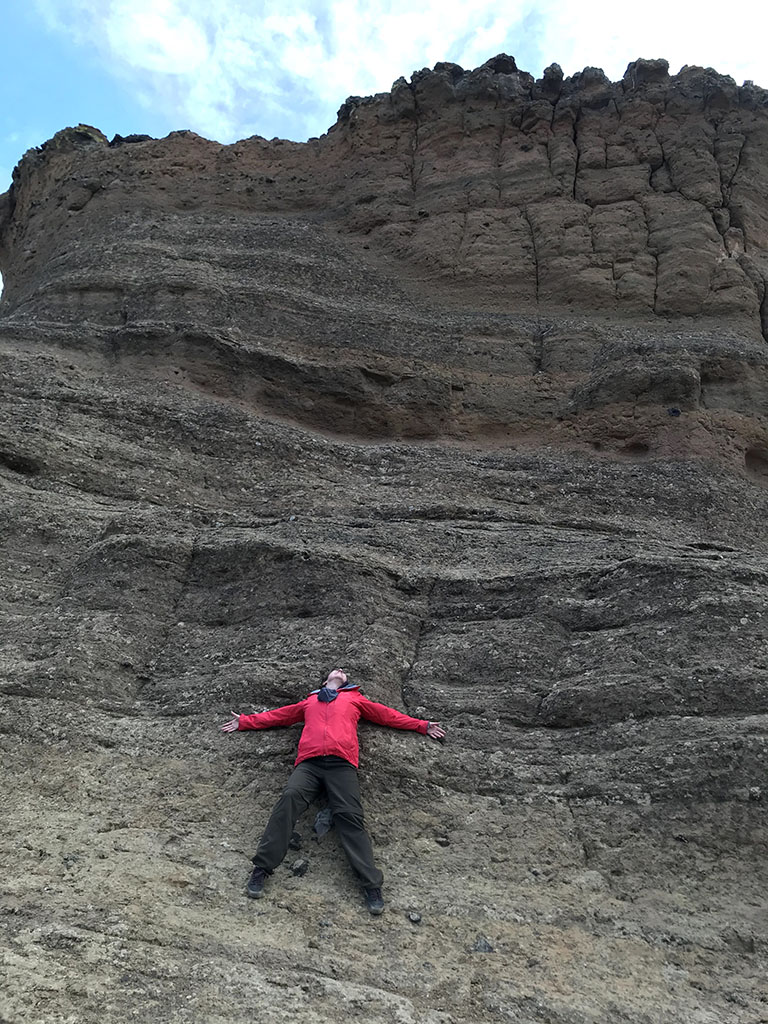 Several months after GEO 295, COVID-19 sent everyone home to learn online. There was no more chatting up professors or learning rock lithologies in labs.

For Ann Olesh, a mother of three with an interest in earthquake prediction, the at-home isolation was

particularly challenging. “It definitely wasn't easy in the beginning since there wasn't any place that was quiet. I had to get up really early, or stay up really late,” she recalls.

Olesh and her GEO 295 friends started a group text to check in on one another. She and Sankovitch formed a study pod to maintain a sliver of normalcy. When the Memorial Union opened up and the campus drop-in daycare center could safely operate, Olesh enjoyed some child-free study time with her friends.

Sankovitch says these small meet-ups were a saving grace. “Just to have those gals there, to have another human, to have support for certain classes, was crucial,” she says.

A bright (and memorable) spot

After a few months of learning online, all but one of the five friends would have another opportunity to participate in a field course, this time GEO 495, with COVID restrictions in place. The trip was cut from four to three weeks, but it was not short on adventure.

Students encountered a bear, coyotes, a cougar kill and a rattlesnake. They also survived trees falling on tents at midnight.

“I would do it again, without the falling trees,” Olesh says. “However, I got to hike around some impressive areas, [test] my skills on identifying faults and [find] incredible rocks. I also got to know some of the people in my cohort better.”

The Not-Geo Club trip to Steens

Annual Geo Club trips present another opportunity for students to bond during the school year, but the spring 2020 Geo Club trip to the Grand Canyon was scuttled by the pandemic. So, the following spring, with Beth Coleman leading the charge, the group of five students took learning into their own hands and organized an independent trip to Steens Mountain in southeastern Oregon. Most were graduating, and the trip would be a nice bookend to their geology program.

“We really wanted people to have a chance to come together, to spend time doing geology and camping, and to provide an opportunity to experience a Not-Geo Club trip in a scaled-back, COVID-conscious way,” says Andrew Meigs, one of the GEO 295 field course instructors and Geo Club advisor. “The strong bonds these students formed together underpinned the whole trip.”

Kale’a Pawlak-Kjolhaug, who first came to Oregon State to study fish and wildlife but later switched to geology, says the trip wasn’t just about rocks. Finishing the year in the midst of a pandemic brought into focus the importance of community — whether found during a masked meet-up at the Memorial Union, or an unofficial trip to the Oregon desert.

“Even beyond the field geology experiences, being surrounded by people who really care about each other fostered an environment that made you want to be there, even during really hard times,” she says. “A lot of what kept me going was this group of people I had the opportunity and honor to learn alongside.”