Depth perception: How much do Oregonians value their deep-sea habitats?

Andrew Thurber, assistant professor in both CEOAS and the College of Science, is accustomed to deep dives. He and his students study the microbes and food webs of deep-sea habitats from the North Pacific to the Antarctic, using cutting-edge equipment like remotely operated vehicles, specialized cameras, and state-of-the-art sensors. Thurber is now embarking on another kind of deep exploration: the ever-mysterious realm of social science.

In a pilot project funded by Oregon Sea Grant, Thurber has teamed up with OSU economist Steve Dundas to evaluate how much Oregonians know about the deep-sea habitats off their shores, fill in some of their knowledge gaps, and use the tools of social science to determine how much they value those dark, mostly unseen swaths of ocean floor.

The first notable attribute of Oregon’s deep-sea realm, Thurber says, is its vast extent. Deep-sea habitats, defined as those deeper than 200 meters (650 feet), comprise about ninety percent of Oregon’s state and federal waters (state waters extend out to three miles from shore and federal waters extend seaward an additional 200 miles). “The average depth of Oregon’s waters is 2,900 meters, or about 9,000 feet. The bottom drops off quickly relatively close to shore and then goes straight out,” Thurber explains.

The range of otherworldly habitat types contained within that area is mind-boggling. The flat, muddy plain is slashed by canyons almost as big as the Grand Canyon, and punctuated by sea mounts—mountains on the sea floor that serve as oases of life. Unique habitats form a patchwork landscape. “We’ve got a hydrothermal vent. We’ve got methane seeps—we used to know about five of them but in the past five years that number has grown to about a thousand,” Thurber says.

Thurber’s doctoral student, Sarah Seabrook, adds, “We’ve seen deep-sea coral and sponge reefs, methane seep habitats, economically important fish species, and more in Oregon’s deep sea. I am constantly surprised by the different kinds of life we discover in these areas, given that they’re experiencing so much pressure, no light, and often rely on a sparse rain of food coming down from the surface.”

Sarah Seabrook discusses Oregon’s deep sea habitat with an attendee at the State of the Coast conference.

Apart from the gee-whiz factor, why should Oregonians care about a part of the planet that they will likely only see on PBS specials with a David Attenborough voice-over? Thurber and Seabrook explain that we get an array of direct and indirect benefits from the deep sea, ranging from the tangible, such as commercially harvested fish (tens of millions of dollars of Oregon’s commercial harvests come from deep-sea habitats), to the more abstruse, like nutrients that fuel our healthy and productive coastal ecosystems.

Even more important, though, is the fact that new deep-sea resources are ripe for exploitation using existing and new extraction techniques: oil and gas exploration and mineral mining are all potentially on the horizon. The briny deep also contains vast marine genetic resources – compounds found in marine organisms that could have beneficial uses for those of us on land. “Scientists have found cancer-fighting agents and enzymes useful for biotechnology applications in marine genetic resources,” Seabrook says. “Could a cure for cancer be off our coast? Maybe.”

The current and potential uses of the deep sea will likely require policy decisions based on tradeoffs, as one use could affect others. For example, deep-sea mining could destroy bottom habitats for fish species. It will be important for policy makers to know Oregonians’ preferences for how these resources should be used. In order to make informed decisions, citizens need to understand more about what’s there, down deep.

Thurber, Seabrook and Katie Darr, a Marine Resource Management master’s student also working in Thurber’s lab, kicked off the Oregon deep-sea project by creating outreach tools and taking them to as many audiences as they could find. Seabrook created a poster outlining the resources and services provided by Oregon’s deep sea and took it to the State of the Coast conference last fall in Florence, among other venues. The group is working on an exhibit to be included in the massive remodel of OSU’s Hatfield Marine Science Center Visitor Center in Newport. They have also conducted two focus groups, one in Portland and one in Newport, to gather preliminary information about people’s knowledge of the deep sea and their attitudes toward exploiting and protecting it. 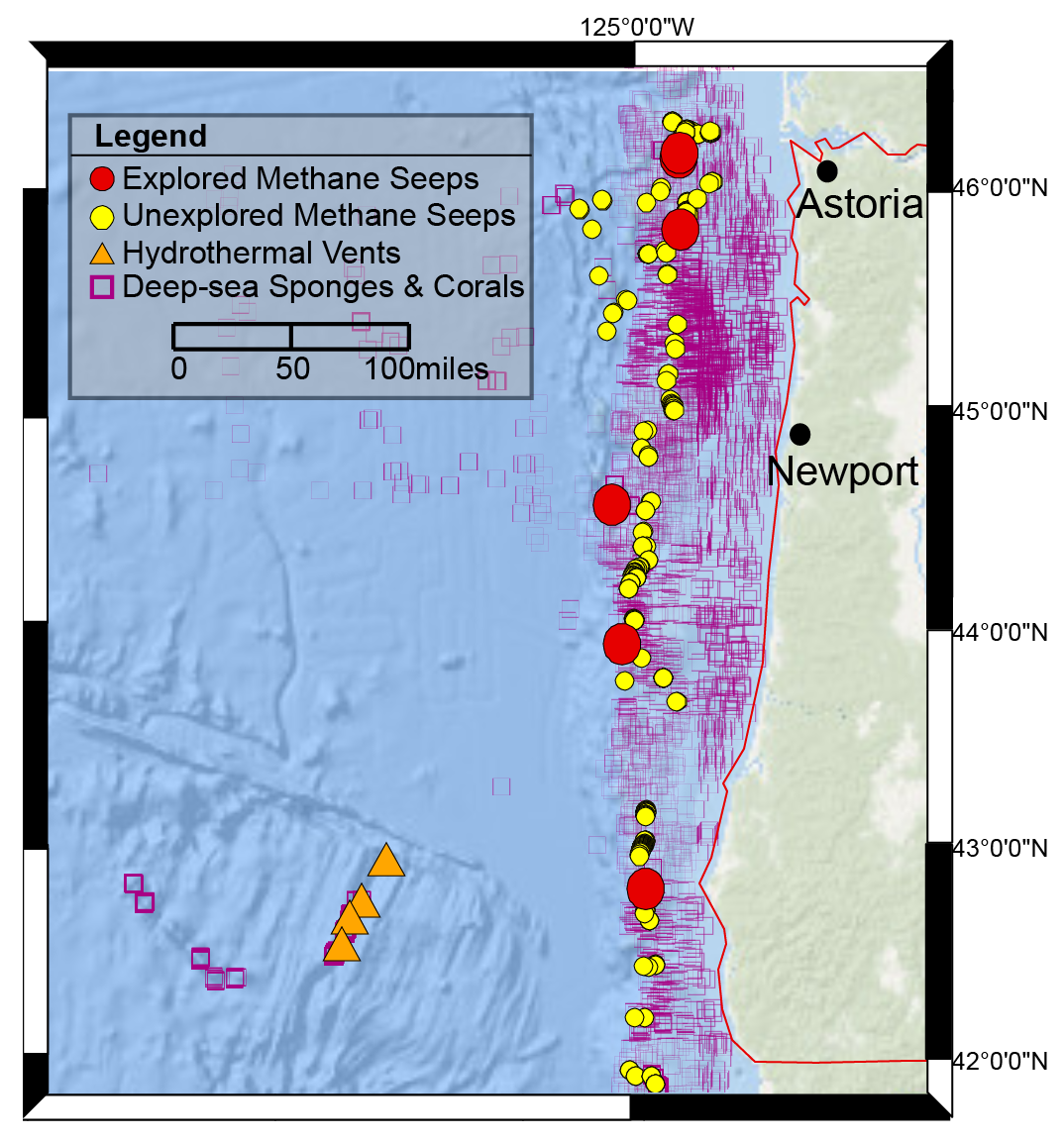 While the focus groups revealed differences between the knowledge base and attitudes of residents of Portland and of Newport, Thurber was surprised by how well all participants understood the function and importance of Oregon’s ocean. Some participants were so excited by what they learned about deep-sea habitats that they wanted to take the focus group materials home to their families.

The research team also drafted a beta version of a survey instrument they would like to use with a larger sample of Oregonians from around the state, testing it with the focus groups. The draft needs some refinement, according to Thurber, but the approach will remain the same: the ten-page survey will present information about the deep sea and ask about respondents’ willingness to pay for various deep-sea resources. This cutting-edge economic approach asks people how much, in real dollars, they would be willing to pay to preserve certain resources or invest in particular kinds of protections. Would they be willing to pay more taxes to protect essential fish habitats in the deep sea? How much? How much more would they be willing to pay for gas, for fish, for consumer electronics made without deep-sea-mined minerals to ensure protection of the deep sea?

The team is currently preparing a proposal for additional funding to expand the pilot project. If they are successful, the next step will be to distribute the revised survey throughout the state in order to get a broad picture of how Oregonians value the deep sea. The researchers’ timing is perfect: the federal government recently proposed lifting a ban on offshore oil and gas exploration, a controversial move that is still under review. Other potential threats loom as well: Japan recently deployed pioneering deep-sea mining equipment, and globally, the fishing industry is harvesting in increasingly deeper waters as shallow stocks are depleted.

Thurber emphasizes that his goal is to remain unbiased. “We’re not vilifying anyone,” he asserts. “You can say, ‘no mining,’ but then you might not be able to buy an iPhone next year,” since electronic components are often made with minerals, many of which could be mined from deep-sea sites. He and his colleagues just want to ensure that Oregonians know what they’ve got just off their coastline and that their voices are heard when it comes to making decisions about these valuable habitats.

Deep-sea dive at Heceta Bank, at a depth of 1200 meters