Humans have long conscripted animals into assisting with various jobs, from draft horses to carrier pigeons to therapy dogs. Recently, CEOAS scientists have turned to animal partners as well, asking for help from diving seabirds in collecting nearshore oceanographic data.

Researchers running the Cormorant Oceanography Project, including CEOAS coastal oceanographers Jim Lerczak and Greg Wilson, are affixing small data-collecting tags called biologgers to the backs of cormorants, fish-eating birds that live in coastal regions around the world. These small solar-powered data loggers record parameters such as water temperature and salinity, depth, location, and speed at which the bird is moving, and transmit the information via cellular networks to scientists on land.

Why use birds to do your oceanographic dirty work? The coastal ocean can be a tough place to work for humans on boats, tough even for underwater robots such as gliders that are in common use in oceanography. Greg Wilson explains, “For robotic vehicles, battery life is a problem, communication with the vehicle can be a problem, propulsion is a problem. And birds don't have any of those problems. Having an autonomous, distributed sampling platform is a great asset for studying the ocean.”

Jim Lerczak also points out that this data collection method can be long-lasting (some birds have been carrying their tags for more than two years, although a few months to a year is more common); it is also cost-effective: At $1,000 apiece, the biologgers compare quite favorably to paying for time on a research vessel, as just one bird might make 100 dives each day. 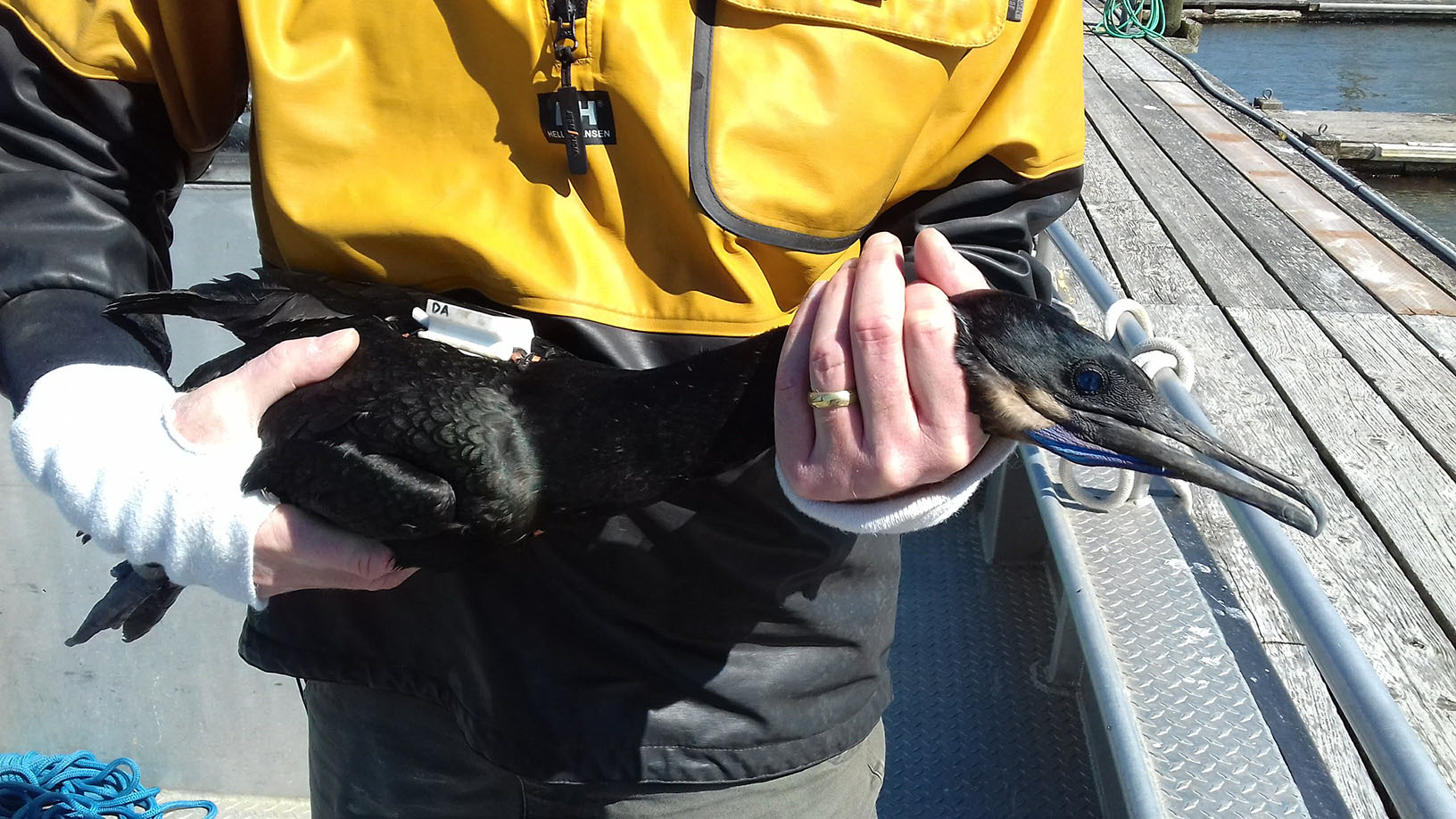 A Columbia River cormorant prior to being released with its new biologger. Photo: Adam Peck-Richardson

Since 2019, the project has collected data from more than half a million bird dives near the mouth of the Columbia River and at sites in Alaska and the Persian Gulf (where the group works with Sabir Bin Muzaffar, a professor at the United Arab Emirates University). All told, dozens of birds have collected data for the project in those three locations.

Lerczak and Wilson are master data wranglers, but they are not bird experts, so they have turned to other partners to affix the data loggers to the birds. The lead bird ecologist on the project, Assistant Professor Rachael Orben, who heads up Oregon State’s Seabird Oceanography Lab, explains one method for capturing Columbia River cormorants.

“The channel markers in the river work well as cormorant traps – the birds land on the top rails and then they eventually hop down to the bottom where they like to build nests. Usually they would just fly away out the sides of the square markers but we put mist nets [fine-meshed nets designed for capturing birds] around that bottom rung,” she says. Other techniques include scooping birds out of the water or snatching flying birds right out of the air with large nets.

The data loggers are affixed to the birds via a backpack-shaped harness, and Orben says the birds seem largely unaffected by their new cargo.

Once outfitted with the biologgers, the birds collect many kinds of data. The loggers sense when the birds are diving below the surface by measuring water pressure, and can therefore collect vertical profiles of water characteristics such as temperature and salinity. When the birds dive all the way to the bottom, they record water depth, providing information about bottom topography (bathymetry). When they sit passively on the surface, their movement, tracked via GPS, indicates surface current velocities. The scientists can even gather information about wave heights by measuring the birds’ vertical motion as they sit on the surface.

The data has already proven extremely valuable in a range of ways. In the Columbia River, where the bottom topography changes a lot over short time scales, cormorant dives are revealing bottom features that could be obstacles to navigation. Other data are being used to provide boundary conditions for models of the physical oceanography of the area, and revealing errors in already existing models.

A model of a geographic area is a mathematical simulation that can be used to understand the interdependent forces in the system and evaluate “what-if” scenarios. The more actual measurements you have in a system, the better you can train your model to simulate real life. Lerczak explains, “When we model an area like the Columbia River, we use bigger models to set what we refer to as open boundary conditions, that is, what's going on in parts of the ocean just outside the region we're modeling, where water flows into the modeled region. This project has shown that there are problems with some of those boundary conditions – temperature in particular sometimes needs to be corrected. So, we’re taking data collected by the bird loggers and using that to inform and adjust the model.”

While the project’s focus is currently tag development and acquisition of oceanographic data, Orben has high hopes for learning more about cormorant ecology from the data as well. Information about the connections between bird movements and their physical surroundings can provide a wealth of insights into bird ecology. “We could look at whether birds are avoiding being on the water in high wave conditions – do they sit on the water more or less during stormy conditions? How are they foraging relative to the thermocline? When do they make the decision to dive all the way to the bottom to feed? We're building a network of people who can use our tags to answer some of these questions,” she says. Ultimately, these avian-collected data may even be used for initiatives like marine spatial planning that will help protect the habitats of the birds themselves.

There are certainly challenges to using bird-collected data. The scientists have no control over where the birds go, and collecting a specific data point is not possible. And the data are messy when they first come to shore – picture 20 sets of data all containing different types and numbers of data points – and so the data need some extra “cleaning” before they can be used. In the end, though, the benefits outweigh the costs.

In the next two years, the team is planning to collaborate internationally with other seabird ecologists to equip avian recruits in new parts of the world – Orben says that the team is looking closely at the Asia-Pacific region, for example.

Coastal ecosystems are notoriously dynamic, significantly impacted by human activity, and critical for uses from recreation to shipping to fishing. The more data collection in these systems, the better, regardless of what species collects it.