At CEOAS, students are the heart and soul of what we do. We are proud of all of our students, graduate and undergraduate, and great students go on to become great alums. Read on to learn about three of our current outstanding graduate students. 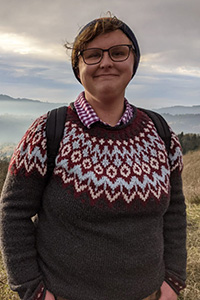 Schmitty (they/them) fell in love with both the outdoors and computer programming growing up in their native Minnesota, and is now working on a Ph.D. project that melds the two. They work with JC Creveling to understand global sea-level change during the ice ages by comparing observational data mapped from ancient beaches to numerical models of sea-level change. This work provides insight into what the oceans and ice sheets were doing as the Earth descended into the last ice age. Schmitty says the best thing about CEOAS is the community of graduate students — “I’m very lucky to be surrounded by other creative, curious scientists,” they say. 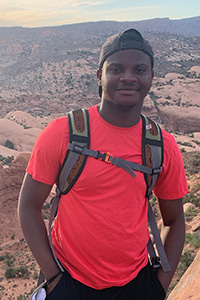 While some Earth sciences graduate students say that their childhood romps through the forest and excursions to the beach spurred them to seek formal science education, Jaquan (he/him) has a different story. He had little exposure to the outdoors growing up in South Carolina, which made him yearn to learn more about the natural world. He worked hard to overcome obstacles he encountered as a first-generation undergraduate and graduate student, making his journey through academia all the more rewarding. Now he works with George Waldbusser on a Ph.D. project assessing the effects of minerals that reduce acidity in estuarine sediments, and the impact those minerals have on sediment-dwelling organisms. Jaquan loves to make connections with others, respecting the stories that brought them to where they are, and he says that CEOAS serves as a great catalyst to foster those connections. 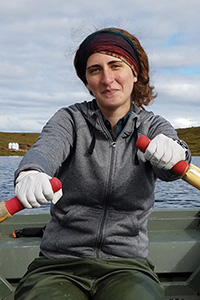 Natasha (she/her) is working with Byron Crump on a Ph.D. project that aims to understand Arctic microbial community dynamics on the North Slope of Alaska, with a focus on microbial response to climate change and other ecosystem disturbances. But growing up in Washington state and attending college (another first-generation student!) at University of Washington, all of biology fascinated her, from snakes to bats to fish. An undergraduate internship set her on the path to marine microbiology, and she is now an NSF Graduate Research Fellow. She has been scuba diving since she was a teen and once earned second place in an underwater pumpkin carving contest! Natasha loves the supportive community she has found at CEOAS, as well as the interdisciplinary approach to studying ocean ecology and biochemistry.