Iron man: Rene Boiteau wants to know how marine microorganisms get enough metal in their diets 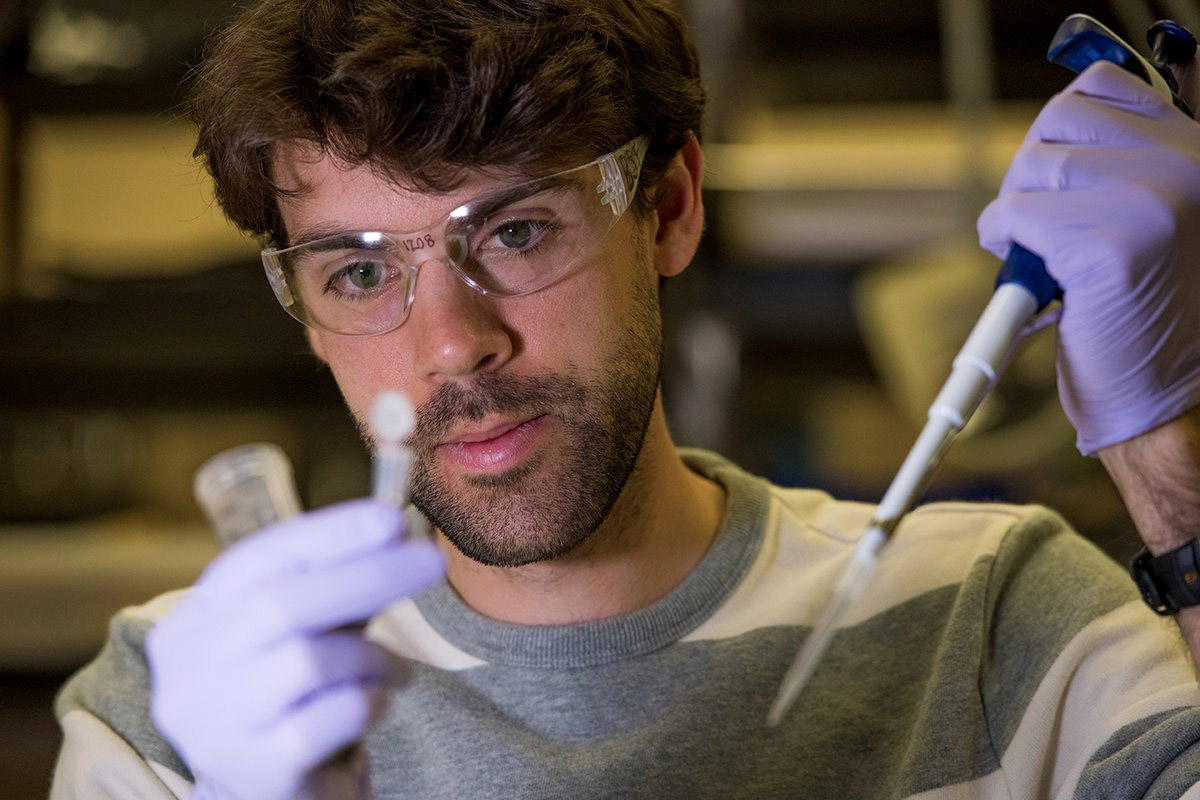 Rene Boiteau is new around here. The biogeochemist only joined the CEOAS faculty a couple of months ago; the walls of his second-floor office are still mostly bare, and his lab is not yet buzzing with the hordes of students he hopes to be mentoring soon. While he still probably hasn’t used up his first punch card at the Beanery coffee shop, he already has many irons in the fire, many of them related to, well, iron.

Boiteau is interested in how organisms use chemistry to orchestrate the flow of nutrients and energy in the world around them. A perfect example is the amazing biochemistry that allows marine microbial organisms to grow and thrive in ecosystems where biologically usable iron, a necessary micronutrient, is scarce.

In many places in the ocean, there are plenty of key nutrients like nitrogen and phosphorous, but oddly, not much primary productivity. Most of these places, known as high nutrient, low chlorophyll (HNLC) systems, are limited by iron availability, which is as necessary for productivity as N and P. Even when iron enters the ocean, usually via atmospheric deposition of iron-rich dust, it is highly insoluble in seawater, making it unavailable for biological use. In order to be used in biological processes, iron needs to be bound to a chemical called a ligand, which keeps the metal in solution.

Where can primary producers find these all-important ligands? Some bacteria have taken matters into their own hands. These bacteria have learned to make iron-binding ligands, called siderophores, themselves. “We’ve known about siderophores from biomedical research for a long time,” Boiteau explained. “Pathogens need iron for respiration, so they often produce siderophores to scavenge iron from the host’s blood.” It turns out that siderophores are out there in the marine environment as well.

Why care about whether bacteria are getting enough iron in their diets? For one thing, this process provides a foundation for extensive food webs that ultimately support the kinds of marine organisms we humans like to put on our dinner plates. In addition, primary production at the base of the food web affects processing of carbon in the ocean, with implications for large-scale climate dynamics. The littlest of microbes can, in fact, impact global climate.

Boiteau has conducted research from Hawaii to the California Current ecosystem to the South Pacific examining the distribution of iron and siderophores in the marine environment. He also uses cutting-edge imaging technologies, like high-resolution mass spectrometry coupled with chromatography, to try to determine the structure of the ligands, which can tell us more about how they work and where they come from.

One question that fascinates him is what happens to the siderophores once they are released into the ocean. How can the bacterial cells that produce these compounds use them efficiently if they are excreted into a dilute liquid environment? Do the cells release the siderophores, only to have the molecules “wash away” before they are used? Boiteau and colleagues have determined that bacteria in iron-starved regions of the ocean produce siderophores with long fatty acid tails that remain associated with the microbial cell wall so that the molecules are not excreted and set free to drift. “The microbes seem to be sort of using them as fishing rods” to acquire dissolved iron, Boiteau said.

In some areas of the ocean, such as the North Atlantic, iron is plentiful, thanks to iron-laden dust that is blown from as far away as the Sahara Desert and deposited on the ocean’s surface. But that still doesn’t mean that it’s usable for primary productivity. Boiteau and a colleague at University of South Florida recently received a grant to study how iron associated with dust is transformed into a usable nutrient in that region of the Atlantic. They will ask a number of important questions: How much iron comes from dust drifting and settling on the ocean? Is iron dissolved via the action of siderophores? How fast do the siderophores work to solubilize the iron?

In order to answer these questions, Boiteau and his colleagues will conduct some unique experiments. They will collect atmospheric dust from a land-based observatory in Bermuda, and then introduce the dust to filtered seawater samples while on research cruises in the Sargasso Sea and the Gulf of Mexico. Then they’ll look at which, if any, siderophores are being churned out by the microbes in the seawater samples. “We’ll ask what the composition of those ligands is and determine their binding strength,” which will tell them about the rates and efficiencies of the ligands, Boiteau explained. They can’t simply collect the seawater samples and look for ligands, because “it’s not only the ligands that are there when you conduct the cruise that matters; it’s the ligands that are produced by the microbes once the dust is added that are important,” he said.

Boiteau’s to-do list as the new guy is long. He plans to bring a high-resolution mass spectrometer to CEOAS, which will help him piece together the structure of organic molecules to aid his work and that of many others. He will be teaching chemical oceanography soon, and hopes to offer a class in aquatic chemistry within the next few years as well. He is trying to make time to explore his new home, hiking, camping, and soon, skiing in Oregon’s great outdoors. He’s taking advantage of the bounty of the Willamette Valley, enjoying the alchemy of cooking with Oregon produce. And maybe soon, he’ll even decorate his office.