Denizens of Earth, we need to do some thinking about carbon. We humans are burning it at an unprecedented rate to power our cars, heat our homes, and fuel our industries. That carbon, otherwise known as fossil fuel, ends up in the atmosphere in the form of carbon dioxide, CO2, where it wreaks havoc on our climate. The associated consequences are grave: rising ocean temperatures and sea levels, changes in rainfall and incidence of drought, acidification of our oceans, and more.

Wouldn’t it be great if we could collect and lock up some of that CO2 so it wouldn’t cause so much trouble?

Good news, Earthlings! Our planet provides many such lockboxes, in the form of “carbon sinks,” reservoirs where carbon is deposited and tends to stay for long periods. Examples include forests, soils, and, largest of all, the ocean.

Much of the organic carbon that winds up in the ocean, whether via deposition of atmospheric CO2 into the sea, erosion of soils that make their way into estuaries and coastal areas, or breakdown of organic material like marine plants, eventually accumulates in sediments, where it is locked away, or “sequestered.” One of the most important marine repositories for carbon is the mud that accumulates in salt marshes. These marshes generally sequester carbon more efficiently than most other ecosystem types. Carbon sequestered in marine sediments is referred to as “blue carbon,” and Rob Wheatcroft and his lab in Oregon State’s College of Earth, Ocean, and Atmospheric Sciences want to get the blues: They want to know more about blue carbon in Oregon salt marshes. 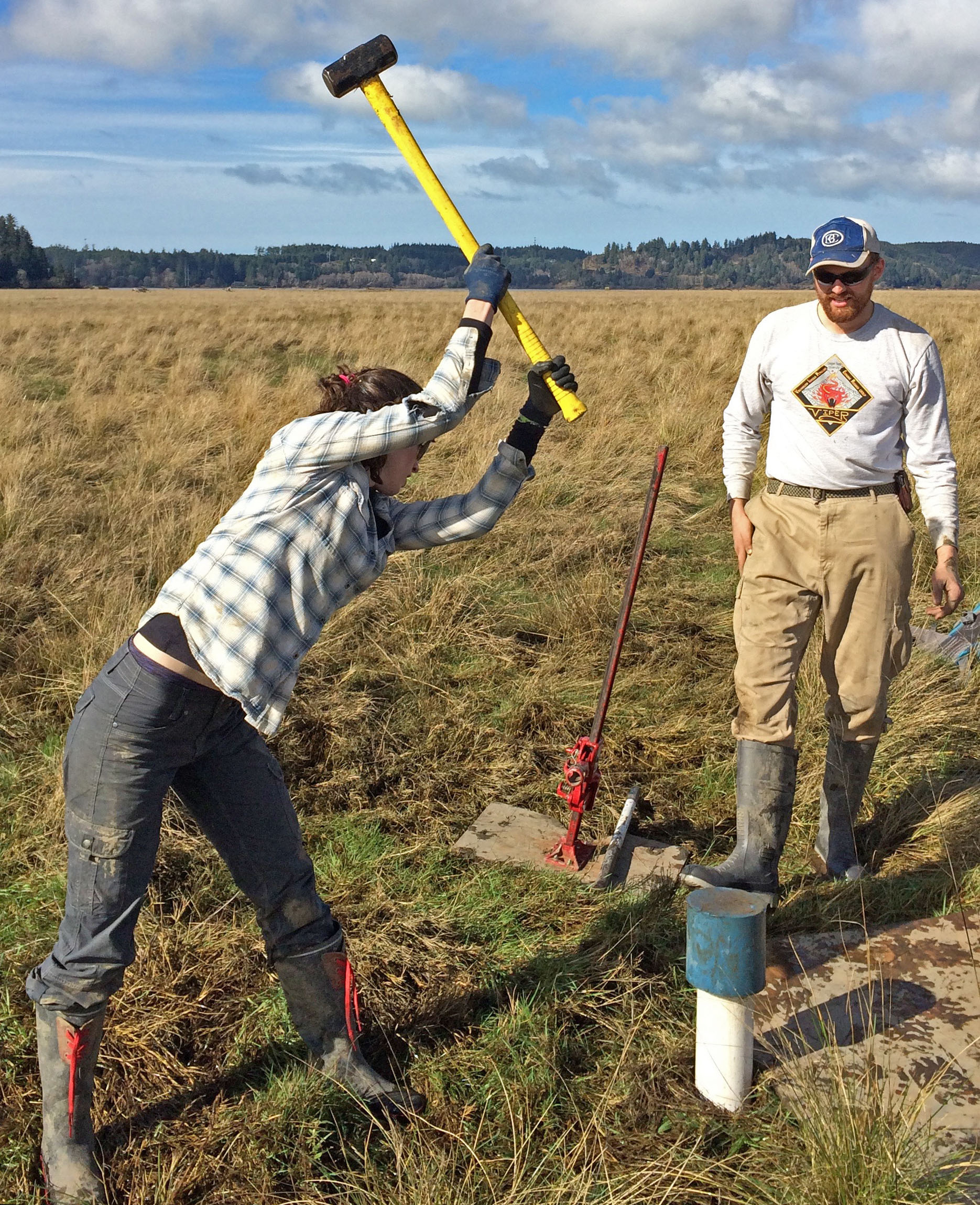 With funding from Oregon Sea Grant, Wheatcroft and his Ph.D. student, Erin Peck, are examining blue carbon accumulation rates and histories in a series of small estuaries along the Oregon coast. In order to study the dynamics of blue carbon, scientists need to understand the dynamics of sediment, because that’s where the carbon is. “Mud is underappreciated,” Wheatcroft declares. “Marshes provide a range of ecosystem services, functions that help human communities like providing habitat for fish and protection from storm flooding. But they can also help mitigate climate change by locking away blue carbon in their sediments.”

Sediment (and therefore blue carbon) accumulation in marshes is a matter of balancing deposition and erosion, both of which are affected by a range of factors. Dammed rivers deliver less sediment. Healthy marsh plants retain sediment and their productivity contributes to carbon sequestration as well. Big storms can bring waves that erode sediment. Sea level rise often creates more room for growth of mud-trapping marshes but if the water rises too quickly, marshes are unable to keep pace and plants can drown. No plants means less sediment and carbon accumulation. The interplay among these factors and others determines the net rate at which the mud piles up in estuaries, taking blue carbon along with it.

To dig into the history of blue carbon accumulation in Oregon’s estuaries, Wheatcroft, Peck and Laura Brophy of the Institute of Applied Ecology in Corvallis, supported by student volunteers, take vertical cylinders of mud, called sediment cores, from each site. Their field equipment is decidedly low-tech: They slog out to their estuarine sites, sometimes a walk of a mile and a half, and use a sledgehammer to pound PVC pipes into the mud vertically as far as they will go. Sometimes they need to stand on an orchard ladder to achieve the necessary leverage. To extract the cores, now containing a mucky history of the marsh stratified in layers that correspond to time, they use a truck jack.

The high-tech analysis begins once they get the cores back to the lab. Wheatcroft and Peck measure concentrations of a radioisotope of lead (Pb), 210Pb, in each centimeter of the column of mud. Because 210Pb decays over time, the profile of the isotope in the mud, from top to bottom, can tell the researchers the accumulation rate of mud in that sampling spot for approximately the past 100 years. They use other techniques to determine how much carbon is contained in each centimeter of the core. Together, these data can tell the researchers the blue carbon burial rate at each site. These are among the first measurements of this kind for Pacific Northwest estuaries.

“The vast majority of studies of this kind have been done in East Coast, Gulf Coast, European and Australian estuaries, where relative sea level is rising reasonably quickly,” Peck notes. “We don’t know how marshes respond to stable or falling sea levels like we have at many of our sites here in Oregon.”

Peck is especially interested in what happened to sediment and carbon storage in the years and decades following the massive 1700 Cascadia earthquake, information that could help forecast what is likely to happen the next time this fault slips. The quake, records of which are quite clear in sediment cores, drowned marshes when coastal lands suddenly and violently subsided. “The earthquake caused 1 to 3 meters of subsidence so what was high marsh then became subtidal. Over time sediment accumulated and it became high marsh again, but we don’t know the timetable for that recovery,” she explains. “A lot of our earthquake and tsunami preparedness focuses on what to do during the shaking, the appropriate evacuation routes, and what emergency supplies to keep in your garage, but we don’t think so much about what might happen to coastal ecosystem services in the decades to centuries following ‘The Big One.’”

In general, it’s important to know more about blue carbon so we can sensibly manage coastal marshes. This incarcerated carbon is not necessarily under lock and key forever – it can be released if marshes and other coastal habitats are not protected. “We have some say as to the future health of our salt marshes,” Wheatcroft says. “We can protect them. We can cease alterations; we can restore ones that have been degraded. These actions will increase a range of ecosystem services, of which carbon burial is only one.”